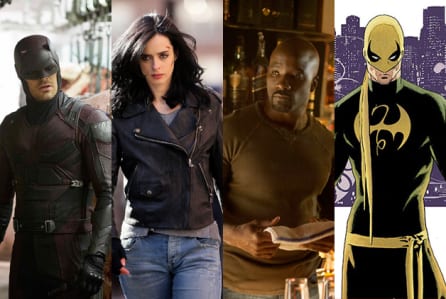 Marvel’s been pretty quiet about their upcoming crossover series, The Defenders. Given that only three of the shows had come out by the time the first teaser landed back at Comic-Con last year, that’s expected, but now that all four have released, the company is being more open about it. In the new trailer, we finally see our four heroes standing together in an elevator and they look….really tired. Of course, that doesn’t mean that Jessica Jones isn’t tired enough to not smash the elevator camera and reveal the show’s release date on Netflix: Aug. 18.

The Defenders will combine the universes of the four Marvel Netflix heroes–Daredevil (Charlie Cox), Jessica Jones (Krysten Ritter), Luke Cage (Mike Colter), and that Iron Fist guy (Finn Jones)–as they work together to save New York from the Hand, the secret ninja death cult that’s popped up in New York a few times. You know, because since the Avengers dealt with the aliens, these guys have to fight the evil ninja death cult.