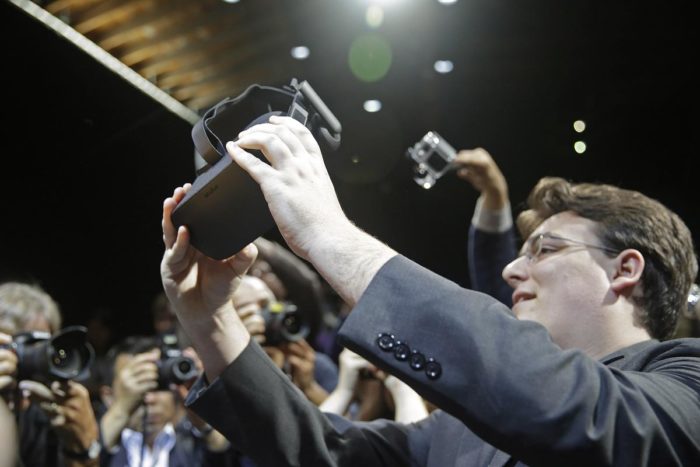 Two days ago everyone was celebrating and discussing the future of the Oculus Rift as the popular VR headset had officially reached one full year on the market. Now, Oculus co-founder Palmer Luckey has decided to leave Facebook without saying much of anything about the sudden departure.

It’s been three years since Luckey sold Oculus to Facebook for a whopping $2 billion and tomorrow will mark his very last day of being a part of the company, according to UploadVR. It remains unclear if he was fired or left the company on his own accord. Facebook has refused to answer any media outlet’s questions regarding Luckey’s departure but the tech behemoth did release a public statement about the matter.

“Palmer will be dearly missed,” Facebook began in a statement that felt oddly like it should have been saved for a funeral. “Palmer’s legacy extends far beyond Oculus. His inventive spirit helped kickstart the modern VR revolution and helped build an industry. We’re thankful for everything he did for Oculus and VR, and we wish him all the best.”

The public statement serves as a reminder that even as Luckey walks away from Facebook, the world will never be able to forget the impression he left on the VR industry… or on Reddit. Unfortunately for Luckey, walking away from Facebook won’t be enough to allow him to walk away from the looming cloud of controversy that has been following him around for half a year now. His most recent debacle came when it was discovered he donated $10,000 to a Reddit campaign aimed at insulting Hilary Clinton and showing support for President Donald Trump. Of course, nobody can truly find themselves drowning in backlash just for supporting a certain presidential candidate—even if it is one as polarizing as Donald Trump. Matters grew worse, however, when it was revealed that the organization behind the campaign was also affiliated with far-right media personality Milo Yiannopoulos.

Needless to say, Luckey being re-introduced to the world as a pro-Trump Yiannopoulos affiliate didn’t look great for a tech company that publicly promised to work on its lack of diversity and inclusivity. The scandal came shortly before Oculus Diversity Lead Amy Thole also bid farewell to the company and it caused several developers to threaten to boycott the Oculus. As if that wasn’t enough murky water for Luckey to wade through, his name popped up in headlines again after ZeniMax successfully sued Oculus for $500 million once they proved Luckey breached a non-disclosure agreement.

So did Luckey decide to walk away from the world of VR in pursuit of other ventures or did Facebook put the pressure on him to take his dark cloud elsewhere? Since neither Luckey nor Facebook are giving any details about the departure, we might not ever know for sure. What we do know is that no matter how cool and intricate VR games become, we will all still look drunk and confused when we’re playing them.