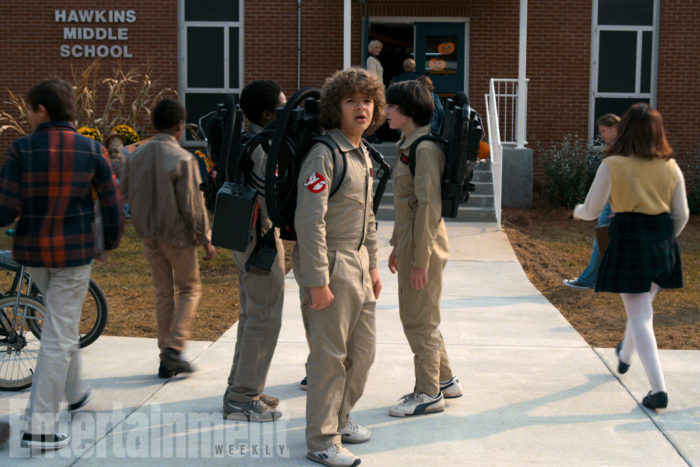 February has been a sort of coming-out party for Stranger Things Season 2, with its first image being released followed by its first footage being shown in a Super Bowl ad. Today, the show’s co-creators continued slowly pulling back the curtain by revealing some concrete story details to Entertainment Weekly.

As was recently announced, season two returns to Hawnkins, Ind. but takes place around Halloween of 1984, which is about one year after the events of the first season. And though Executive Producer Shawn Levy already revealed that, despite the monstrous Demogorgon’s demise, all of the evil glimpsed in the show to date wasn’t destroyed along with it, it now seems that the aforementioned evil may or may not be real.

The character Will was trapped in the terrifying Upside Down World for most of the first season. Even after his eventual return, all did not appear well for Will, as he coughed up a slug at the very end of season 1. Or maybe he just imagined that he did. “He seems to be seeing images from the Upside Down — the question is whether they’re real or not,” co-creator Matt Duffer told Entertainment Weekly. “So it seems like he’s having some sort of post-traumatic stress disorder.”

Will’s mother Joyce, who spent season one losing her mind over Will’s disappearance and presumed death, tries to help her son and his brother Jonathan by dating old high school classmate Bob, whom was previously revealed to be portrayed by Sean Astin. Winona Ryder, who plays Joyce on the show, thinks her character is “trying to mask a lot” and thinks introducing Bob as a “good father figure” for her boys will help in that regard.

And there’s of course more for Will and the gang to worry about in Hawkins than the supernatural. New characters Max and her older brother Billy are set to make their debut on the show next season, and while Max is a love interest for Will’s friends Lucas and Dustin, Billy could be trouble.

“Stephen King always has really great human villains. The evil in the real world is often as bad or worse than the supernatural evil, so we wanted to introduce a character like that,” explained Duffer.

That doesn’t mean the paranormal stuff is going to be ignored outside of Will’s visions, however. While Police Chief Hopper is going to do his best to cover up some of the otherworldly happenings from season one, the lab that experimented on Eleven and with rifts to the Upside Down World last season is still open for business, with Paul Resier’s deceptively friendly Dr. Owens now running it.

It’s not clear what Owens’ motives are, but whatever he’s up to, it would be surprising if it’s not tied to the upcoming season’s reliance on ambiguous “different kinds of horror.”