There’s a curious dichotomy in sports games that seems to persist, despite occasional attempts to bridge the gap. On one side, you’ve got the action-oriented, be-a-player approach that EA and others churn out with annual releases. On the other, there are the high-view management games tasking players with guiding a team to victory through less direct involvement in the game-by-game march towards championship. Today, we’re looking at Franchise Hockey Manager 3, Out of the Park Development’s latest within the latter category.

As an NHL licensed product, the Franchise Hockey Manager series has set itself up to fill a role that has otherwise been pretty well left to rot in the annual EA Sports NHL releases. If you’ve ever played EA’s “Be a GM” mode, especially within the last couple of years, you’re likely to have been left feeling as though there was quite a bit missing from the experience. Enter FHM, which offers a pretty extensive list of features and really builds on the foundation laid by Out of the Park’s earlier releases in other sports. 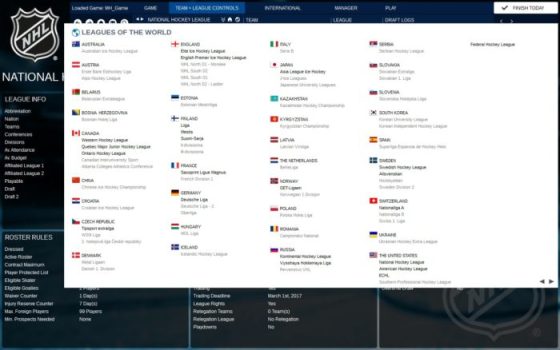 The first thing I need to say about Franchise Hockey Manager 3 is that while it’s incredibly detailed, it’s also extremely cumbersome. It may just be a matter of how much information it’s attempting to relay, and how all of that plays into the day-to-day operations of a major sports league, but the interface is remarkably stiff and complicated. Out of the Park does offer an extensive, screen-by-screen guide online, but it can still be overwhelming — especially when you first begin.

Most of your time in FHM3 is going to be spent working with the rough equivalent to Excel spreadsheets and numerous menus with which to navigate and manipulate the minutiae of running a team. Upon starting a new game, players are given a pretty decent amount of freedom with regards to their approach. You’ll get to choose your manager’s name and nationality, as well as pick a team you’d like to run — or, take the gamble and begin your quest unemployed and waiting for the offers to roll in. There are some basic stats, such as negotiating skill and player motivation, that determine your strengths as a manager and/or coach. 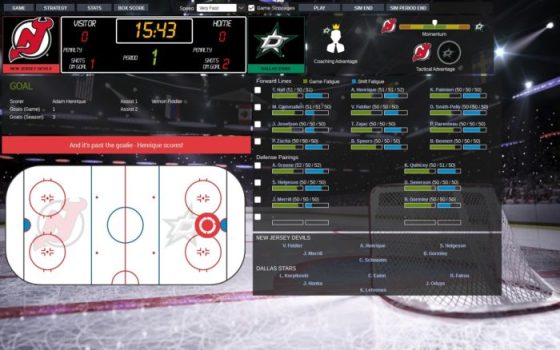 Of course, even on a management level, any sport is still about a single goal: winning and getting your team the coveted championship trophy. To that end, FHM3 allows players to “watch” games rather than simply see the end result. It plays out much like the “ice tracker” feature on the NHL website, with a rink display that lights up the ongoing action with quick blips showing the location of passes, shots, hits, and other in-game events. Players can adjust the speed of play here to suit them, and toggle the option to have the simulation stop when play is stopped for any reason or simply let it roll. Goals scored and period ends will stop the clock regardless of your choice, though, so keep an eye on it if you’re doing other things along the way.

Outside of the stat-centric in-game view, FHM3’s blocky and occasionally incoherent interface is its biggest stumbling block. The game’s menu colors appear to vary based on the team you’re managing — this is important, because my time spent running the San Jose Sharks was also spent using an intensely difficult white-on-white top menu, meaning I had to hover over each option to find the one I wanted since I could only read what my cursor was over at any given moment. This might sound like a joke, but I assure you, it is not. 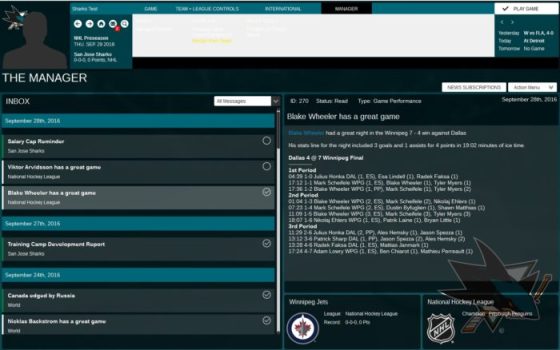 Beyond its labyrinthian menus and stiff interface though, FHM3 still offers a well-rounded experience for the budding would-be General Manager. There’s not a lot added on from previous entries in the series, but that’s not necessarily a bad thing. Full control over player movement, role assignment, and team strategy gives you a lot to work with. The trade system, while not especially realistic and lacking in feedback, is still miles ahead of what you’ll find in a less dedicated game.

Suffice it to say, Franchise Hockey Manager is by no means an all-audiences game. You’ve got to be a certain sort of fan to enjoy any management sim, I think, and slogging through FHM3’s difficult interface is likely to turn away even those who would otherwise serve as its core audience. Still, if you’ve yearned for a title that expands on the paltry offering built into EA’s ongoing NHL series — and you don’t mind a steep learning curve — this is probably exactly what you’re looking for. You can pick the game up on Steam for $39.99, or $53.98 as a bundle with Out of the Park Baseball 17.