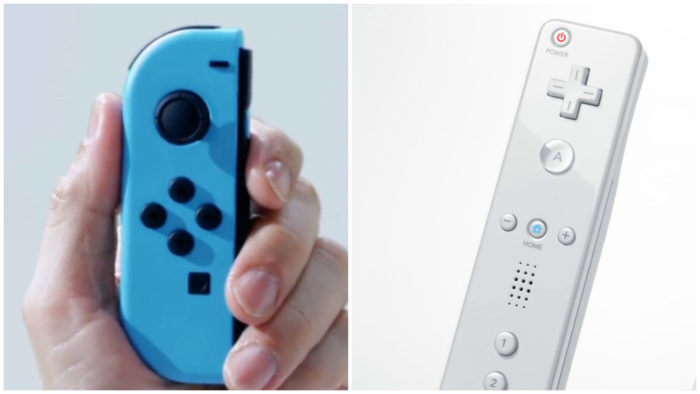 Last night brought Nintendo fans something they’d been waiting on for a very long time, a proper Switch reveal. After the first video was shown off back in October, there was a lot of intrigue surrounding the home console that was able to be taken wherever thanks to its handheld functionality. What was even more exciting was that Nintendo stated that the Switch (which at the time was still going under the codename NX) was in fact a something new, not a new version of something we’ve seen before.

Nintendo had fallen into a rut of gimmicks and odd choices for the past couple of generations. While those gimmicks helped the company sell the Wii and break records, completely dominating both the Xbox 360 and PS3 in terms of hardware sales, those same ideas didn’t exactly work with the Wii U, which is why we’re getting the Switch just over four years after its predecessor’s release. Yet, last night brought a bit of confusion when the reveal seemed anything but brand-new. In fact, it seemed a bit too familiar.

At first, while discussing the console, it appeared to be a simple recap of that initial video that felt like an eternity ago. Here is a console that you can take with you wherever you wanted. It has Wi-Fi capabilities, there’s a new online network so you can keep in touch with as well as play with your friends, and it’s even at a competitive price point. But once the Joy-Con controllers hit the stage, a song and dance we hoped to never see again took over the screen. We were watching Wii-mote demonstrations again, only they were oddly shaped and colored differently. This was a Wii demonstration, yet we’d been roped in believing that we were going to see the future of Nintendo.

There was a period showing off how accurate the Joy-Con controllers were, shaking ice in a cup, feeling realistic feedback based on the position of ice in said cup. We’re not trying to sell this short, that type of tech is impressive and can definitely lead to some immersive gameplay. All Nintendo had to do was show a brand-new, modern game for the Switch that could put that sense of reality at the forefront, but instead they showed 1-2-Switch. It’s an eclectic pack of games all set to show off just how many uses the controllers have. It wasn’t a new Metroid, not some interesting third-party collaboration that shows off the Switch’s tech as well as the company’s newfound third-party support. It was a game that screamed Wii, with its simplicity and lack of purpose outside of proving a gimmick. Think WarioWare, only without the lovable oddity and no established character to prop the experience up.

That alone would’ve been enough to show of the Wii-mo… err, Joy-Cons, but there was another game just for that as well. Arms, a colorful fighting game that will use your movements in the real world to build moves and combos in the game. May he/she with the most stamina win. It was interesting, yes, but not what was expected for a conference revealing a console that was said to be something unique and different.

After showing these games off, Nintendo had an opportunity to show just why the Switch is special and different from everything that came before it. They’d mentioned the ability to take it on-the-go, and also that you could link eight consoles which was great, but there was nothing to show why that was necessary. We knew about the mobility, what was needed was how that mobility separated the Switch from the PS4 and Xbox One outside of just being able to go… well, outside.

Instead, we just got a few trailers for games, most of which will not be available on day one. Don’t get us wrong, several of these games did look quite impressive. Super Mario Odyssey looked quirky and odd and instantly like something you just have to try. Seeing Nintendo’s mascot run through a dessert, or navigate a real-world city showed that the creativity we’ve come to expect was still alive and well. Fire Emblem Warriors is going to capitalize on Koei Tecmo’s success with another popular property you may have heard of called The Legend of Zelda. It will be interesting to see how they integrate strategy and the triangle system into the action.

The games were good, but they felt expected. There was no wow. If you were a fan of the Wii, or its successor the Wii U, you could’ve easily predicted every announcement, right down to the fact that there would only be one major exclusive available day one. Then there was the constant need to stress “Switch” sort of like how the Wii ads with roaming salesmen saying “Wii would like to play.” It all just felt like a running gimmick that Nintendo no longer realized it was caught within.

What’s most troubling is that just a few months ago, Reggie acknowledged that it needed to handle messaging for the upcoming console well. Yet, we can’t help but feel like they completely dropped the ball which is worrying for the future of the Nintendo Switch as a whole. The excitement for a true contending member of the Big Three was deflated by what is apparently a more powerful Wii. If that’s the message they wanted to send, then more power to them, but if not it’s time to go back to the drawing board, and fast.

There’s a lot of potential in that little box that is due out on Mar. 3, but that means nothing if that potential isn’t conveyed clearly. Cute little controllers and games that read your punches are neither new nor exciting. We’ve seen it done before, it was Nintendo that brought it into our lives. The company is known for innovating, so hopefully there is something up their sleeve that they plan on sharing very soon, but until then it seems like they’re falling back on old tricks.

Sure, adding in real online functionality and big third-party games is something new in a sense, but it’s not convincing us that the Switch is anything more than the same song and dance.