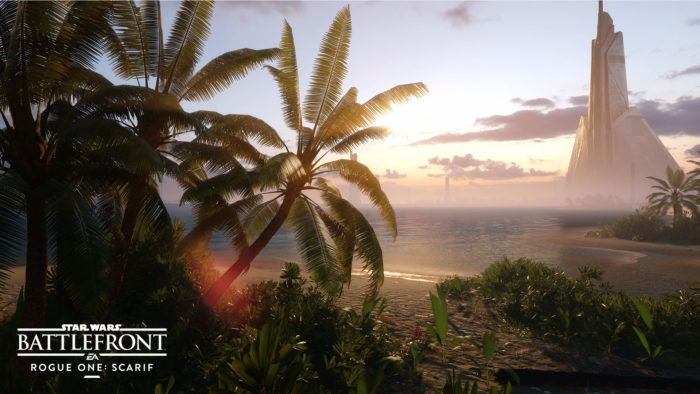 Star Wars Battlefront receives its fourth and final downloadable content today which features locations and characters from the upcoming film Rogue One: A Star Wars Story. Titled Rogue One: Scarif, the expansion is now available for season pass and Ultimate Edition owners. Everyone else can purchase this piece individually on Dec. 20.

Rogue One: Scarif has four new maps located on the planet Scarif and a new game mode called Infiltration that has players fighting across the surface and space to conquer objectives. Rebel leader Jyn Erso and Director Orson Krennic are two new playable characters, and are based on Felicity Jones and Ben Mendelsohn from the movie.

A big patch for the game launched alongside the DLC today adding new content for all players. The patch adds two new pistols (A180 and DT-29), the Sonic Imploder Star Card (a combination of a regular grenade and a flashbang), balance changes to heroes and weapons, bug fixes, and raises the level cap to 100. You can check out the full list of patch notes here.

In related news, Star Wars Battlefront is coming to the EA Access Vault for Xbox One on Dec. 13, while Rogue One: A Star Wars Story releases in theaters a few days later on Dec. 16.