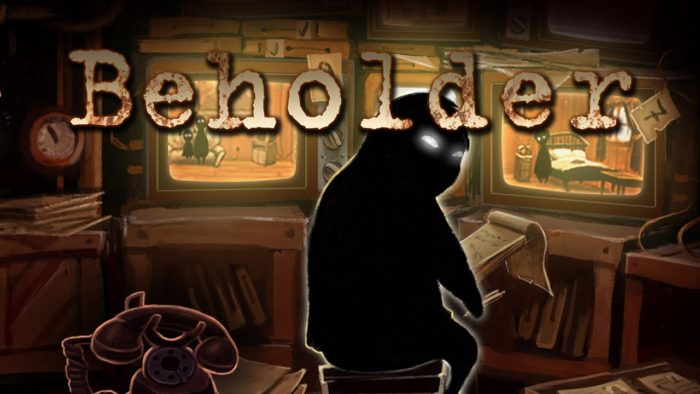 Drip, drip, drip… You know that alarming feeling when you hear a drip? Someone hasn’t turned a tap firmly enough, or the shower hasn’t been shut off properly. If you don’t go and investigate it then it’ll only nag at you. Beholder is a game that revels in this feeling, over and over again. When you plug one hole, you can hear another drip straight away.

You are the manager of a tenement building in what feels like 1980s East Germany. Your mission as a totalitarian state-installed civil servant is to surveil your tenants, be it by bugging their apartments, peeping through their keyholes, or probing them for information in what they think is casual conversation. You’ll be ordered to bust a tenant for breaking some state rule (these come trickling in on your news feed and grow increasingly bizarre), but an opportunity might arise to blackmail them for more money than you’d otherwise make – this comes in handy for things like paying for your son’s university text books or a bottle of whiskey to soothe your mounting stress. Every action you make results in both a positive and negative outcome.

You start to slip into a pleasing rhythm when you play the game; the meat and drink of what you’re actually doing is steeped in the minutiae of the mundane. It is mechanical: mousing over objects, rifling through desks, clicking through conversations hungry for scraps of information you can use. From there it progresses to seedier pastures: the blackmailing, the reporting, the abuse of power, and eventually far worse. There’s a numb feeling that washes over you after a time. It happened fairly early on for me and when it did it reminded me of a line from Scrubs. There’s a scene in which Dr Cox breaks down what they do as doctors for JD; it culminates in him saying, “It’s about keeping the ball game going. Everything we do here is a stall; we’re just trying to keep the game going – that’s it. But, ultimately, it all ends up the same way.”

That’s how it feels to play Beholder. You might have more money right now, but someone may have been undeservedly beaten and arrested, or worse. You may be able to afford tablets for your sick daughter, but now you can’t afford to pay off your blackmailer. It all keeps ticking along. Drip, drip, drip…

If you’ve played Papers Please then you’ll have an idea of what to expect here. Beholder takes this central gameplay idea – that of making a series of small bureaucratic choices which affect the lives of ordinary people – and infuses it with a sense of lived-in claustrophobia. I started to feel like Gerd Wiesler in The Lives of Others after a while, detached but obsessed by those caught in my web. Of course being Gerd Wiesler wouldn’t really be all that fun, would it?

The art style funnels the harrowing subject matter into a cartoon, softening some of the bleaker blows. The color has been bled from every scene; the skies overhead are iron-grey; and the tenants scuttle to and fro like insects. There are some touching moments: finding your daughter’s lost teddy bear, bringing some fancy soap home for your wife – these bring warmth into the shuttered dank of the rooms. They make people out of little smudges in the dark.

The main problem here is that while what you’re doing is food for thought – to a degree – it isn’t actually all that fun. There are fleeting moments of satisfaction to be had when small goals are met, but these don’t really resonate – they aren’t given the chance to.

Playing Beholder through to its conclusion, of which there are multiple, feels similar to reading 1984. I feel I’ve been delivered an essay in novel form; I haven’t actually really connected with the chess-piece characters and there is no beating heart to it. While this is most certainly a deliberate choice, it doesn’t help the cold I am left with.

In the case of Beholder it’s more than just that feeling of being left cold: it’s not actually having much fun. It’s repetitive as well. The first time you weigh up whether or not you can key open someone’s door before a neighbor comes up the stairs, it’s tense; the subsequent dozen times are markedly less so. The game isn’t a very long one, but it still gets tiring before the end. Though you could argue that replays are encouraged when there are so many different choices to make and outcomes to see, the thought of playing it through again isn’t an appealing one.

I also think it’s worth noting the degree to which it is food for thought. I don’t believe that Beholder is really trying to say very much politically beyond ‘boy, those totalitarian regimes are rough huh?’ But it doesn’t really have to say much, because its strength is in how it grounds difficult choices in the mundane. The interior of the tenement building is a fantastic nest of voyeurism, and the game injects the awful things you’re doing with a sense of tongue-in-cheek wickedness. It may not be beauty that lives in the eye of this one, but Beholder does have some intelligent moral conundrums to levy at you. Unfortunately, the repetition and dull play leave a big hole in the middle where the game’s heart should beat.