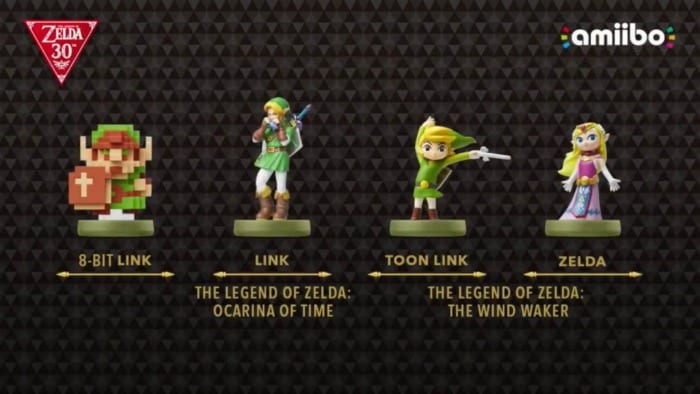 Nintendo has found a rather interesting way to celebrate the 30th anniversary of the launch of the original Legend of Zelda. The company announced at this morning’s Nintendo Direct that it is going to be bringing a new line of amiibo to market on Dec. 2.

Each one of these new amiibo will represent a different kind of Link character from the long running series including an homage to that very first title. 8-bit Link, Link from the Ocarina of Time and a Toon Link from The Wind Waker will all be available by the end of this year.

It should be pointed out that this is a brand new Toon Link and is different from the one released earlier this year as part of the Super Smash Bros. amiibo. In addition to these figures acting as standard amiibo in Nintendo 3DS and Wii U games, the company has also said there are some special perks that will be introduced.

The firm teased there will be some special functions for these Legend of Zelda amiibo when Legend of Zelda: Breath of the Wild launches. Unfortunately there was still no new information on when exactly we can expect that game and it’s still slated for release sometime in 2017. These new Legend of Zelda 8-bit Link, Toon Link and Ocarina of Time Link are coming Dec. 2.