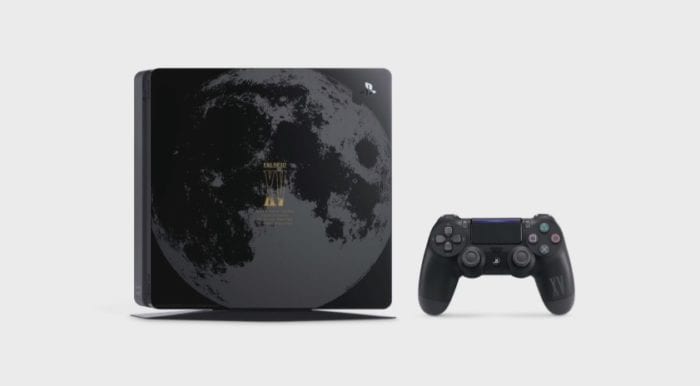 Update: Sony shared in a blog post today that the Limited Edition Final Fantasy XV PS4 bundle will be available outside of Japan as well:

“The box also includes Final Fantasy XV with an exclusive Steelbook, the new DUALSHOCK 4 adorned with an XV graphic, the Kingsglaive: Final Fantasy XV Movie Blu-ray, and multiple pieces of DLC – the Royal Raiment Outfit, Masamune Weapon, and Leviathan Regalia Skin. This bundle will be available exclusively at GameStop (EB Games in Canada) for $449 USD/$549 CAD.

After kicking off the TGS livestream with an epic rap remix montage, Sony and Square took the stage to reveal new footage of Final Fantasy XV alongside a Luna Edition PlayStation 4 Slim.

The team worked to create “hardware with a story line,” one that will appeal to adults as they unravel the gameplay experience. The design is inspired by Noctis, and his frequent gazes into the sky. They ended by noting that they hope the FFXV experience will live up to the users’ expectations, and hope the users will live up to FFXV as well.

The Luna Edition PS4 will release November 29, the same date as the game’s release as well as the release of Kingsglaive Final Fantasy XV.

For more on PlayStation’s TGS Press Conference, check out the stories below: