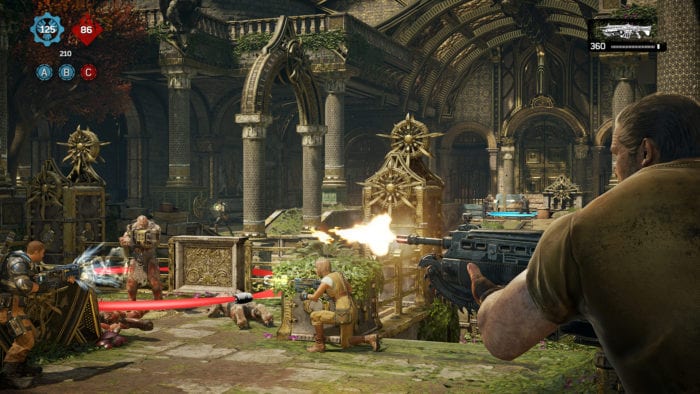 The release of Gears of War 4 is just under a month away. It is so close that The Coalition decided it is time for them to release the full achievement list for the game. They also revealed a lot of new information on the upcoming gear packs feature.

The achievement list is broken down into four distinct categories. No need to fear, The Coalition took the liberty of blocking any spoilers out of the list.

Whoomp, There It Is! – Knife execute an enemy that was yanked over cover by another player [5G]

I Live. I Die. I Live Again! – Rescue someone from inside a Snatcher [5G]

Ready for More – Complete all campaign Acts (any difficulty) [10G]

Remember the Fallen – Recover all COG Tags during the Campaign [15G]

Chest Candy – Earn one of each launch Ribbon [10G]

How’s it Going to Work? Teamwork! – Win a Casual Co-op Versus match [5G]

At First I Was Afraid, I Was Petrified – Survive the first 10 consecutive waves of Horde in a squad (any difficulty, any map) [10G]

Bilford Bogin! – Complete 50 consecutive waves of Horde in a squad (any difficulty, any map) [25G]

Oh What a Day! What a Lovely Day! – Complete 50 consecutive waves of Horde as Soldier on Insane in a squad [20G]

Give a Name. Any Name. – Complete 50 consecutive waves of Horde as Sniper on Insane in a squad (any map) [20G]

Call a Dr. If Lasting More than 4 Teammates – Resurrect 4 teammates using the Fabricator in a single session (any difficulty) [5G]

The whole list is pretty standard for another Gears of War title. Some achievements are even recycled from old games, like that for doing an active reload so many times. The more interesting aspect of The Coalition’s latest developer blog is the details they released on the game’s gear packs. Gear packs are bought by in-game credits that are earned by playing any of the online modes. Opening a gear pack can net the player a number of nice items, like new characters, weapon skins, or even skills.

Every player who purchases Gears of War 4 will be gifted one free pack, and Ultimate Edition buyers or season pass holders will get seventeen additional packs. That is a nice way to start a Gears of War 4 career. Any of the cards that are obtained through gear packs can be destroyed and made into scrap. Scrap is the currency used in this game’s crafting system, and can be crafted into any item.

The main way to purchase gear packs is with in-game currency, but they can also be bought with real world currency. There are a few different types of gear packs, and the more expensive packs will carry the better rewards.

There are no items in this gear pack. Instead, the player will receive five bounties to be equipped before the match. Bounties are like challenges that reward experience and more credits when completed.

This pack contains four Horde Skills and one Horde bounty. A Horde Bounty works the same as a Versus Bounty, once the bounty is completed the player will receive experience and credits. Horde Skills are specific skills that can be used in the Horde 3.0 mode.

This gear pack holds four random cards and one guaranteed customization item. The cards can essentially be any item: skins, characters, bounties, or skills.

The Elite Pack holds five customization items, and one is guaranteed to be a rare or higher item. This is where the Horde Skills and the Bounties are no longer included in the packs. Only customization items are contained in this pack.