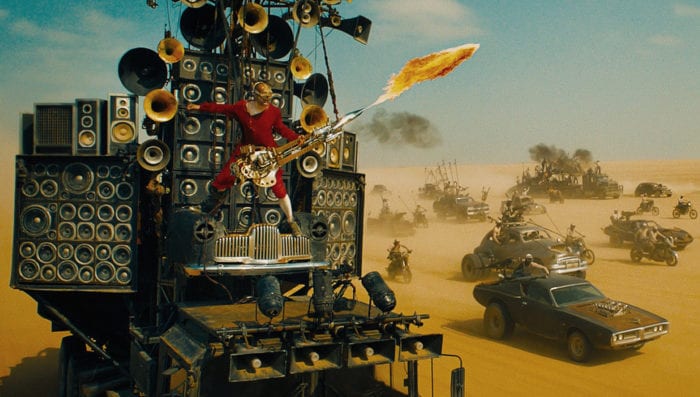 With Wrath of the Machine’s released last Friday, thousands of Guardian’s have attempted it in order to vanquish the final boss and get all that awesome loot. However, along this journey Destiny players began to notice that the giant death machine known as the Siege Engine seems to have taken inspiration from the Mad Max film series.

For those who don’t know, the Siege Engine is a giant, rolling machine that spews fire, electricity, and has a giant spiked ball arm on one side. Players are tasked with not only boarding this vehicle but repairing it once it bulldozes through some enemies and a metal wall. It’s an incredibly memorable moment only enhanced by some seriously badass rock music that rings out during the fight.

Earlier today Reddit user OnDrugx posted a simple request to Bungie, asking if they would add a flamethrower, guitar wielding Vandal at the very front. This would be an obvious homage to the very same character in director Geroge Miller’s critically acclaimed Mad Max: Fury Road. In the film, the “Doof Warrior” was strapped atop a massive truck and acted as the main villain’s moral booster for his troops.

Sure, the addition may not exactly fit with the Destiny lore, but Bungie is known for putting tons of easter eggs and little secrets into their game. Even in their own ViDoc, one of team members mentions that the Archon’s Forge was inspired by Mad Max: Beyond Thunderdome.