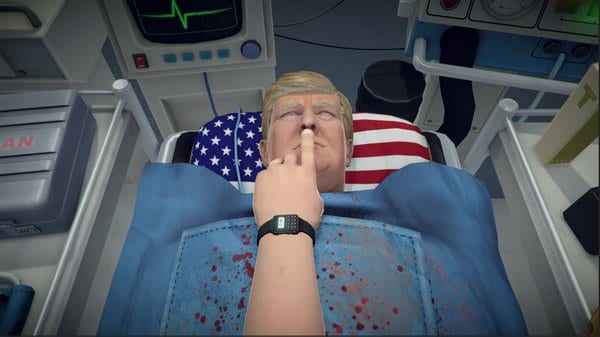 If you’ve ever wanted to give Donald Trump a heart transplant (don’t look at me like that, someone has probably thought about it), Surgeon Simulator has got you covered. The new update allows players to perform open heart surgery on the reality TV star.

Appropriately titled “Inside Donald Trump” (ew), this version has a bit of a twist to it. Instead of giving Trump a regular heart for normal human beings, you can choose to give him a heart of gold or a heart of stone. Bossa Studios will keep track of who chooses which heart, and will also post the results at a later date. It’s probably going to go how one could expect, and currently, 60% of surgeons have given him a heart of stone.

The Surgeon Simulator update also adds Trump Steak and Trump Vodka, and you can also tug on his hair while he’s unconscious. Don’t lie to yourself, you know you’ve wondered about it. Once you’re done with the surgery, players will receive a bill that gets higher with each instrument you use during the surgery, no doubt an accurate reflection of every day life.