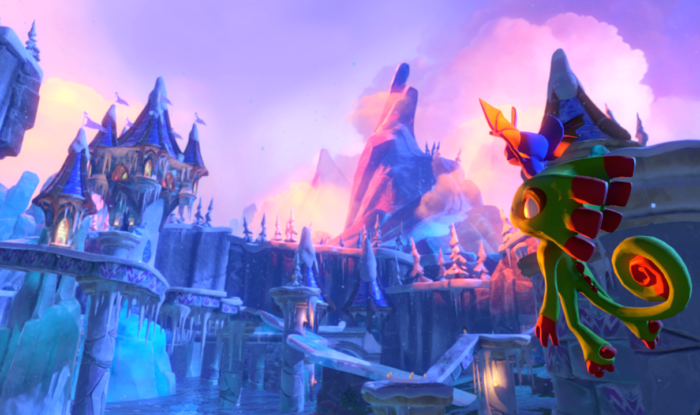 As a nice surprise, the folks over at Playtonic decided to share a nice surprise with the video game community, including the people who invested in the creation of the upcoming platformer and spiritual successor to the Banjo-Kazooie series, Yooka-Laylee. Since its inception in 2012 when former Rare employees assembled to create the game, we have seen several videos and images of the gameplay, but this is the first time Playtonic has proudly raised the curtain on the near-final product.

Playtonic starts off with revealing who the villain of Yooka-Laylee will be. The protagonists of Banjo-Kazooie, naturally Banjo and Kazooie, were constantly at odds with the wicked witch Gruntilda, so fans would likely expect to find another excellent villain at the helm of Yooka and Laylee’s obstacles. The villain of Yooka-Laylee will is named Capital B, and he’s a greedy head of an villainous corporation hellbent on stealing all of the world’s literature and turning it for profit.

Various gameplay elements were also shown off, explaining how there will be objects called Pagies scattered throughout the world, not unlike the Jiggies from Banjo-Kazooie. These Pagies are essentially pages of the books being held captive by Capital B, and should sate those yearning for the collect-a-thon features of classic 3-D platformers.

Similarly, Yooka and Laylee will also be able to collect Quills, which they may use to add new moves and abilities to their repertoire. By letting players choose which moves they would like to unlock in whichever order they please, players are given that small freedom of a more personalized experience as they play through the game and learn what they would like to prioritize.

Playtonic also wanted to remind the Kickstarter users that made the game happen that there will be the Toybox that was initially promised as a funding goal, and it has been upgraded significantly. The Toybox is essentially a demo, comprised of a large space where financial contributors to the game will be able to test the game out themselves ahead of time. While the Toybox was initially a single room, it has expanded to practically a whole sandbox level, complete with vertical platforms for players to scale and props to play around with.

Take me there. I want to go there.

So far, Yooka-Laylee seems to be fulfilling its promise of being a worthy successor to the long-revered Banjo-Kazooie games, bringing the classic platforming action to the new generation of video games in a colorful and charismatic way. Yooka-Laylee is definitely likely to be one of Kickstarter’s biggest gaming success stories.

Playtonic, unfortunately, couldn’t give a release date yet, but you can look forward to more details on Yooka-Laylee when Edge Magazine talks to Playtonic on May 26th, and when the team brings the game to E3 this year. You’ll eventually be able to get your hands on Yooka-Laylee sometime later this year for PC, Mac OSX, Linux, PlayStation 4, Wii U, and Xbox One.