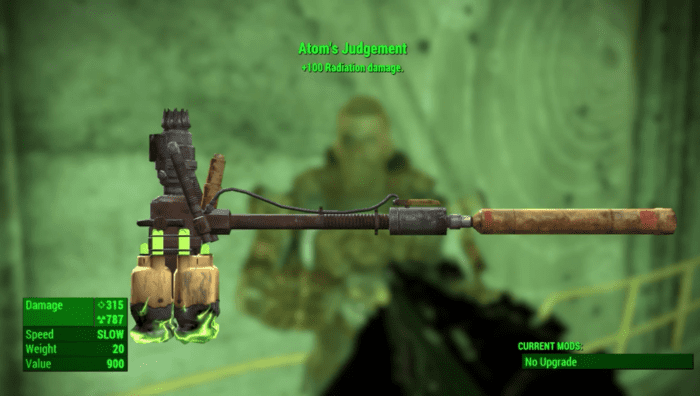 Melee weapons in Fallout 4 have been pretty impressive thus far, but Far Harbor kicks things up a notch with what is easily the coolest hammer in the entire game, or in any of Bethesda’s games. This hammer is called Atom’s Judgement, and it not only looks completely badass (with the irradiated goop oozing out of it), it also deals an insane amount of damage. Here’s how to get it.

You will need to complete the “The Heretic”, which is given to you by Grand Zealot Richter. This means you’ll need to be in good with the Child of Atom faction. You’ll be tasked with tracking down a member named Sister Gwyneth who has betrayed the group.

The mission is fairly straightforward as you first talk to Theil and then end up going on a sort of scavenger hunt that leads you right to Sister Gwyneth. When you finally find her, you have several options:

It doesn’t matter which choice you choose, as all will result in a completion granting you the Atom’s Judgement hammer. It comes with a legendary perk that does an extra 100 Points of radiation damage, and can be upgraded for more damage of varying types (including fire and stunning).

It’s extraordinarily slow, so it’s a bit unwieldy for anyone who isn’t prepared to get into a fist fight and take damage. But, in exchange for that loss of speed, you’ll be able to one-shot most enemies. It’s pretty funny to watch.

For more guides on Far Harbor, be sure to check out our Fallout 4 wiki.