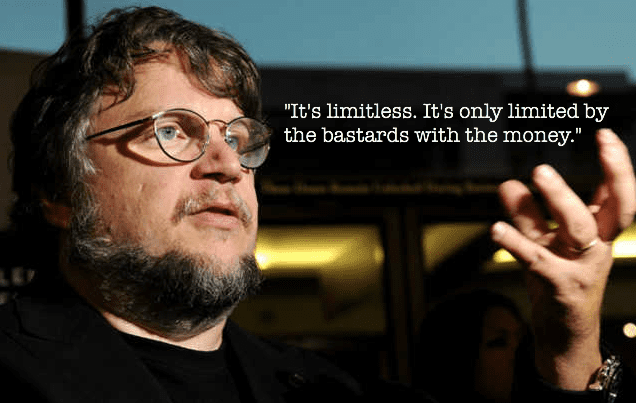 Today’s DICE panels ended with “A Conversation with Hideo Kojima and Guillermo del Toro,” where the two friends discussed friendship, games and future projects with mediator Geoff Keighley. Guillermo del Toro had some choice things to share, especially about the industry and creativity. Here’s our favorite 15 del Toro moments from the show.

On his friendship with Kojima

“When we met, we had watched the same shows as kids. And when we go to karaoke, we sing anime themes. I sing them in Spanish. He sings them in Japanese. We don’t understand shit, but once you have a few karaokes, it’s fantastic.”

“There’s a lot of good connections. He sings a lot but eats very little. I sing little and eat a lot, so it’s a perfect match.”

“We also are united by toys. Because he has toys that I want, very much. And we… it’s a friendship of convenience, because we give each other toys in exchange every visit. And when we’re in japan, you know, it’s good to see his collection and know that I have something to look forward to that I don’t have.”

On gaming compared to the film industry

“I think we all belong in industries where it’s a marriage of creation and financial, and in that, it’s very restrictive. They are very similarly restricted now, I think… I really think it’s a pity, but it’s a marriage that happens in every big industry. And what happens is the storytellers look ahead to see what they can discover, and the money people look back, thinking ‘Where are we going? I don’t know. That’s the safe route.'”

“It’s limitless. It’s only limited by the bastards with the money.”

“Studios in the gaming and the film industry are like dinosaurs coming to the edge of the cliff, and they try to stop and take the turn, but it’s so heavy… Creators help maneuver and change the direction. It’s a very good moment to be creative and independent.”

Geoff: “Part of what I’m sure you told him last year was to inspire him to keep going, right?”

“Yes, in so many words that cannot be quoted, that include the word ‘fuck’ and ‘yeah’ and so forth, and others.”

On making a game

“I’ll do whatever the fuck he [Kojima] wants.”

“I’m like the albatross. I go to THQ they fucking break. They go broke. I go with Kojima, you know what happened. Next game we’re gonna do, his fucking teeth are gonna fall out. We do something together, he’s going to be urinating and he’s gonna hear something drop in the toilet.”

“I’m 52 and many pounds over and the only thing I’m interested in are things that motivate me. I don’t care about what the monetary or fame or result are. It’s just having fun, and with this guy I always have fun, so whatever he says I’ll do. Other than that, screw that. ‘Cause I’ll go into the building and it’ll explode. Something terrible.”

“I think that there’s only one freedom you have and to say, ‘screw this, I’m not doing it.’ you know? Or, ‘I’m doing it’ and committing yourself. I mean, I think that other than that, you have the freedom to be ambitious, that’s extremely important.”

“If you are ambitious, and you don’t fully succeed, there are still going to be parts of your work that are pushing or that are beautiful like nothing before.”

“All the other freedoms are conditional. You can fight for them, they can give them to you, they can take them away, but the one to be ambitious that’s – you should never self censor yourself.”

“I think success – I’ve said it many times – is fucking up in your own terms. So, I’m very successful I guess.”