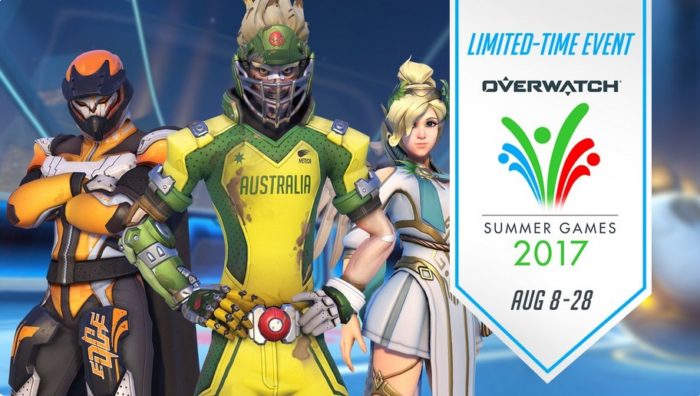 Last year the Summer Games event ran in August and featured skins centered around the Summer Olympic Games. This time around, you will be able to purchase those skins as well as pick up some new ones.

The 2016 Summer Games Seasonal event for Overwatch marked the very first event for the game, releasing a ton of new cosmetic items and a new brawl called Lucioball that was essentially Rocket League mixed with the capabilities of Lucio’s Sonic Amplifier with some tweaks here and there.

Well good news for those of you who might have jumped on the Overwatch train a little later, as the Summer Games event is making a return in 2017 running from Aug. 8 – 29 with tons of new and returning content.

In terms of cosmetics, both older skins and brand new ones centered around the Summer Games theme will be available for purchase via the in-game currency systems and through Summer Games loot-boxes. Back during the 2016 Summer Games, cosemtic items were not available for purchase through the credit system, leaving you chance for grabbing your favorite skin completely up to chance in opening loot boxes. However this year, all the returning items will be priced the same as normal cosmetic items instead of the usual increased prices that will be applicable to all the new skins, highlight intros, emotes, and more. So for example, Tracer’s legendary Sprinter skin from last year will be priced at 1000 coins, whereas the new skin for Mercy will be the normal event legendary price of 3000 coins. You can check out all the new skins here, and last year’s Summer Game’s skins here.

The 2017 Summer Games will run from Aug. 8 – 28, and will also see the return of popular brawl Lucioball.

You can check out all the skins below before the update goes live in a few hours. These skins are much more centered around what the Overwatch chacaters would look like if they took a trip to the beach, and less so if they were competatior in the Olympic games. For example we see Solider: 76 becoming a Grillmaster on the BBQ compete with an A-Salt rifle (clever Blizzard) and Widowmaker in a beach ready bikini. However there are some sporty ones too, like Reaper dressed up as a biker and Junkrat all geared up to play some cricket.

Make sure to stick to Twinfinite for all the latest news surrounding Overwatch and the latest Summer Games 2017 update in the weeks to come.