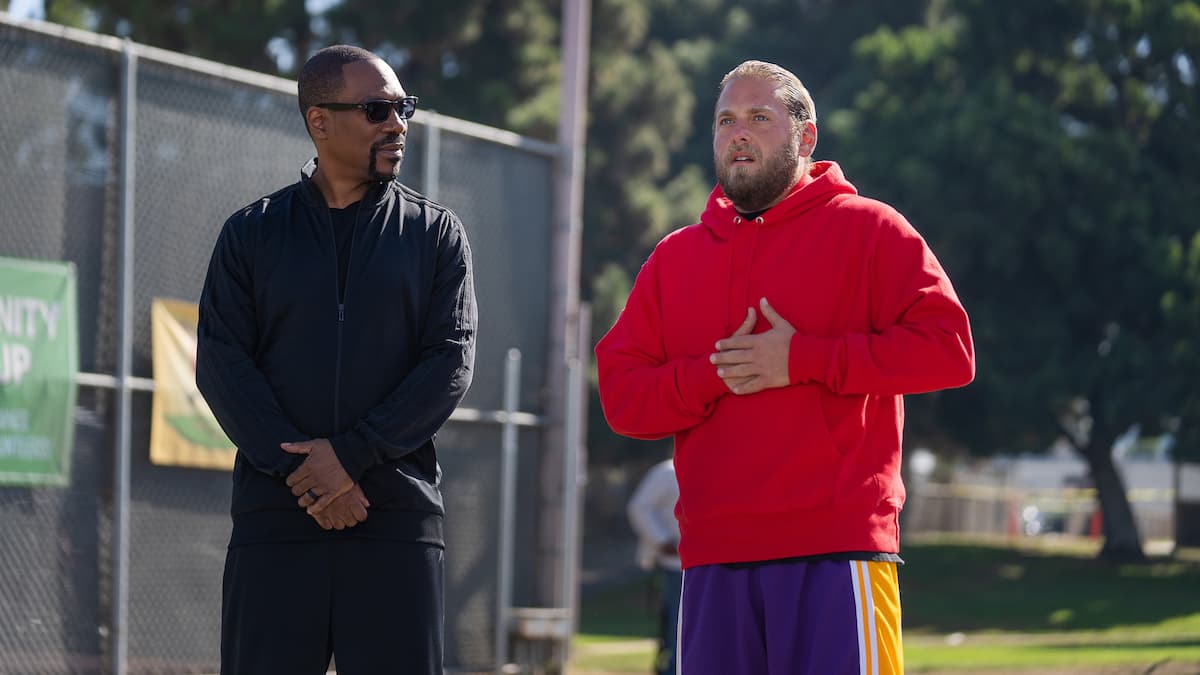 Despite having heavy subject matter such as generational trauma and biases, You People pleasantly paints itself with a comedy lens, making for a witty yet topical film full of laughs. However, is this movie, which is full of purposefully cringe moments, the right film for you? Let’s dive deeper into You People and whether or not this is a movie worthy of your time.

You People stars Jonah Hill and Lauren London as Ezra and Amira, a mixed-race couple seeking their parents’ approval, namely Ezra’s Jewish mother, Shelley, played by Julia Louis-Dreyfus, and Amira’s black father, Akbar, played by Eddie Murphy. Unfortunately for the millennial pair, their parents have differing views and beliefs, which cause major interference and disruption in the loving couple’s relationship.

After walking away from You People, there were certainly some significant positives that immediately stood out, namely the juxtaposition between the parents and how they treat their children’s relationship. It is clear from the beginning that both parents love their children but go about this relationship in all the wrong ways. Akbar and Shelley hold a ton of baggage; however, the film excellently portrays and emphasises that just because parents hold onto their baggage doesn’t mean they should force that onto their children.

One problem the film may run into is that it doesn’t hold your hand when immersing you in these cultures, with the film’s opening scenes in entirely Jewish and black places. You People will make references and jokes that really only people in those communities or those who are familiar with them will truly appreciate. Thankfully, as the film progresses and the two cultures start to collide, the film offers the audience an olive branch as Ezra, Akbar, Amira, and Shelley all explain their unique points of view to each other.

Another problem that the film may unfortunately run into is that this movie is very blunt about the positives and the negatives of all four lead characters’ points of view. While many people may find this refreshing, in today’s day and age, where a lot of people online seemingly aren’t willing to hear the other side of the argument, this could result in a polarized response to You People.

It is essential to come into the film with an open mind and listen to the arguments that the people in the movie make before jumping to conclusions on why the film gets something right or wrong. This is best illustrated by the podcast that Hill’s Ezra runs with his best friend and confidante, Mo. There are several scenes throughout the film of the podcast in which Ezra and Mo respectfully offer their opinions on different subject matters, leading to some of the best-executed scenes in the whole movie.

Nevertheless, while the film does bring up a lot of interesting topics, the film is also a comedy at its core, offering viewers plenty of biting jokes and purposefully cringe moments. One scene in particular that really resonated with me was a moment where two scenes get juxtaposed with each other, Akbar driving Ezra and Shelley driving Amira. Everybody can relate to the feeling of being trapped in an enclosed space while forced to have incredibly uncomfortable talks. This reliability factor makes the cringe seep through the screen in buckets with some hilarious dialogue, particularly when it comes to Ezra as he tries to relate to Akbar.

When it comes to the cast of You People, the movie undoubtedly has a plethora of comedy heavyweights from Hill to Murphy to Dreyfus, with brief appearances by others like Mike Epps, Rhea Perlman, and Anthony Anderson, amongst others. Yet the actual standout performance in the movie undoubtedly comes from comedian Sam Jay’s Mo, Ezra’s best friend and podcast partner. Mo is an incredible friend to Ezra and has plenty of fantastic comedic moments, namely when they talk on their podcast. However, there is one scene in particular on the podcast where she has a line comparing the relationship between white and black people to relationships that is one of the sharpest and most intriguing lines that I have ever heard. It is a scene that will, without a doubt, stick with me for the foreseeable future.

As for the other performances in the movie, Jonah Hill is doing his usual thing, and to be fair, he can be quite good at it, which he certainly is here. He has always been fantastic at portraying a quirky yet lovable guy who is excellent at giving one-liners when put into awkward situations, and the situations that he finds himself in here sure are cringe, especially when he is with Murphy’s Akbar. If you’ve seen any of Hill’s other movies, you’ll likely have a good idea of whether or not the comedy within this movie will work for you, especially seeing as how he co-wrote the script with the movie’s director, Kenya Barris.

Amira, performed by Lauren London, on the other hand, is certainly not as prolific as the other actors. Yet, she does a fantastic job at holding her own, especially when going toe-to-toe with a multitude of comedy legends. There is a ton of social and political baggage that is forced upon her character, like Akbar’s racial trauma and Shelley’s white guilt. London does an excellent job expressing her character’s opposing viewpoint while still coming across as likable and not “preachy.” It was a lot to ask of the actress, with her needing to balance both the funny and serious aspects of the movie with London proving that she was more than up to the task.

Julia Louis-Dreyfus is excellent as always, with the likable nature of the actress providing a significant assist to the character of Ezra’s mom. Shelley could’ve been an absolutely terrible person if portrayed by a lesser actress, especially with the comments that she makes to Amira. Still, the way Dreyfus delivers her lines makes her character seem well-intentioned in her problematic ways. Now don’t get me wrong, Dreyfus’ character still has plenty of flaws and should not be excused for her actions; however, it is worth crediting the actress for being able to create a much more nuanced and interesting character with the ways she delivers her lines.

The final cast member worth mentioning is, of course, the biggest star in the film, Eddie Murphy, who unfortunately is probably the most underwhelming character in the movie. That’s not to say that Murphy’s Akbar doesn’t have his moments, like the aforementioned car scene. Still, there isn’t anything about his performance that stands out and makes you immediately think that this was a character meant to be portrayed by the comedy legend. It’s surprising, obviously given that it’s Eddie Murphy playing the character, but Akbar lands a bit more on the bland side, with the script actually doing most of the character’s heavy lifting.

At the end of the day, You People is an enjoyable ride with a number of fun moments and characters. If you like previous Jonah Hill movies, or if you’re interested in seeing a film full of biting commentary hidden beneath some great comedic moments, then this is certainly the movie for you.

You People is currently playing in select theaters, with the film set to release on Netflix on Friday, Jan. 27, 2023.