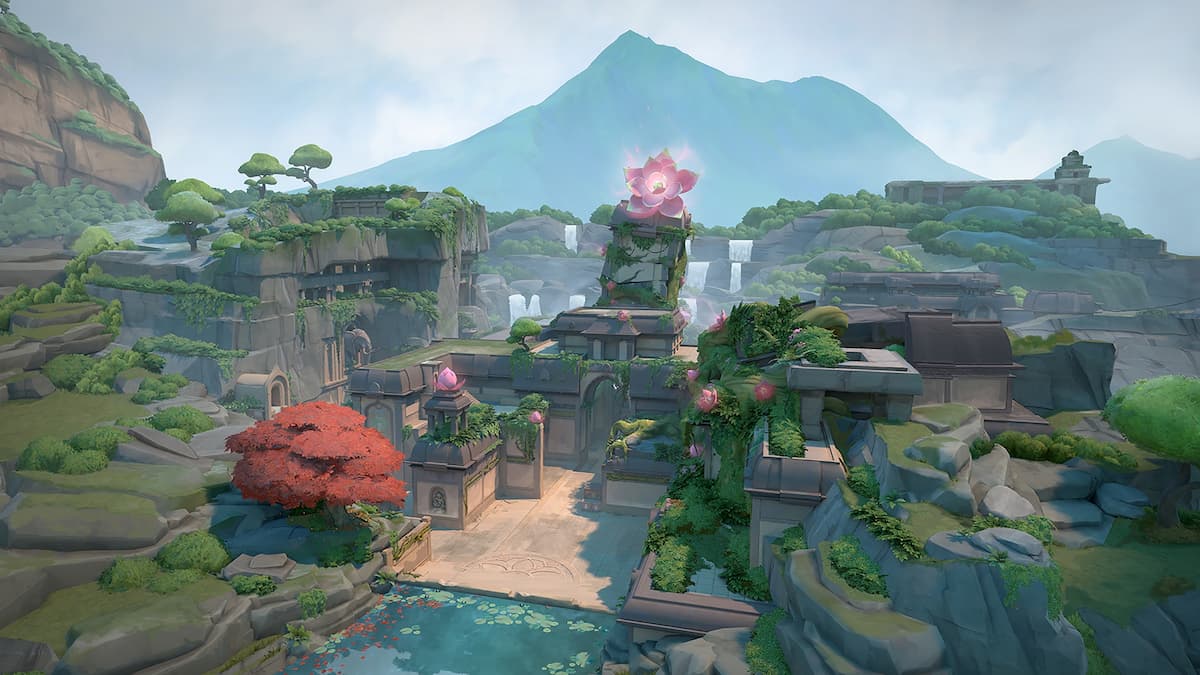 With Lotus now having joined Valorant’s competitive queue, it’s time to get serious about playing the right Agent for the map. Below you’ll find what I believe to be a fairly meta composition for Lotus right now, with my top picks for two initiators and one duelist, controller, and sentinel. I’ll provide an overview of why each of these Valorant Agents is best for Lotus but will also offer an alternative choice(s), so you have a second option to consider.

Before we dive in, you can check out my review impressions of the map so far, as well as a montage of me playing versus various content creators and pro players during Early Access. There’s footage of a few different Agents listed below featured in the video. Now, let’s dive into the 5 best Agents for Lotus.

Valorant’s meta has been dominated by initiators for a while now, but it isn’t often that Breach is the immediate go-to choice. On Lotus, though, he’s absolutely the strongest of the lot and should be included in any meta-comp.

Breach’s ability to stun and damage through walls is obviously his unique skill, which is something that’s incredibly valuable on Lotus for entry/defense of all three sites due to their shape and size. Just like on Haven, Breach is able to eliminate angles with utility, so they’re easier much easier to clear.

As a Breach, you’ll want to be taking charge of coordinating when your team pushes, but you should expect to play passively and out of harm’s way while providing that important utility dump. Stick close to your duelist and try to support them with stuns and flashes.

Alternate Agent Option: KAY/O is an Agent who finds value on basically any Valorant map, including Lotus. There aren’t so many spots to get value from the knife and flashes due to the shape of the main building, though.

The center point of Lotus might be its ancient stone building, but ironically, most of the walls seem to be wafer thin. With so many spots where it is possible to wallbang, Fade’s Haunt reveal gets extra value in the same way it does on Ascent. Of course, all of her info-gathering utility is great even when used in a more conventional way too; the Prowler is perfect for clearing sharp angles before site entries/retakes.

Elsewhere, Fade’s Tether ability is perfect for taking early map control when combined with damage-inflicting utility such as Raze’s Paint Shells or Breach’s Aftershock. The ultimate, too, is obviously good for the same reason it always is as a tool for entry/retake. Don’t forget that because enemies are deafened; it also makes for a great tool to fake and/or rotate to a different site from the one it was used on.

Alternate Agent Option: Sova is another intel-gathering initiator who can make great use of Lotus’ wallbang spots. Again, though, the shape of Lotus’ building, with its low ceiling and sharp angles, makes darts less effective than on other maps.

Lotus is a map that rewards fast map control on both attack and defense, and there’s nobody faster than Neon on Valorant’s Agent roster. Beyond just her ability to sprint, though, the stun and wall are massively useful for taking early control of areas like A Lobby/Rubble. On Attack, Neon can sprint over to rubble with a wall and take space, while on defense, she can claim the same area from the opposite side.

Neon’s speed also allows her to rotate very quickly, which is valuable on a three-site map like Lotus where rotate times are generally slower. Not to mention, that speed can also be used to fast flank on either attack or defense for any enemy teams foolish enough not to be watching behind.

Alternate Agent Option: Raze is also great on Lotus. Her Paint Shells work great in combination with Fade and Breach, while her Satchels can be used to take space quickly.

Astra works great on Lotus for the same reason she’s so effective on Pearl, Haven, and Ascent: her utility has global coverage, and because each of the spike sites has narrow choke points her Gravity Well can be used to cause big problems. You can also use the Gravity Well to take map control, too, either to vulnerable enemies before gunfights or to suck them toward damage-inflicting utility as part of a combination.

The same could be said of the smokes, too, which are big enough to seal off every choke point in the game and can be used no matter where she’s located. That means Astra can lurk and/or play passively while providing plenty of value for her team.

Alternate Agent Option: Omen is a solid option on Lotus due to the size and range of his smokes. The blind is also decent for pushing sites.

Traditional sentinels are firmly back in the meta after Chamber’s big nerf, and Killjoy has arguably emerged as the strongest now that her Lockdown ultimate can’t be destroyed by a Breach Aftershock. But for reasons even beyond that, she’s absolutely excellent on Lotus; the Lockdown is insanely powerful for retakes/site hits, and all of her trap utility works well to shore up the flanks or defending choke points.

Alternate Agent Option: Cypher has potential on Lotus, given that lurking/flank watching is a big part of the ebb and flow of most rounds. There are lots of options for interesting trips and cameras, especially on C site.

That does it for Twinfinite’s 5 best Agents on the new Valorant map Lotus. Stick around for more coverage of the game, and check out some of the related content listed below.