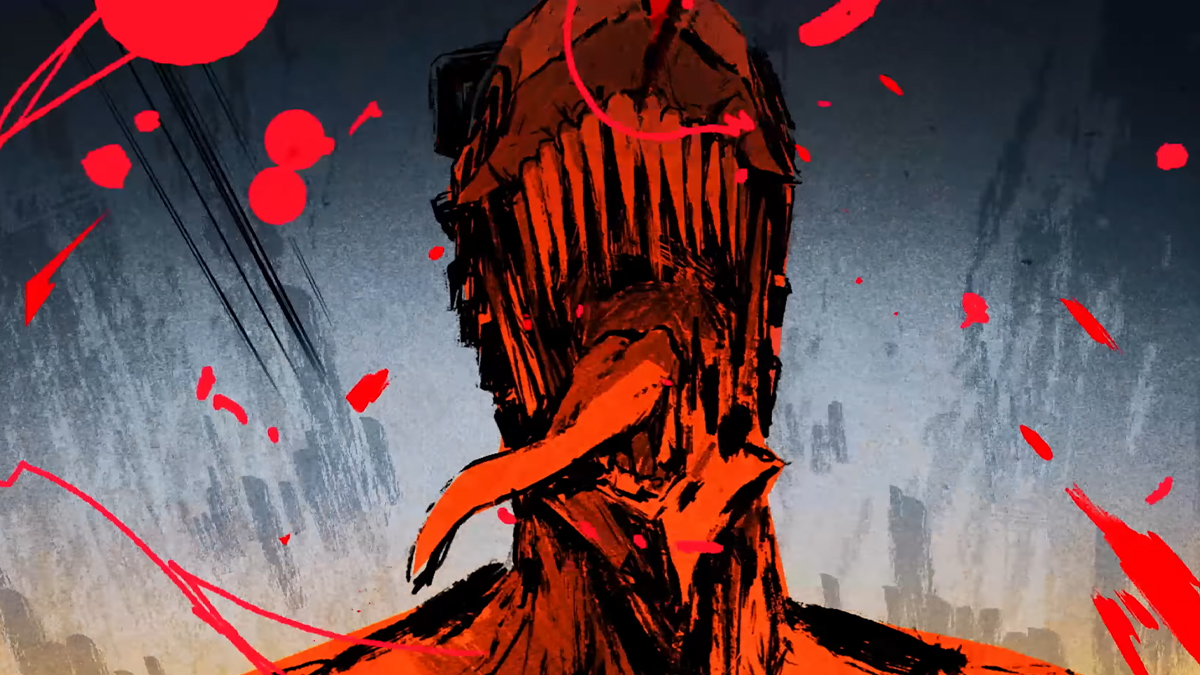 Season 1 of Chainsaw Man might be over, but that isn’t stopping us from ritualistically listening to the phenomenal musical accompaniment that bookends each episode. The ending songs – and their visual companions – have taken on a fandom of their own, merging talented Japanese musicians with striking animation that sends each episode off with a bang and lingers in our head long after our streaming service rudely asks, “are you still watching?”

Ranking the songs is a bittersweet endeavor, as each one bears its own unique vibe and connection to the episode it caps. For this list, we’re checking a few boxes to sort the order, putting an emphasis on the visuals and music that serve their respective episode while also capturing the vibe of Chainsaw Man as a whole.

So, let’s tear into this list and try our best to avoid a head-banging-induced migraine along the way.

Rendezvous by Kanaria comes at the heels of the climax of the Eternity Devil arc, where Special Division 4 is trapped in a hotel by the time-manipulating devil itself. Appropriately, the visuals show our heroes trekking across endless, M. C. Escher-like staircases clad in drab greys and whites, mirroring the endless loop in which they are trapped.

The song itself is poppy and fun, and its lyrics effectively echo the horrifying situation the hunters find themselves in, but it lacks a darker punch that would even better suit the tone of the episode. The cerebral visuals likewise work well but again stagnate as endless staircases dominate much of the screen time, interspersed with a very tepid attempt to build the unrequited love relationship between Aki and Himeno.

Dogland by People 1 is a decently groovy song on its own and gets a marginal boost from the unique visuals that accompany it, which blend heavily edited real-life footage with animated scenes in a black and white embossed montage of dark alleyways depicting the seedy reality of a “dog” like Denji surviving in a dangerous world on primal instinct alone.

Ultimately, the song is just not as strong as the other entries, and the themes/visuals that go along with it have little to nothing to do with the episode itself. In the wake of Denji and Power’s new brutal training regiment, Denji being depicted alongside dogs doesn’t make much sense and actually works better for a future plotline between him and Makima. The ending winds up feeling out of place and a wasted opportunity for some savage training montages between Kishibe and his new recruits.

Vaundy’s Chainsaw Blood kicks off the series with a relatively strong entry in the annals of Chainsaw Man ending songs. It has an edge and a bite that appropriately sets the tone for the series, with a crunchy guitar backing punchy vocals that befit the violence we’ve seen take place in Episode 1.

While the song is good, it doesn’t have the same “sticking” effect as some of the others on the list. Likewise, the visuals that play alongside it are chiefly scenes from the episode itself, breaking no new ground with unique animations of its own. It is a good start to the tradition of iconic endings, and as the trailblazer, it deserves love for getting things moving in the right direction.

Violence by Queen Bee has undeniably stunning visuals, throwing our characters into a matrix of glass and skyscrapers with crisp blacks and whites and vibrant animation that make any paused moment worthy of a high-definition screensaver. The title is also fitting, given the zombie massacring the episode centered around and the introduction of the Violence Fiend himself.

The ending suffers from another song that does not live up to the visuals. Violence is catchy but not otherworldly memorable. Likewise, while the animations are clean, they do little in the way of convincingly intertwining themselves with the episode itself, depicting our heroes (for the most part) emptily interacting with the cold visuals around them and fostering a sense of disconnect that is absent from the very team-oriented Episode 11.

8. In the Backroom by Syudou (Episode 5)

On the heels of Episode 4’s chaotic ending (one spot below), Syudou’s In The Back Room ups the ante of insanity with its psychedelic visuals befitting the Eternity Devil arc kicked off in Episode 5. The song itself is as catchy as any you will hear, flying in the face of logic and prompting viewers to giddily Karaoke along despite the ominous situation the hunters find themselves in at Hotel Morin.

The only potential flaw in the ending is its trippy visuals that, at times, seem totally random and unconnected to the episode itself and the series as a whole. That said, the randomness in and of itself marries perfectly with Chainsaw Man’s irreverent, unpredictable vibes, contrasting beautifully with Syudou’s sing-along accompaniment.

Episode 4 featured a lot of everyone’s favorite, unhinged, blood-lusting Fiend, Power, and closed with a hilarious groping scene that made us equal parts amused and uncomfortable. It is only fitting that the ending song, Tablet by TOOBOE, be just as chaotic.

The song erupts into your ears with heady blast beats over images of a deranged-looking Power screaming, then rolls into its plucky, upbeat rhythm to our blood-loving maniac finger dancing around her signature horns. The entire ending is a frenetic whirlwind suited for Power and bolstered by vibrant animation and colors that hammer home her psychotic-childlike duality.

ZutoMayo’s Time Left comes at you hard with a funky bass line and groovy off-beat drums and keeps your foot tapping and head bobbing through to the “Up Next” prompt. The sophomoric entry into Chainsaw Man endings hits its stride with uniquely styled animations of our protagonists staving off their boredom in their own ways.

The visuals center around the core trio, Power, Denji, and Aki, and make us feel like we’re embarking on a wild and unknown adventure with the three as each exit their sedentary states and enter the city. Denji very literally plummets head over heels from high above and into his new partnership with the Devil Hunters, priming viewers for the exciting adventures that lay ahead and grooving all the while.

Fight Song by Eve is the perfect, levitous, uplifting outro to a Season 1 wrought with violence, sorrow, and ultimately triumph. With Katana Man vanquished and justice served, the rag-tag trio enjoys some well-earned peace as they wander the city to Eve’s uplifting lyrics and beats.

The visuals are all in the same style as the anime itself and start with rehashing previously shown scenes and work their way into new ones of the three living their quirky modern-family existence alongside one another. It works not only as a feel-good send-off to our favorite Devil Hunters but as a building block for Aki’s growing affection for the family that is forced upon him (an important plotline explored later down the road).

The entire sequence feels like an extension of the episode itself and segues perfectly into the post-credit scene in which we hear the voice of an integral Season 2 character disrupt the cheery vibes with an ominous riddle about mice.

In the wake of the decimation of Special Division 4 at the hands of Katana Man and Akane, it is only appropriate that the outro convey a sense of loss and uncertainty. Aimer’s Deep Down executes this tone flawlessly with breathy, heartfelt vocals and emotive strings that makes us feel like our heroes are at a point of total despair and hopelessness.

The visuals are likewise tender, depicting Himeno solemnly disappearing piece-by-piece to the Ghost Devil and falling into a black abyss of blood and organs, snuffed out like the cigarette that burns and falls in the closing images. It is truly a worthy send-off to the one-eyed Devil Huntress, both in visuals and sounds.

Ironically, the episode where very little action happens yields one of the best ending sequences. After a night of excess and debauchery, Chu, Tayousei by ano rolls us into the credits, replete with an amazing retro aesthetic and a 90s video game recreation of the episode’s events unfolding on a tube TV.

Denji’s pursuit of women continues to be his top priority, and as a result, the ladies of Chainsaw Man are front and center in the romance JRPG-esque recreation of his battling lust between Power, Himeno, and Makima. Yes, there is a scene of Himeno puking a rainbow into Denji’s mouth, but the unique visuals and the flowy musical accompaniment by ano outweigh the moment and make the episode’s ending one of the most stylish and memorable.

Episode 3’s epic battle between Denji and the Bat Devil could only be followed by a violent headbanger suited for the Devil that Devils Fear Most. Hawatari Niku Centi by Maximum the Hormone takes up the challenge and executes it to perfection. The chunky bassline gives way to a cacophony of heavy-metal stylings fit only for a man with chainsaws for limbs.

Given that the episode features Denji’s first battle and a display of his capacity for unhinged violence and mayhem, the frenetic hard-rock anthem is a perfect ending, heightened by the trippy, hyper-manic visuals of our bladed protagonist slicing through enemies with ruthless aggression. The sounds and the sights are exactly what we think of when we close our eyes and picture Chainsaw Man.

Edging out all the stiff competition is Episode 8’s ending, helmed by First Death by TK from Ling Tosite Sigure. The closing sequence hits every single mark and then some. The song itself is, for lack of a better phrase, an absolute banger, thanks to a crispy drum beat and piercing guitar riffs that embody the weight and violence that is Chainsaw Man.

The visuals are understated compared to others on this list, but to great effect. The unique scenes not featured in the episode feel as though we’re watching a high-quality stand-alone music video for the series, extending the unrequited love plotline between Himeno and Aki in a dream-like sequence that acts as an ode to their complicated romance and a moment of serenity before the fallout in Episode 9.

First Death is by far the strongest song among the others on the list, and it matches so perfectly with the violent events that take place in the episode that the ending stands not only as an impressive, compelling work of art on its own but the best closing sequence of the series.