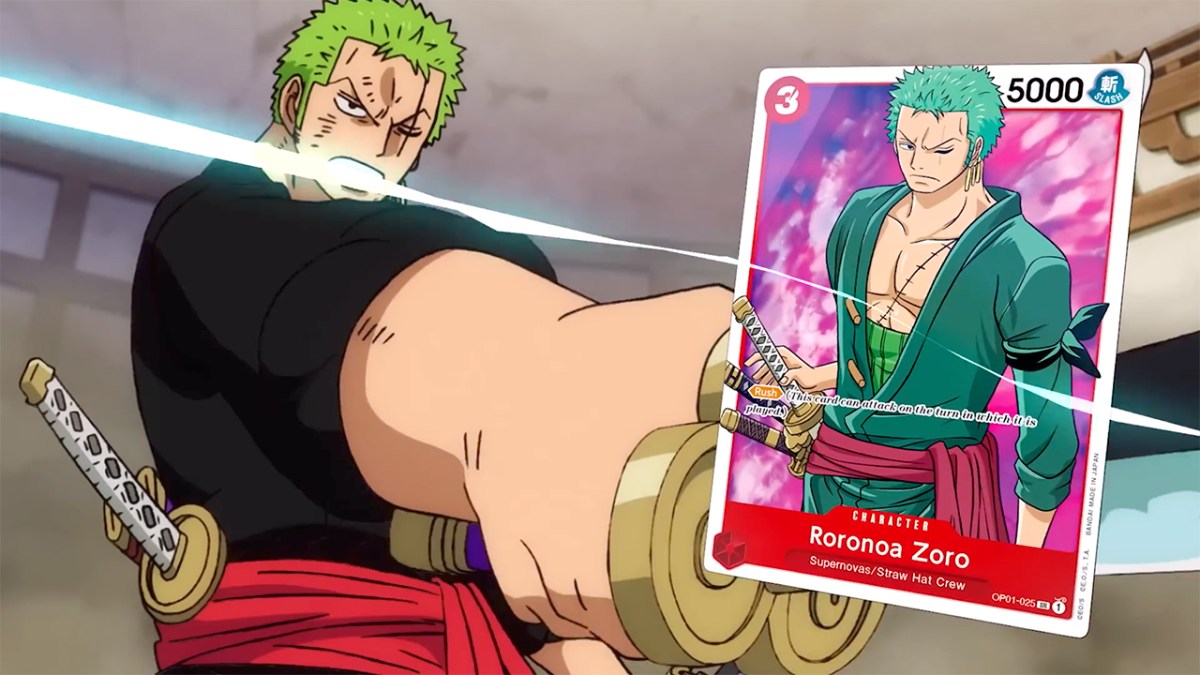 With the One Piece TCG out and in full swing, a base meta has been established where powerful deck types are standing out. If you’re looking to get into the competitive scene of local and nationwide tournaments, you’ll need to know what the current most popular decks are so you can either play them or prepare to play against them. Currently, the number one most popular deck is fast and aggressive, and this guide will teach you how to build & play the Zoro red deck in One Piece TCG.

Zoro is a strong, aggressive leader since his ability allows him to attach 1 Don!! which enables his power of giving all of your characters +1000 power. That’s a huge boost considering you can have up to 5 characters in play on your side. This also means that your Zoro leader should always be attacking at a minimum of 6000 power, demanding your opponent to use more cards from their hand if they want to counter and defend successfully.

The Decklist For Zoro Red

All of these listed cards are available in the current North American market from the first booster set, Romance Dawn. The main strength of this deck lies with character cards that possess the Rush keyword ability. In this game, characters cannot attack the turn they are played. However, the Rush ability allows a character to break this rule.

The primary attackers in your deck are:

Sai doesn’t have Rush, but it’s also important to have a cost-efficient attacker with no skills that can hit the 5000 Power threshold that can chip the enemy leader’s life away, thanks to Zoro’s ability.

If you only play character cards and attack nonstop, chances are you might run out of steam if your opponent can block and KO your characters faster. That’s why this deck also has ways to draw more cards to keep up the momentum. For this role there is:

Nami gets you another Straw Hat Crew character of your choice from the top 5 cards of your deck, while Uta lets you bring back a character that costs three or less from your Trash to be played again. It’s important to have a backup plan against decks that have a lot of ways to KO your characters. You’ll need to build up your attackers right away to make sure you always have threats on the table.

Even though this deck is all about offense, it’s crucial to have some defensive options. This allows you to race against other aggressive decks while conserving your leader’s life as the game gets closer to the end.

Otama and Law will lower the power of opposing enemy characters, making it easy for your cards to attack and KO them. Meanwhile, Chopper is a 1-cost blocker, and every time Nico Robin attacks; she can KO enemies with 3000 power or less. This helps you get rid of blockers and efficient attackers from the enemy side.

Usopp is a flexible character that you can play if you know your opponent plays a lot of event cards since Usopp lets you draw a card once per turn when an opponent plays an event card. And you can always use Usopp as a +2000 counter which is currently the highest power a character card can give while countering.

Finally, there are eight solid event cards you need to help with both offense and defensive flexibility.

Gum-Gum Jet Pistol gives you a great way to counter an attack while knocking out another potential attacker or blocker. On the other hand, Diable Jambe makes your leader or one of your characters unblockable, but with four in your deck, if it gets triggered from your life, you get to freely KO an enemy— either a pesky attacker or a blocker preventing you from winning on your next turn.

When playing this Zoro deck, you’ll want to attack in waves and then hold back once you have at least 4 solid attackers to save an extra slot for a possible blocker or to rebuild if the opponent manages to KO all your characters in one fell swoop. If you’re putting together a defensive deck, you’ll need to get plenty of practice against this deck to make sure you understand the flow of the game and how to best survive against Zoro’s onslaught.

Red is poised at being the color with the most attack aggression, and this deck proves it. If you’re the type of player who enjoys mustering up a team of characters and sending in a constant barrage of attacks to overwhelm your opponent as fast as possible, then this is the deck for you. This Zoro deck showcases the fundamental rush attacking strategy that’s not exactly a new concept for a TCG, but it is an action-packed and fun one at that.

Now that you understand how to build & play the Zoro red deck in One Piece TCG, you can also check out our One Piece TCG beginner tips guide and much more related content right down below.