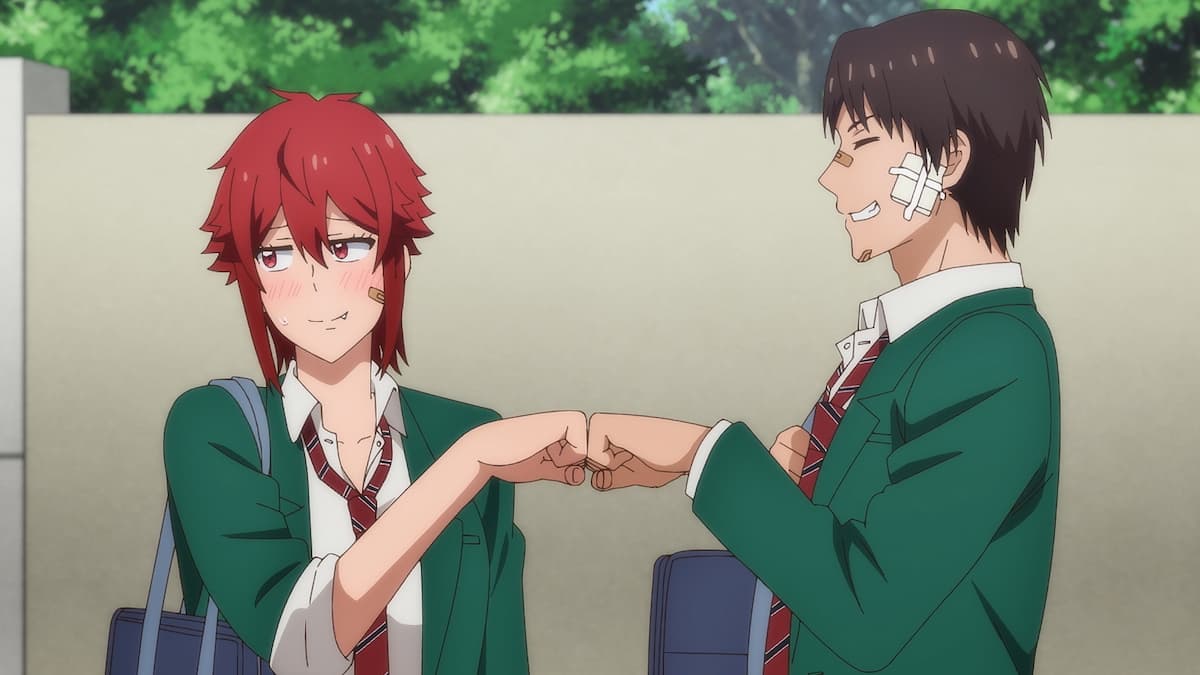 Imagine, for a moment, that you were about to confess your love to your best friend. Since childhood, the two of you have been close, and after going your separate ways in junior high, you’re now reunited as high schoolers.

Over time, you began to view him differently. Affectionately. You know your emotions are true, and so, you take your heart in your hand and tell him exactly how you feel. There’s a tense silence, as you await his response. A grin slowly crosses his face, which turns into a smirk. Then, it happens.

“I love you too, best bud!” he chuckles, throwing his arm over your shoulder and banishing you to the friend zone. Thanks, bruh, you just obliterated the mood with your cavalier attitude and made everything super awkward. Appreciate you.

This is the situation Tomo Aizawa finds herself in, in this month’s anime premiere of Tomo-chan is a Girl! Based on the four-panel manga by Fumita Yanagida, this lighthearted story focuses on the tomboyish Tomo and her newfound infatuation for her close pal, Junichiro.

Your faithful otaku friends at Twinfinite got to take a look at the first two episodes, and needless to say, we’re pretty excited to see how this rom-com unfolds. Brought to you courtesy of Lay-Duce, the studio behind Classroom☆Crisis and Yuru Yuri,, Tomo-chan promises to deliver the kind of uplifting slice-of-life shenanigans that’ll get you set for the year ahead.

Just like the manga it was based on, the Tomo-chan anime jumps right into the thick of things, setting the scene with Tomo’s ill-fated confession. The pair had been up to mischief since they were little, and as such, Jun has never considered her to be anything more than “one of the guys”. Tomo speaks brashly and doesn’t know the first thing about what’s expected of a conventional woman, typically settling arguments with a knockout punch.

Lots of people can see her effortless beauty, but she simply cannot, and worse still, neither can Jun.

Surrounding them are a series of classmates who will either help or hinder their path toward romance, ranging from the stone-faced Misuzu and her nefarious plans to the well-intending Tanabe and his stunning lack of scruples.

Even if you’re unfamiliar with the source manga, you can anticipate that the narrative will revolve heavily around a series of misunderstandings and a circuitous map of love interests, akin to Uzaki-chan Wants to Hang Out! or the oft-overlooked Gamers!

These lost-in-translation moments between oblivious conversationalists make up the majority of the humor in the first episode, and there was a moment where Jun described Tomo as being “good at using her feet” that made me just about spit out my drink.

Of course, the mileage behind this kind of anime is largely dependent on the strength of its main cast, and it really looks like we’re in good hands. Tomo is a top-notch MC, equal parts dim-witted and affable. She’s capable of fending off threats with a mere glare, or happy to become friends at the drop of a hat.

Amusingly, she is just as unaware of the burgeoning signals being sent her way from a potential suitor in karate club captain Misaki. As an anime-only viewer myself, I can anticipate this relationship throwing another wrench into the works sooner or later, thanks to this unassuming bishonen.

Rie Takahashi, who plays Tomo in the Japanese version, sounds as if she is having an absolute blast in the recording studio, delivering the protagonist’s husky voice with full conviction. Takahashi recently came off a turn as Aileen Lauren Dautriche in I’m the Villainess, So I’m Taming the Final Boss, showcasing a dynamic range between the measured Aileen and the frenetic energy of Tomo.

The anime’s highlight so far, however, belongs to episode two’s introduction of Carol Olston. Without giving away too much, her vacant, deadpan demeanor adds a fantastic balance to the friendship group of Tomo and Misuzu, and her fickle personality instantly won me over.

As happy-go-lucky as the tone has been, signs of some heartrending turmoil are already beginning to take shape. Even in the first two episodes, there are clear signs of character progression developing within Jun. Does he perhaps know more than he’s letting on, and he’s unable to express his own sentiments? Though we’re not likely to come to a conclusive juncture early on — the season is slated for 13 episodes — the pieces are falling into place.

The anime slate for fall 2022 was absolutely relentless, delivering high-octane thrills at a breakneck pace. To be able to ease into winter 2023 with something as accessible as Tomo-chan is a cozy kind of vibe, and ought to prove a solid change of pace from the shonen/seinin debuts of Trigun Stampede and Vinland Saga Season 2.

The first episode of Tomo-chan is a Girl! has now dropped on Crunchyroll, starring Rie Takahashi, Kaito Ishikawa, and Rina Hidaka. The English dub, airing alongside the subtitled Japanese version, features the talents of Lexi Nieto, Ricco Fajardo, and Jad Saxton. Anyone keen to learn more can head over to the official Twitter account (which is followed by John Cena, in case you were interested).

Ahh, anime. I can’t help but gush about it in these halcyon years because there’s so much to be excited about. If you haven’t already, check out our exhaustive list of what you can look forward to this year, or revel in Twinfinite’s top 10 anime of 2022.