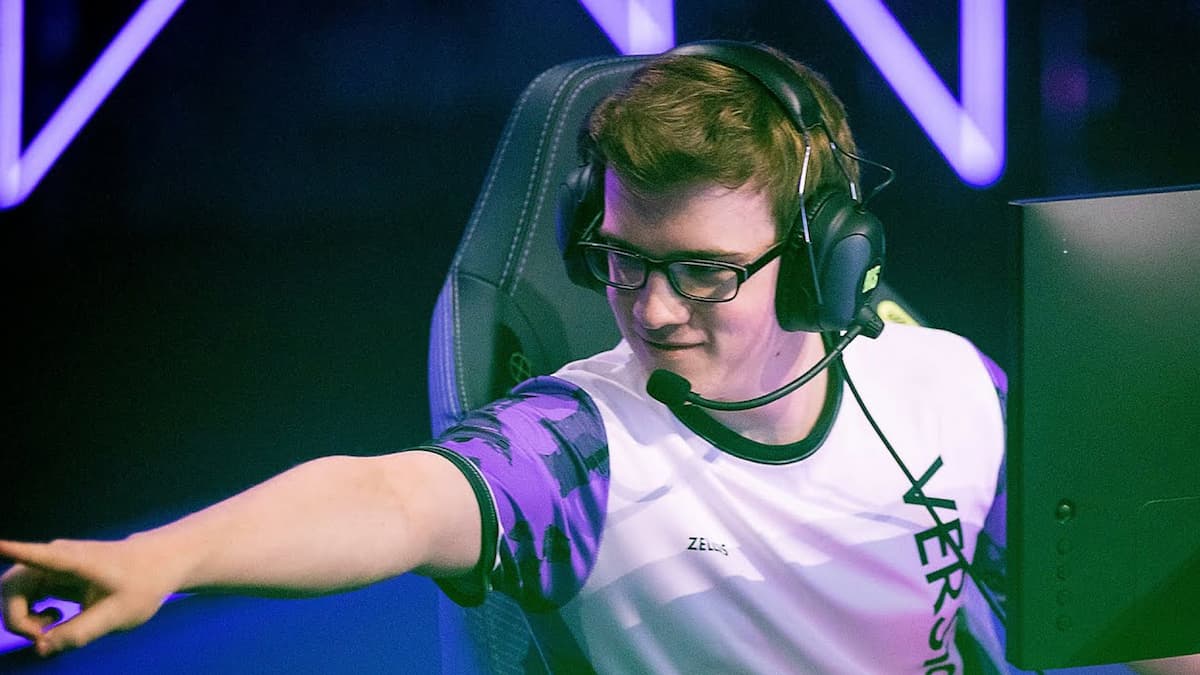 2022 has been a big year for Jordan ‘Zellsis’ Montemurro, but it definitely didn’t start anywhere near as brightly as it ended for the young American Valorant star. After Version1 failed to return to the highs it achieved during the early stages of 2021 at Masters Reykjavik, it almost looked for a hot minute as though Zellsis might have missed his shot at the apex of the scene. But form is only temporary, and class is permanent, as they say…

When Sentinels needed players to step up for its last-ditch LCQ effort, Zellsis stepped up and delivered not only a stellar performance in the server but quickly emerged as an entertaining personality on stream. He’s since found his way onto one of the most potent-looking franchised orgs ahead of VCT 2023 in Cloud9 Blue, and last weekend was the team’s LAN debut at Red Bull Homeground. Of course, the team eventually went down to 100 Thieves in the grand final but would have been happy with a solid second-place finish. Before it all kicked off, though, Twinfinite sat down with Zellsis to chat. Here’s how he had to say:

Twinfinite senior editor Alex Gibson: Hi Zellsis, good to talk to you. The last 12 months have been a bit of a roller coaster for you, from V1’s highs and lows to blowing up on Sentinels as a personality and now to a super roster in Cloud9 Blue. Can you talk a little about what the experience has been like and how happy you were to land a spot on a franchised team for 2023?

Zellsis: Yeah, I mean, we ended the year as V1, not in the way we would have hoped. Later in the year, Sentinels explained that they needed one or two players for LCQ, and I was talking to ‘Raukus’ a little bit before that, and I think he really liked me as a player, and knowing me, he knew I would mesh well –personality wise, vibes wise, energy wise–, and I think he wanted to bring that into the team for LCQ to boost the morale. So that’s how I got to Sentinels.

But yeah, blowing up on them, when I get asked about this sort of stuff, I always say I’m just doing me, playing video games, being an idiot — having ups and downs! But I will always be grateful to Sentinels because they gave me a platform to showcase not only my in-game skills but my personality, so yeah, it was super dope of them to do that and bring me on and allow me to flourish in that environment.

Not many people actually know that I was kind of only on loan to Sentinels — that’s a mix-up people forget, that I had to go back to V1. As you said, there was no franchised team — I had a couple of offers, but obviously, I chose C9 Blue, and hopefully, it all works, and we pull some Ws this year.

What’s it been like working with ‘Yay,’ and how do you kinda compare his style and his performance as a teammate in comparison to someone like ‘Tenz?‘

Zellsis: They’re both similar; the mechanics and the skill level are all there. I think ‘Tenz’ is a little bit wilder in his playstyle, a little bit rawer. I think ‘Yay’ kind of sits in a system almost — his system, whereas Tenz freeballs.

But their overall skill level, I think they are very alike. I think their aim is the same, but playing with Yay now, he’s very in tune with the game. To be fair, ‘Tenz’ was, too; both are in the server a lot, and they both go over their own plays. But being reunited with yay now as arguably the best player in the world is a sick feeling.

Alex: Sentinels was obviously a wild throw-together team for that last-ditch LCQ effort, which was crazy exciting but came together so quickly in a storm. How different is the environment at Cloud9 and do you feel confident looking at other teams in the region that you guys are going to be on point next year?

Zellsis: I don’t think the environment is that different. On Sen, the team only had a month/month and a half to bring in two new people who you had to rebuild the team around. Two people is a lot — it may not seem so, but two is a lot.

Also, bringing in ‘shroud’ who is mechanically skilled but doesn’t have a ton of Valorant experience under his belt. So, I think on Sen we did the best we could with that. If we had more time, we maybe could have done more there; I mean, all our games were super close and super entertaining, and nobody can take that away from us.

But on Cloud9, it’s almost the same thing. We’re grinding, we’re going over VODs, and we’re making sure we are working on fundamentals and not getting lazy. In Valorant, you can’t throw away easy rounds in Valorant because there are only so many rounds — it’s a snowball, momentum-based game. So yeah, we’re grinding and working hard.

Alex: So looking ahead to the tournament, who do you think looks dangerous, and how much do you guys know about the European teams you’ll be playing against?

Zellsis: I don’t actually know much! Liquid obviously has two subs, so that will be interesting to see and play against, but I was hoping they would have their full roster. I know Vitality has ‘bonecold’ and ‘Twisten,’ which I recently learned, and I really like ‘Twisten’ because I watched a lot of his demos on BIG. And then, obviously, the big team that for me I am worried about is 100T. Of course, you also have people on Heretics and Sayf on Liquid — there are some big players who have made a name for themselves in recent months.

Alex: Is Red Bull Homeground a kinda practice tournament for you guys or are you coming into this with full preparation to take home the W?

Zellsis: Well, you always want to win. But at the same time, I am looking at it as if we lose it’s fine, we go back to the drawing board, fix mistakes, and get ready for next year. No team should be looking at it as though losing here is something to get your head or your morale down. That shouldn’t be the main key point, but yeah, winning is the goal.

Alex: I know you’ll all be focused on playing with the current patch, but you will obviously know about the big changes that have come to Valorant and particularly to Chamber. How do you see those impacting Cloud9 in particular, given that yay is probably the world’s best Chamber? I have heard other analysts claim that Cloud9 was a big loser in this patch; what do you say to that?

Zellsis: I think the people who say Cloud9 are the big losers of this new patch don’t really know who is on this team and who we are. If you know, yay, you’ll know that he was doing the same thing even before Chamber but on lesser teams.

Obviously, he got poached to ENVY, then Optic, and now Cloud9. He was still frying on Jett; he was good on Sage; he was good on Breach. He played a lot of roles before he was known as the Chamber. So for the people who say we’re losers to this patch, well, we might, but we have a very diverse team — four of us on this team can play a lot of different roles and a lot of different Agents.

Red Bull Homeground took place last weekend. The tournament was held in Manchester, UK, and featured several teams partnered with Riot Games for next year’s Valorant Champions Tour league. There is a prize pool of $100,000 for the eight invited teams to fight over. Team Liquid was the defending champion, but it was 100 Thieves that won this year in a grand final versus Cloud9 Blue.