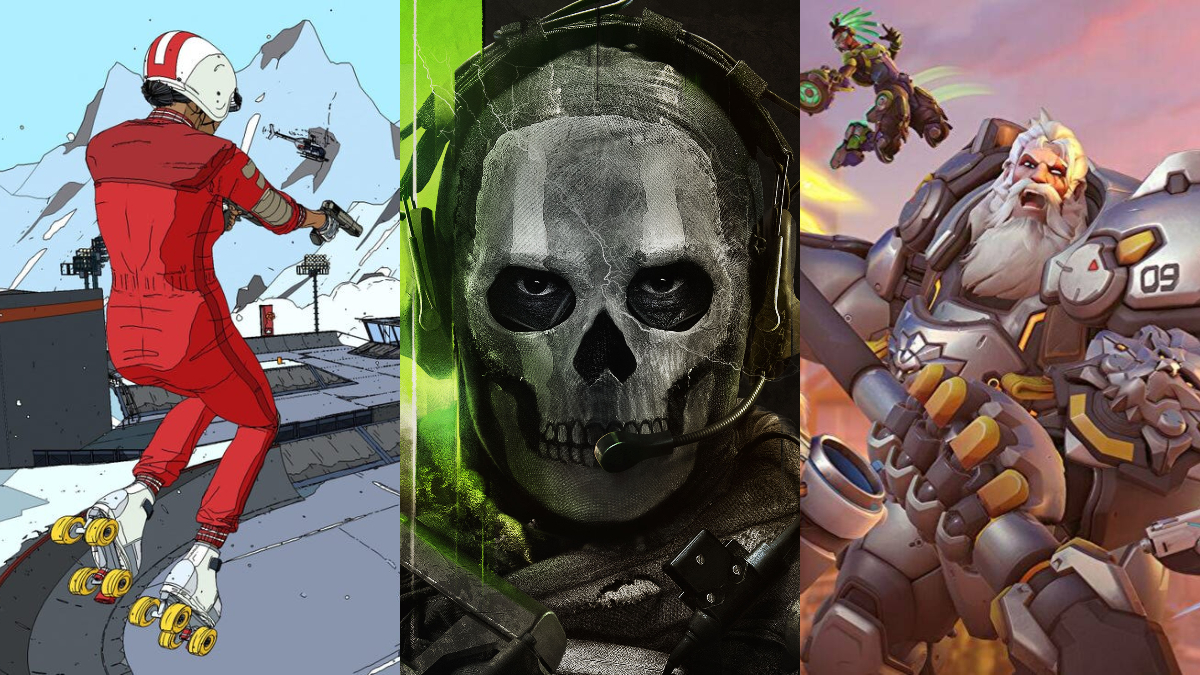 As the year draws to a close it’s time to reflect on the games we enjoyed playing the most here at Twinfinite. As is custom, we separate each genre and then rank our favorites based on the number of votes from our staff members. Here we’re running through what we consider the best FPS and shooter games of 2022 and crowning one king of the hill.

Contributing Writer Jake Su: Rollerdrome stands out not just for its amazing visuals but also for the fact that it has managed to combine two totally polar opposite genres into one superb experience. Developer Roll7 has certainly created something uniquely its own with Rollerdrome, crafting a high-score chase that challenges players to master skating and shooting as an art form in a variety of interesting arenas, as well as against a colorful rogue gallery of specialized opposition.

From a design perspective, shooting in Rollerdrome is far from complicated, with much of the heavy lifting being done by the auto lock-on. As long as you are within range of an enemy, they are getting murdered. However, it is the delicate ballet of well-timed shooting, pulling off tricks, replenishing ammo, and stringing everything together that makes it a satisfying shooter with payoffs like no other.

By constantly keeping on the move and juggling between the four weapons at your disposal, charting the most efficient course through each level’s enemies, and learning when to pop their heads wide open become an exercise in seeking perfection, all while secrets and collectibles are there for the taking. Even though you are never truly aiming with your weapons, the fact is that this kind of shooting gallery may be the best one yet, and we can all thank the amazing folks at Roll7 for the invention of this new blood sport.

Contributing Writer Cameron Waldrop: Tiny Tina’s Wonderlands is what all spin-offs should be. Not only does it still deliver the same Borderlands FPS experience, but it still offers something unique. Sure, the Dungeons & Dragons setting was already done previously, but that was just Borderlands 2 with a fantasy paint job. This time around, the idea was firmly planted as its own thing. Not only is the game given a humorous tabletop overworld, but it’s where a solid portion of the game takes place.

Tiny Tina’s Wonderland breaks up the interconnected map seen in the mainline titles to instead make each area its own thing connected only to the Overworld. This absolutely makes every foray into first-person sections feel appropriately like dungeon delving, and it’s awesome. There are even random gunfights to get pulled into.

The guns still are the highlight, as expected. They’ve been appropriately redesigned to fit with the fantasy world, and this gives a fresh feeling even while the familiar manufacturer tropes remain. The new guns manage to feel completely new but still as intuitive as you might expect from a game in the Borderlands series. This is a fantastic option if you’re looking for a new co-op looter shooter to tear through solo or with friends.

Staff Writer Rebecca Stone: Many Splatoon fans were surprised when a third entry in the series was announced to be coming to the Switch this year, and people wondered whether or not the game would be unique enough from the previous title to warrant a new purchase. As it turned out, Splatoon 3 ended up being the best game in the franchise yet and one of the most notable shooters of the year.

One of the biggest changes this time around is Tricolor Turf Wars, the new concept for Splatfests. Not only do players choose between three teams instead of two like in previous games, but it also changes the strategy when the leading team is pitted against the bottom two teams halfway through the event. The Splatoon team was clearly looking for a way to shake up the franchise’s most popular mode in a new and interesting way, and it’s most definitely succeeded.

Splatoon 3 also introduced a new type of event in addition to Splatfests called Big Run. This event built on the Salmon Run horde mode that was brought over from Splatoon 2; every once in a while, enemy Salmonids invade a standard multiplayer stage, and players can compete to see who can deposit the most Salmonid eggs in a single round. It’s a fun spin on the mode that gives players something else to look forward to every few months.

While the franchise is known for its online multiplayer modes, Splatoon 3 has the best single-player campaign in the franchise. It’s a great demonstration of how to master each weapon in the game, and the story is surprisingly dark for what appears to be a vibrant, family-friendly game on the surface.

Finally, Splatoon 3 made some important gameplay improvements, such as adding squid surge and squid roll abilities to movements and including interesting new weapons to balance battles. For anyone who is looking for the best online shooter on the Switch, Splatoon 3 is a must-play.

Managing Editor Chris Jecks: It’s well known that each of the three Call of Duty studios brings something to the table. Treyarch brings the Zombies action that it catapulted into popularity with World at War all those years ago, Infinity Ward is the king of multiplayer gameplay, and Sledgehammer… well it tries.

In 2022, it was the turn of Infinity Ward to release its latest entry in the series with the rather confusingly named Modern Warfare 2. No this isn’t a remaster of the 2009 classic, nor is it a remake technically, but a reimagining. I think? Honestly, who knows and cares? All you need to know is all your boys like Ghost, Captain Price and Gaz have all rocked up for another round of explosive set-pieces and tight, tactical gunplay in the campaign.

But, let’s be real, the majority of your time is spent in the multiplayer and it’s here that Modern Warfare 2 shines. The reworking of the weapon unlock system forces you to use guns you may otherwise never touch, and the extensive attachment and customization system means you can lean into your strengths and buff out your (or your weapons’) weaknesses. Maps are well-designed with ample sight lines for snipers and confined areas for close-quarters chaos, and there’s a plethora of new and classic game modes to keep the kills piling up.

Is it the most innovative shooter that was released this year? No, but it is one of the most satisfying, and I keep coming back to it for a sesh with the boys whenever my schedule allows.

Senior Editor Alex Gibson: Overwatch 2 didn’t enjoy the smoothest of receptions from its already-massive community of players earliest this year. There was a big buzz around its launch, naturally, but Blizzard’s failure to include the anticipated PvE mode understandably didn’t go down very well. It’s a sequel that doesn’t really feel as though it needs to exist, and we’d be telling porkies if we said it doesn’t feel more like a meaty update than a full-fat sequel.

Still, we’d also be lying if we tried to claim another game other than Overwatch 2 has given us here at Twinfinite our favorite multiplayer experiences of 2022. For all the teething issues and broken promises, it stands tall next to its rivals in the FPS/shooter space as the best of what is, honestly, not the best year for the genre.

The success of Overwatch 2 essentially boils down to refining an already superb gameplay loop, one that first left its mark on the games industry way back in 2016 with the original. The awesome blend of shooting, hero abilities, and teamwork and coordination involved with winning each match is no less brilliant in 2022. It feels more focused now, in fact, thanks to the reduced 5v5 lobby size, which removes the unfavored double-tank meta that dominated the first game.

There’s new content, too, like the Hero Rammatra, Push mode with three bespoke maps, and the introduction of Battle Passes, which include various shiny cosmetic items to grind for.

Overwatch 2 might not reinvent the formula that saw it blow up as a franchise seven years ago, but then again it doesn’t have to do any of that to be crowned our best FPS game of 2022. It’s damn good as it is, and we’re looking forward to playing it for many years to come.

Congratulations to the Overwatch 2 development team for winning Twinfinite’s best FPS and shooter of 2022 award!

This is it for Twinfinite’s picks for the best FPS and shooter Games of 2022. Be sure to let us know what you think in the comments down below!