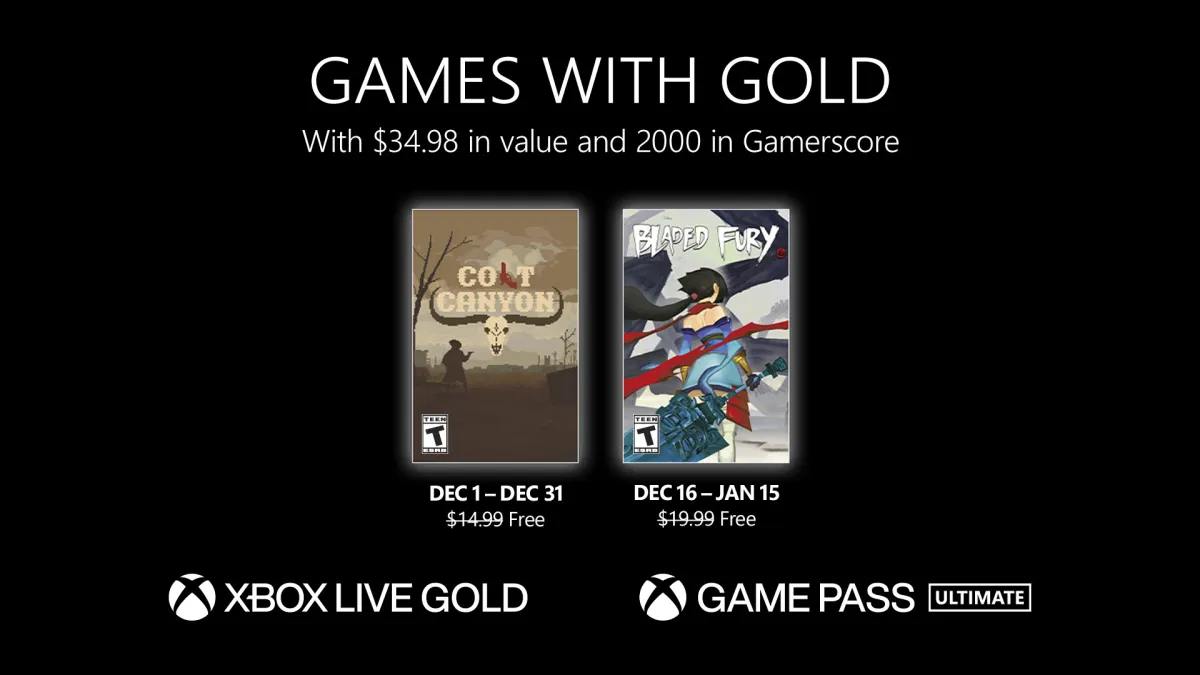 Today, Microsoft announced the Games With Gold titles that will be available to subscribers in the month of December at no additional cost.

We’re getting the 2020 western 2D pixel art shooter Colt Canyon by Retrific and the 2D action game Bladed Fury by PM Studios. The former will be available from Dec. 1 to Dec. 31, while the latter will be downloadable from Dec. 16 to Jan. 15.

Since last month (that included Praetorians – HD Remaster and Dead End Job), Microsoft removed the Xbox 360 games from the offering, which means that now the number of bonus games is reduced to two.

Mind you, the removal of Xbox 360 games is understandable, as the platform is 17 years old now. I’m also not saying the games provided are bad, albeit they’re certainly very niche.

In its marketing communication back in July, Microsoft mentioned that “Games with Gold will continue to include exciting Xbox One titles,” but from what we’ve seen so far, the “excitement” is gone.

I certainly remember the times in which the monthly announcement of the Games with Gold was welcomed with great excitement by the fans, but that is a thing of the past, and nowadays, all I see is groaning and eyes rolling skyward.

The issue is that Microsoft appears to be definitely struggling to find games to include as a bonus with the Xbox Live Gold subscription while also providing a much wider variety of titles within the Game Pass service. It certainly feels like this kind of offering is on life support and closer to drawing its last breath with every passing month.

At this point, it’s pretty much a given that most people who want free games at no additional cost will set their sights on Game Pass or Game Pass Ultimate (depending on whether they also want multiplayer or not) since their value proposition is simply disproportionate in comparison, so this scraping the bottom of the barrel certainly feels redundant.

Perhaps Microsoft would be better off dropping the price of Xbox Live Gold by a couple of bucks a month, removing the free games entirely, and shifting that focus completely into Game Pass.

That way, customers who aren’t interested in a subscription that also provides free bonus games, but simply want to pay for access to multiplayer and the other Xbox Live Gold perks, can do so and save a bit, while encouraging those who want the whole package to subscribe to Xbox Game Pass Ultimate and be done with it.

As it is now, it feels like Microsoft is providing Xbox Live Gold subscribers with as few bonus games as possible while trying oh so hard to take away from Game Pass as little as possible. They may as well go all the way and pull the plug. It’d save an employee or two some time spent every month digging and negotiating for suitable titles, and it’d save customers the monthly underwhelming feeling and groaning when they see the list.