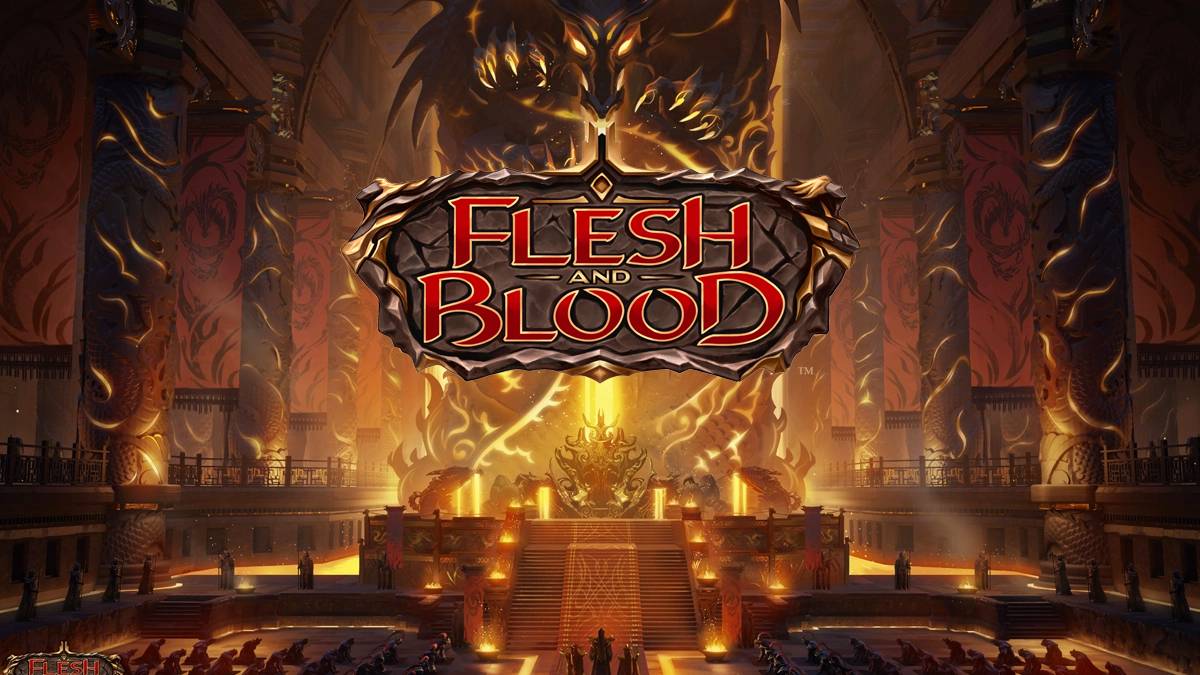 The Flesh and Blood TCG has taken the International market by storm by offering players a new way to enjoy card games by pitting class-based characters against one another in exciting duels. Similar to Wizard of the Coast’s Magic the Gathering, Flesh and Blood, or FaB, starts with a fictional setting based on a combination of medieval fantasy, feudal Japan, Chinese wuxia, steampunk, and other familiar tropes. The world is being fleshed out to a good degree and the FaB tournament scene is thriving, rivaling that of MtG, Pokemon, and Yu-gi-oh.

If you’ve never played FaB, this Dynasty this set features two new classes, the Assassin and Emperor, and brings plenty of support for mechanologists, warriors, guardians, ninjas, rangers, and brutes. There are a few cards for the wizard, draconic illusionist, runeblade, and a few others, but overall the set has plenty of appealing cards and expands the world, lore, and strategic gameplay options, especially with these top 10 cards from Flesh and Blood TCG: Dynasty.

Surgical Extraction is an example of the new contract mechanic introduced with the first assassin character class seen with Arakni. When this card is played on the combat chain, as long as it remains there you gain the benefits of the contract whenever you fulfill it. In this case, whenever you banish a blue card.

Surgical Extraction already allows you to banish a blue card if it hits, so you can always gain at least one silver token. Blue cards are primarily used for pitched resources so this contract card can hurt the majority of decks out there currently that rely on blue resources while attacking for four damage.

Skull Crack marks a new beginning for Brute cards with new bonuses to gain when you’re forced to discard cards to use Brute class powers. In this case, gaining a resource goes a long way in helping pay for more cards or weapon attacks, which means this card will surely become a staple in all Brute decks.

Other new Brute cards give you bonus effects when discarding and these new additions will help Brute start to shine and get played more often. It’s a class that relies on RNG but is still powerful and incredibly fun to play. With all of these new discard effects popping up, expect to see more orcish Brutes making their way into battle.

With Iyslander dominating the current meta, Kano, the original wizard, has taken a back seat and made Kano players feel left out. The good news is that Legend Stories Studios is continuing to balance the class from being overpowered in the Blitz format to being formidable in both Classic Constructed and Blitz formats.

Mind Warp is a card that proves that with a good balance of cost-to-resource pitch ratio, since it’s a yellow card, and its effect that does two damage gets better when you pump it up since if it does more than two damage to the enemy player, they must shuffle their hand back into their deck and redraw that many cards minus one.

This newly introduced surge mechanic is just what wizards need to expand their repertoire to be more than just big amounts of arcane damage. An epic battle is brewing between wizard players, and both Kano and Isylander

Vynserakai is the new dragon to join the forces of the draconic illusionist Dromai, and this guy is a heavy hitter. Once transformed from an ash token, this dragon attacks for six damage and threatens an additional three arcane damage if it hits the enemy player.

It only has one hit point, but just one attack from this dragon ensures a huge swing in your favor. Dragons are also epic, and this card has a nice example of a dragon from the world of Flesh and Blood and collectors will want to have all the dragons as part of their souvenir collection from Rathe.

The Jubeel, Spellbane weapon will help keep warrior-class characters tanky against magical arcane damage from wizards and runeblades. On its own, being able to attack for three damage by only spending one resource is efficient enough, but anytime you hit with this weapon, you get to make a Spellbane Aegis token.

Accumulating plenty of these tokens against a wizard or runeblade will almost guarantee you the win since each o those tokens can prevent one arcane damage whenever you choose to destroy a token. This scimitar/shamshir also looks nice and makes for a nice addition to any collector’s binder.

The Sandscour Greatbow marks a comeback for the ranger class since the Azalea character has plenty of fan support but players haven’t been able to put up tournament-winning results. Each time you activate this bow to arsenal an arrow, you can put one from either your hand or the top of your deck.

The new aim mechanic also boosts the ranger class since you can put an aim counter on the arrow card in your arsenal if it was played from your deck. Having an aim counter opens up new effects from certain ranger action cards like the Dead Eye card which is one of the best.

Not only does Dead Eye give your next arrow attack +3, but it will also allow you to look at your opponent’s hand and make them discard a card of your choice. This added pressure from on-hit effects is more than welcomed and will give anyone on the receiving end of an arrow a bad time.

This legendary rarity card is the first leg equipment for the assassin class, and it makes a necessary choice in any deck’s armor slot. It can be reused over and over. Using it over and over will also be what you want to be doing because it can prevent one damage as long as you have the two silver to pay for its repairs.

You can also use this when you attack by destroying it and giving your assassin attack action card the ability to go again if it hits. This balance of offensive and defensive capability makes this extremely valuable, especially since it will be so hard to pull from booster packs.

Allies are becoming a thing in Flesh and Blood, and this type of permanent in-play card is a great addition to the game. Other than starting equipment, the majority of cards in Flesh and Blood are placed in the discard pile or under your deck after you’re done playing them.

With cards like this Suraya, Archangel of Knowledge, it’s nice to see more cards that remain in battle that can be used over and over. This card is a Legendary rare, making it an awesome pull, and there’s also a Marvel version that features full cold foil etched artwork that has a crazy high value since Marvels are the rarest cards in FaB.

Using this card in the game is also fun since it can be played easily and provides multiple uses as an attacker that can be used each turn if it survives while gaining you life, and she can be sacrificed to prevent damage. It’s truly marvelous!

Another new type of card, Nitro Mechanoid is similar to an ally since it stays in play, but it’s a card that transforms from the combination of other cards, which are considered materials for this card. This cool new mechanic emulates the act of crafting, which has been a part of fantasy games for a while now, and it also bears resemblance to the awesome combining mechs that anime fans are fond of.

This card is also a Legendary rarity rainbow foil with a Marvel cold foil that is incredibly hard to get, but players will enjoy experimenting with and building decks around this steampunk mechanologist card. This is a fantastic addition to a collection binder and especially for fans of the steampunk genre.

Command and Conquer is one of the earliest cards that reached increasingly high value due to its impactful effect and ability to be put into any deck. This card originated from the second set, Arcane Rising, and was reprinted in the Arcane Rising unlimited edition and a small European-only History Pack set aimed at making the game more available in Europe.

Now it has been reprinted with treasured artwork as a Fabled rarity, making it the second most difficult card to pull, but you’ll definitely be cheering if you do! Other than that, hardcore players who want blinged-out decks and serious collectors will want to have as many of these as possible since this card might not ever stop being played.

Get your sets of these top 10 cards from Flesh and Blood TCG: Dynasty as soon as you can while this set is still readily available. Flesh and Blood promises to be a non-rotating game, which means all cards from all sets can always be played in the main classic constructed format unless banned or suspended. The folks over at Legend Stories Studios also announced that a cooperative PvE version of the game is going to drop soon, so be on the lookout for that. In the meantime, if you enjoy TCGs, check out the top 10 best competitive commander decks in Magic: The Gathering, and how to get started with the new Dragon Ball Super TCG Zenkai series.