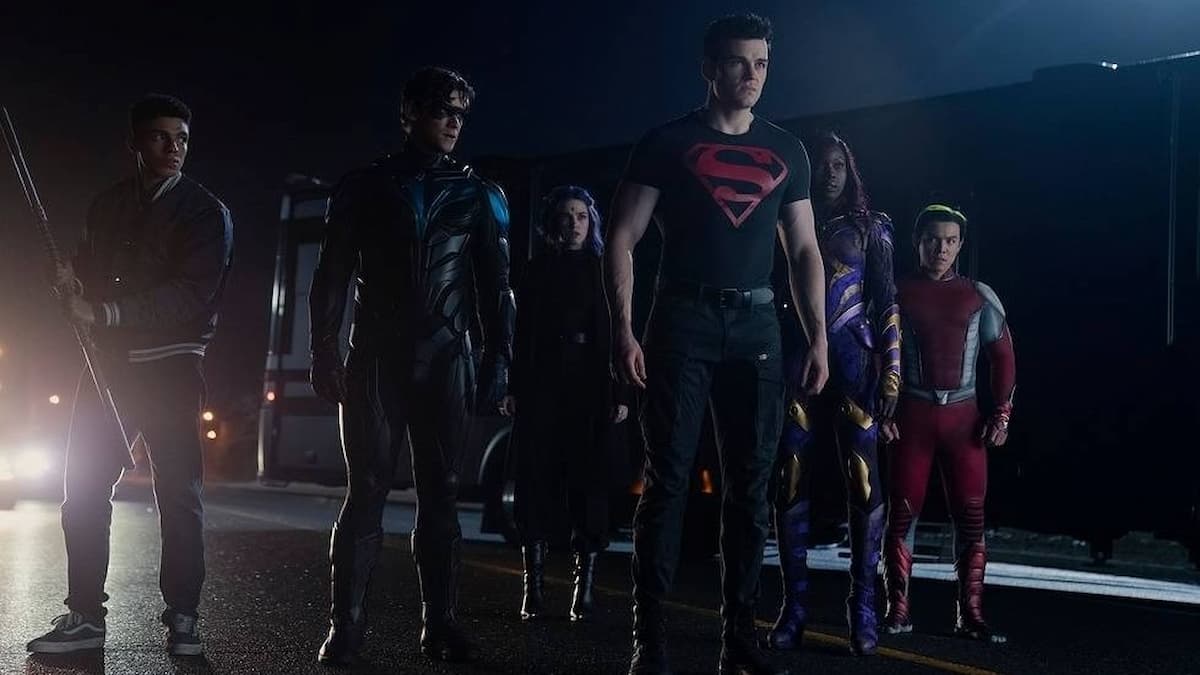 Titans is back with the first part of its fourth season, and it is by far its bloodiest yet, full of horror, intrigue, and of course plenty of blood. Unlike the past few installments of the HBO Max series, Titans Season Four is all about the individual members of the group, focusing on not only how they interact with each other as a group but also their individual journeys.

Season Four follows the titular Titans on their road trip back to San Francisco after their season-long stay in Gotham. However, the group decides to make a pitstop in Metropolis in an effort to help Conner meet his father, a decision which ends up getting the Titans wrapped up in the bloodiest and most disturbing case of their career.

Now, before getting any further into the review, it’s important to note that as of right now, HBO Max has only sent out to the press the first five episodes of the six-episode first part. Also, episodes four and five were works in progress when they were sent out, meaning that the episodes were not the complete episodes that will be able to be streamed. The story will remain the same, but the special effects on these two episodes were not completed when sent out to the press.

The first thing that must be said is that as long as the season does not completely dive off of a cliff, this is the best season of Titans thus far. One of the biggest problems with the third season is that the show expanded its roster to be so big that there ended up being characters who went majorly underdeveloped for an entire season. Instead, Season Four has its main group of Titans: Nightwing, Starfire, Rachel, Gar, Conner, and Tim Drake, and almost entirely focuses on developing these six characters, with the show scarcely even mentioning any of the other previous Titans.

The problem with this season, though, is the same problem that plagued the earlier seasons; that being that the low budget of the series is still holding the show back. There are storylines here that are simply too much for the team over at Titans to be able to produce effectively, given their apparent budget.

There are scenes early on in the season that are completely cut away from, not because it’s a good writing choice but because the scene that they have written is clearly too expensive for the show to produce. The biggest offender on the show is that of Gar, AKA Beast Boy, who, even though the character and performance are perfectly fine, the character’s abilities are hardly, if ever, truly shown, which is unmistakably due to the budget.

As said earlier though, the biggest positive of the season comes with its focus on the individual characters. However, this is not to say that the show does a great job of executing this for everyone as unfortunately, despite being the lead character of the show, the blandest character is frankly Nightwing. Brenton Thwaites has been wonderful as an actor throughout the show’s run, and that’s no different here, so the fact that the show has made him the blandest character is incredibly bizarre, especially given that the comic book character is as far as you can get from being flat.

Dick Grayson’s storyline this season revolves heavily around being the leader of the team, and is really the only one who doesn’t have a storyline outside of being a Titan. It’s a weird choice to have the character’s story be completely centered on the team, as in past seasons that wasn’t always the case, but there are still threads that are set up for the character going forward, so there could be some exciting stuff in Nightwing’s future.

The other character, who basically co-leads the Titans this season, is Koriand’r, AKA Starfire, who, unlike Nightwing, does get her own things to do outside of the team. While Starfire’s storyline is still not as seemingly central as it probably should be, there are still threads left to unravel for her plot to be interesting, mainly because it feels more akin to the earlier seasons, as opposed to her story last season. Mame-Anna Diop may act nothing like the Starfire in the comics, but unlike Thwaites, Diop has transformed her character into something fun and special, so it should be excellent to see where her character’s story goes next.

Rachel and Gar are also back, with this installment having the two in an established relationship pretty much right away. It’s great to see Rachel back around, after having very little screen time last season, with her storyline building off the back of her story in the first season, a great choice that makes Titans Season Four feel like it is much more aligned with its roots. However, it also illustrates how much Teagan Croft has grown into her role of Rachel as the character progresses in her role of being a Titan.

Then comes Gar. While he does get some interesting developments, they are unfortunately cut down by the poor pacing of his story, and as said earlier, the low budget seriously makes his character feel underwhelming. Ryan Potter is probably the most comics-accurate actor on the show, so it’s really not his fault if his story is disappointing, as the actor is quite fun when able to go full Beast Boy, which tragically rarely happens.

The only character who joined the team in Season Two that is still around is Conner, AKA Superboy, who gets much more to do this season than he did in the last one. One of the better things that Titans has done is to explore the fact that Conner is the son of both Superman and Lex Luthor. It gives the character some incredible complexities, which Joshua Orpin has done a great job doing thus far. So, it was exciting to have one of his fathers introduced officially this season with Lex Luthor. However, this storyline can’t help but feel flat as only one of Conner’s parents are actually around in the series, with Superman never showing up in person.

Also, it doesn’t help that Titus Welliver is a bit unmemorable in the role of Lex Luthor, leading to a plot that is much more vanilla than it should be. Now don’t get me wrong, Welliver is nowhere near as bad as Titan’s version of Bruce Wayne, as instead, the Lex here feels more like he is just an average adaptation of the character. It’s great that the show is trying to explore the complex person that is Conner; however, as the show only has one half of the equation, it can’t help but feel like a major letdown concerning its execution.

The last of the Titans to talk about is the group’s newest member, Tim Drake, who has yet to become Robin in the series officially. Jay Lycurgo was a highlight of Season Three, so getting to see him return as part of the team this season is certainly a joy. Tim Drake receives one of the more interesting individual storylines of the season so far, with him bringing in even more representation to the team that felt genuinely organic and nice to see. While some people may have a problem with this change, it’s done well enough that hopefully the vast majority of Titans fans will come to accept it. Not to mention that the character is the only one currently a superhero in training, so that makes for an interesting wrinkle.

As series fans may have noticed, there are three major new characters that have yet to be talked about, so let’s take a look at these characters now. First, there’s the major antagonist, the terrifying villain that is Mother Mayhem, who, when I say is terrifying, I genuinely mean terrifying, especially when the character is much more enigmatic in the earlier episodes. I can’t go too much into these new characters because there are a lot of spoilers when it comes to them. What I will say regarding Mother Mayhem though, is that when the show dives deeper into the character’s backstory, Franka Potente does an outstanding job at portraying the complex and weirdly heartbreaking story.

Another one of the new characters is Brother Blood, a character with a surprising storyline that can be a bit unpredictable at times. I definitely don’t want to say too much regarding his character so that people can be as surprised as I was, but it’s worth mentioning that his character fits in surprisingly well, especially when looking back at the previous seasons, so it should be fun to see what is next for the character.

Then the last significant new character is Jinx, who actually hasn’t had as much to do as one would expect given the character’s importance to the Teen Titans of the comics, not to mention the importance that the story is also placing on her. What has been shown thus far has been fun, and Lisa Ambalavanar has done a great job in the role. Overall, the new characters feel like positive additions to the show, with the actors pretty seamlessly fitting in and not feeling like their characters were tacked on to the series.

At the end of the day, Titans Season Four Part One is, without a doubt, a step in the right direction, as the series feels like it has taken some of the criticisms that have been levied against it to heart. With the show switching back its focus to be on a core group of characters, it’s made most of the characters start feeling like individuals again. That being said, the show’s writing repeatedly can’t make up for its low budget, which sadly can lead to events being quite distracting and disappointing in the long run.

If you’ve stuck with Titans thus far, this is a season that is without a doubt worth checking out, with the first part of Season Four starting its run with two episodes streaming on HBO Max this week on Nov. 3. After that, the rest of the six-episode first part will stream one episode a week until the part ends on Dec. 1, 2022, with Part Two set to stream on HBO Max sometime in 2023.