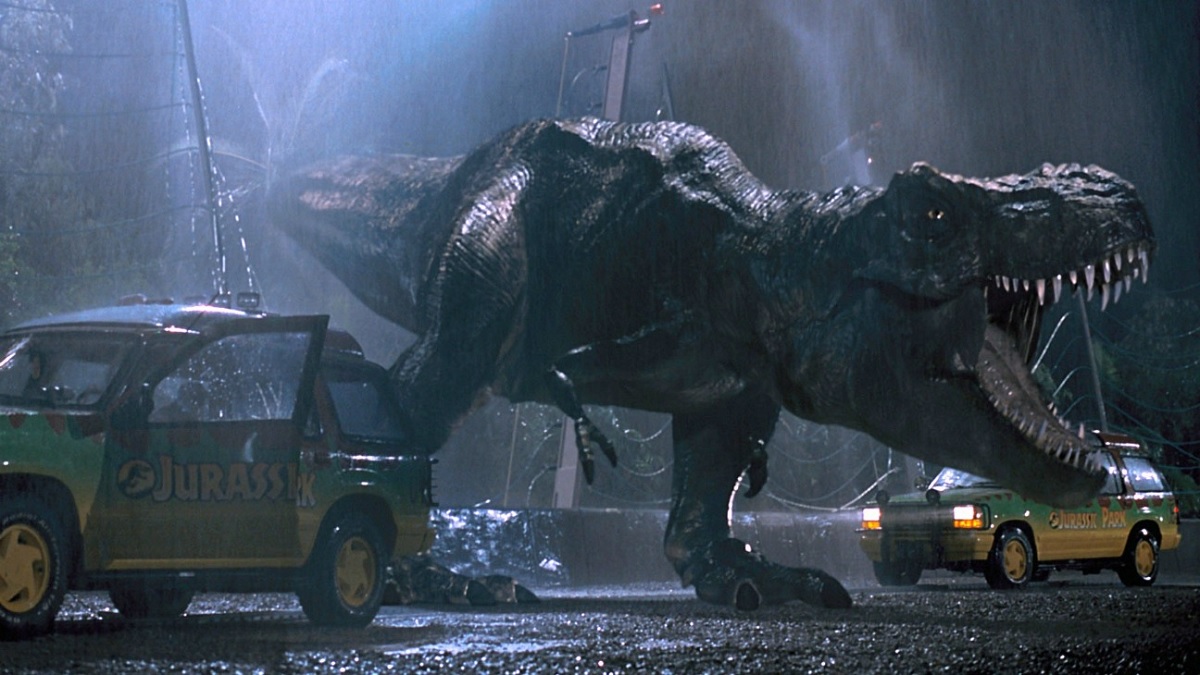 You’d have a difficult time finding a random person on the street that hasn’t watched any of the films in the Jurassic Park franchise, especially the very first one. It’s safe to say that Jurassic Park transcends the age gap, capturing the imaginations of so many people, whether they love dinosaurs or not. What makes it special is facing the horrifying truth that, at some point in Earth’s history, these creatures roamed the landscape, and Steven Spielberg helped bring some of that terrifying realization to the big screen. Here’s where all Jurassic Park & World movies rank from worst to best.

Starting off with what Jurassic World Dominion did right: the FX crew did a phenomenal job, along with the cast. In terms of visual eye candy, Dominion is by far the best looking film in the franchise. It was a breath of fresh air seeing animatronics being used instead of solely relying on CGI.

Unfortunately, neither of those aspects are enough to make for a plot that has no idea what it wants to be, so it throws everything at the wall. Fallen Kingdom set up a future wherein dinosaurs and humans are now forced to coexist, but rather than explore that idea in Dominion, the film is more concerned with child abduction and bugs.

It isn’t just the story that gets wasted, but the characters as well. Kayla Watts (played by DeWanda Wise), for example, is massively underutilized. We see hints of an interesting character, someone who’s forced to confront the suffering her position causes, but she ends up being another helping hand. No one, other than Claire, has any real character development or satisfying arc.

The Lost World: Jurassic Park is such an oddball in the franchise. It doesn’t carry itself with the same philosophical weight as the first film, but still follows familiar themes of exploitation and corporate greed. We’ve seen that already in the first installment, so getting bonked on the head with the same message is unnecessary.

Where The Lost World trips over itself is having low-energy scenes in between very intense and very unique set pieces. Witnessing a child use gymnastics to kick a raptor? Big snore! Watching a T-Rex stomp through San Diego? Thrilling and exciting!

It should also go without saying that The Lost World has a fantastic cast, too; Jeff Goldbulm’s wit shines through the entire film. Despite being very low on this list, you should still watch The Lost World if you like Jeff Goldblum.

I’ve grown more fond of Jurassic World: Fallen Kingdom over time, even though the ending is still horrendous and by far the worst in the franchise. I cannot bring myself to believe that a child just decided the fate of such dangerous creatures that have no business being there in the first place. Every person who dies at the hands of a dinosaur, accident or otherwise, is on her hands.

Putting that aside, Fallen Kingdom still explored a natural aspect of Jurassic Park that wasn’t fully realized until now. It’s essentially a horror film with dinosaurs, spooky mansion and all. This time it isn’t a big, bulky Indominus Rex hunting the main characters, but a slim and nimble Indoraptor that stalks its prey. You can hear a T-Rex coming a mile away; you won’t hear the Indoraptor.

What Fallen Kingdom also does right is add to Claire’s character in a meaningful way. Her turn towards dinosaur advocacy as a way of atoning for her mistakes is totally believable, which eventually comes to a satisfying conclusion in Dominion.

Jurassic Park III Isn’t as grandiose and thought-provoking as the first film and instead opts for a more adrenaline-filled adventure on a small scale. Despite a narrower scope, it’s still a fun and entertaining ride, along with Sam Neill making a return as Alan Grant.

That’s not to say that Jurassic Park III doesn’t have anything to say; rather than explore corporate greed, the movie sets up the repercussions of personal greed. We see this right at the start of the film wherein Grant agrees to give the Kirbys a tour of the island, or the Kirbys and their deceit, or when Billy steals raptor eggs in an effort to fund their digsite.

Another great aspect of Jurassic Park III is how it expands on the lore of the franchise. It features new dinosaurs, like the Spinosaurus and the pack mentality of raptors to a greater degree than the first film. More importantly, we bear witness to many of InGen’s secret projects and the aftermath of an unchecked dinosaur environment. Best of all, the movie has a comfortable 90-minute runtime.

Jurassic World gets far too much hate, despite having a clean script with surprisingly little fluff. Part of that is surely due to the bar Spielberg set with the first film, but Jurassic World earns its place here, nonetheless. This time, we get to see John Hammond’s dream come to fruition and, of course, its downfall.

The film starts off strong by having us immediately connect to a normal family with relatable family drama. What that does is solidify the idea that even less-than-wealthy families are able to experience the park, just as Hammond had hoped. In many ways, it’s greater than he could’ve imagined, from baby dinosaur petting zoos to a Mosasaurus water show.

What Jurassic World gets right, other than a great cast and good story, is that it explores dinosaurs in new and interesting ways. What would you do if you saw every dinosaur there was to see? You’d probably get bored and want to see something new, like the Indominus Rex. We see how corporations run with that mentality for “bigger and badder” and how it ultimately unravels the park.

Jurassic Park is, without a doubt, the best of the franchise and arguably one of the greatest films ever created. Every aspect of the movie is perfect—the writing, the cinematography, the acting, all of it comes together to tell a compelling story with interesting characters and deadly dinosaurs. Of course, John Williams’ iconic score cannot be overlooked, either.

Right out of the gate, the opening scene sets the mood for the entire film: despite their best efforts and safety precautions, life will not be caged. It’s that hubris—and internal sabotage—that ultimately dooms the park. Jurassic Park doesn’t stop; it keeps you at the edge of your seat to see how it all pans out.

Even though Jurassic Park features scary dinosaurs, it never lets that overshadow the characters. It’s first and foremost a human story using dinosaurs as the background, showcasing how you might act if you were face to face with a raptor or T-Rex.

With that, we close the lid on ranking all Jurassic Park & World movies from worst to best. For movie buffs, check out our top 10 best scary alien movies or if you prefer gaming, see if you have one of the rarest N64 games in your collection.