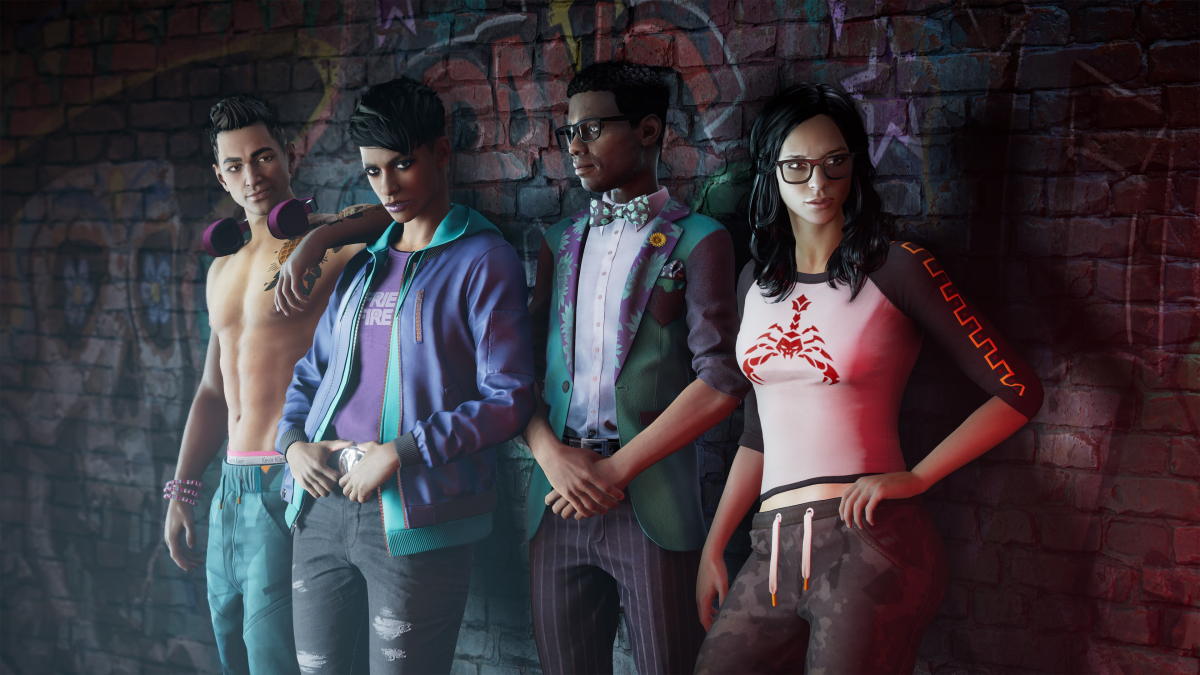 Saints Row is finally here, and nothing brings a game to life more than the people who voice our favorite characters. The re poop offers some fantastic and frankly surprising talent. It’s very apparent that Volition is busting out all the big guns and making sure that the Saints sound as good as they look. Saints Row is also all about customization, and with that comes a number of voices you can select for your own boss. Follow along as we dive deeper and meet the voice actors of Saints Row 2022.

Jeannie is the first of our three Saints we’ll be covering today, and she stars as the voice of Neenah, the Saints very own getaway driver. Jeannie has a long and very prestigious career as an actress. Mainly focusing on Anime and voicing characters in One Piece, Hunter x Hunter, and even Tokyo Ghoul: re. She is also featured as the voice of Vex in League of Legends and Kujou Sara from Genshin Impact.

Less shirt, more power. Kevin is the guy who knows, well, other guys. His voice actor is none other than Greg Chun. If that name doesn’t ring a bell, then look no further than Squid Game. Greg actually starred as the English voice for Seong Gi-Hun and has a long and prolific career in both games and other media. Some of his other notable roles have been voicing Ike in Super Smash Bros. Ultimate and Muzan Kibutsuji from Demon Slayer.

Our third and final (non-playable) member of the saints is our criminal mastermind, Eli. Eugene Byrd is the voice of this witty, intelligent criminal. Eugene himself hasn’t been featured in many video games; instead, he’s been prominent in shows like Bones as Dr. Clark Edison and most recently starring as CJ in Reasonable Doubt. He’s also had some on and off roles in American Dad, Family Guy, and Rise of the Teenage Mutant Ninja Turtles.

Next up are our boss’s voices. Kicking it off is Max Mittelman as the #1 boss voice. Continuing our trend of VA superstars, max is most prominently the voice of Saitama from One Punch Man. He’s also the voice of King in Seven Deadly Sins and Ryuji Sakamoto from Persona 5. Max promises to bring us a self-made go-getter murder machine version of the boss.

Erica is our #2 boss and hails from Boston, Massachusetts. She’s most well known recently for voicing Black Cat in Marvel’s Spider-man. She’s also been the voice of Cassie Cage from Mortal Kombat and is even starring in the upcoming God of War: Ragnarok. Erica’s version of the boss looks to be a tough woman who always does the right thing for those they love and features a nice sprinkling of angst.

Continuing our theme of anime VAs working on Saints row is Catero Colbert. Catero actually did voices for Naruto: Shippuden as Killer Bee and voiced the masked Araya in Boruto. Catero is actually a fan of Saints Row and was originally hired as the voice of a pedestrian but hit it off with one of the game directors and ended up as voice #3.

Bryce Charles is primarily a TV and film actress turned Saints Row boss. She’s known for Starring as Marlowe in Tales of the City, Hazel in Atypical, and Crystal in Black-ish. Saints Row is actually her first video game VA experience and hopefully won’t be her last.

Antony Del Rio began originally working in TV and film, later transitioned into voice acting after giving a unique personality and life to Ekko from League of Legends and Pit/Dark Pit from Kid Icarus. He’s also known for playing Chico in the Metal Gear Solid Series. Antony also wants you to know when you use his voice to remember that he has a mustache.

Emily O’Brien is a three-time Daytime Emmy-nominated actress and writer. She also continues our trend of League of Legends VA’s in Saints Row. Voicing both Camille and Samira. She was also the actress for Amelie in Death Stranding. Emily is bringing a nice British and posh variation of the boss to our characters.

Adam isn’t unfamiliar with the kind of action we’d expect in Saints Row. As a prominent stuntman, he moved to film and VA work after having his unique vocal talents discovered. He most notably starred in Vermijo as Jim Lockhart, and he’s using his prior western experience to bring us a cowboy or western tough guy version of the boss.

Rachel Butera is here with the Saints on her first AAA game voice acting role. Promising to bring us a cruel gritty, and nefarious version of the boss and hopefully bring some of her great humor along for the ride. She’s also worked on Star Wars: Episode VIII – The Last Jedi as well as Boss Baby previously but is more well known for her celebrity impersonations.