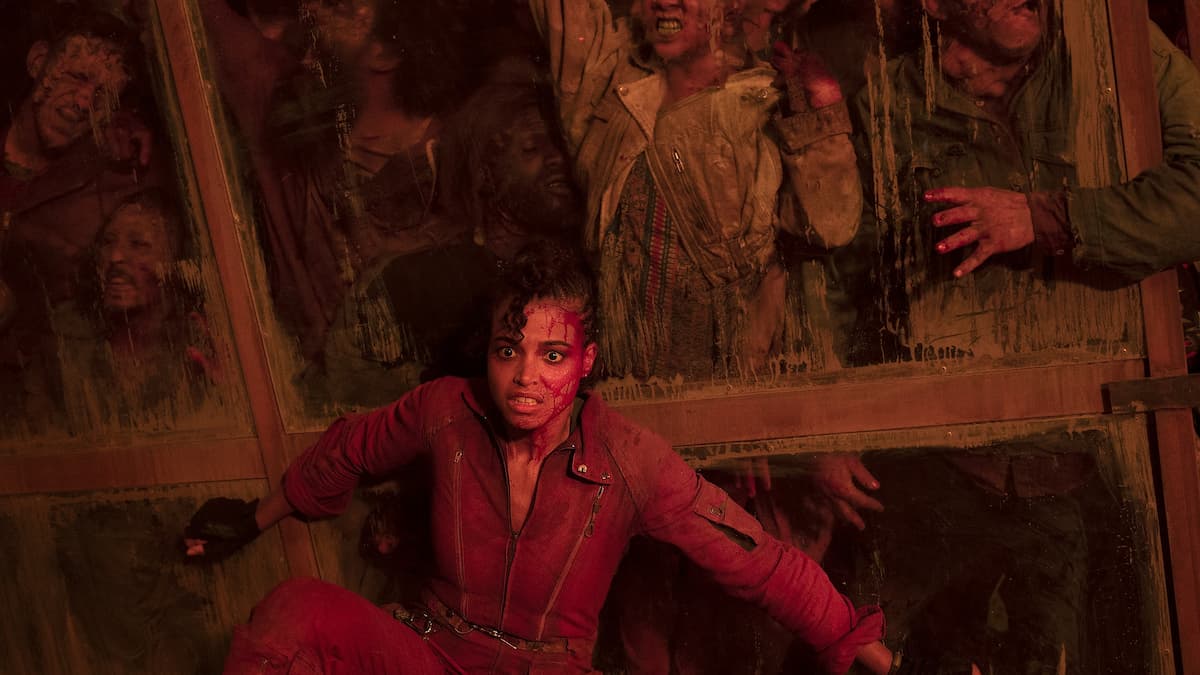 When I saw that there was another Resident Evil project, I was beyond cautious, especially after seeing last year’s Resident Evil: Welcome to Raccoon City, which was not good at all. We have been given live-action movies previously, mainly in the form of the Milla Jovovich action-horror movies, and while I actually liked the first Resident Evil movie, I did not enjoy any of the other films at all. So, it’s fair to say that my expectations were pretty much at rock bottom for this new show.

Resident Evil (2022) takes place in two different time periods, one in the present, 2022, and one in the future, 2036. In the year 2022, Albert Wesker and his two daughters, Jade and Billie, are brought to New Raccoon City in South Africa, where Wesker has been brought in to help with the production of the Umbrella Corporation’s new product, Joy. Meanwhile, in 2036, Jade Wesker is trying to survive the absolute carnage that has wiped out six billion people due to something going wrong with the Joy drug.

It is worth noting that the series seems to take place in a universe separate from the games, but certain events of the game series have taken place within Resident Evil (2022). Part of the fun of the Netflix series is trying to piece what events from the games have indeed taken place in this universe.

So, with that out of the way, let’s talk about what I think works about the series. First of all, the Netflix series manages to have some incredibly fun easter eggs for long-time Resident Evil fans to enjoy. I won’t spoil them here, but there are name drops, creatures, specific event references, etc., that are sure to make fans of the video game series smile.

That said, something that Resident Evil: Welcome to Raccoon City got wrong was that it tried to cram as many easter eggs as the movie could, which made it feel as though they were trying to go through a checklist. On the flip side, Resident Evil (2022) not only spaces out the easter eggs, but the show also doesn’t hit you over the head with them. Some are blink and you miss them, while others are incredibly important to the story. When watching Resident Evil: Welcome to Raccoon City, I often found myself rolling my eyes at the easter eggs; however, when I was watching Resident Evil (2022), I found myself much more excited, especially for specific references which were particularly well built up to.

I believe that the key to Resident Evil (2022) having much more successful easter eggs is that the episodic format allows for easter eggs to be properly dispersed and feel as though they are meant to be in the story. It’s also worth mentioning that the treatment of the different enemy types is night and day comparing Welcome to Raccoon City and Resident Evil (2022), with the latter providing much better overall designs.

As for the plot of Resident Evil (2022), I found it much more intriguing and got me much more invested than I had anticipated. Both storylines are, for the most part, pretty interesting, particularly the one in the present day. I was surprised to see some social commentary in the series, mostly revolving around mega corporations and how they treat employees and consumers, but unfortunately, this does get a bit overshadowed by other story events. I could definitely see the show bring more of this in future seasons as it is heavily hinted that they plan to; still, it is a bit disappointing that it isn’t in this one.

Another major positive is the acting, primarily when it comes to those in 2022. I may have some problems with the acting, but I’ll get more into that when we leave the positives. Lance Reddick, in particular, stands out, as he is an absolutely fantastic Albert Wesker. Yes, Albert Wesker has been race swapped, but Reddick does such a tremendous job portraying the character that it doesn’t matter. He is the perfect example of how race swapping can work as he is the Albert Wesker from the games, without a doubt.

Long-time fans of the video games will not only be happy to see references to many different games from the series but also that while the series is first and foremost horror, some campy elements are intertwined here as well. In particular, there’s a reveal towards the end of the season involving a certain creature from the video games that is so ridiculous that it took me right back to that original encounter in the games, which was frankly glorious.

Now, as for the things that I didn’t like about the series. First of all, the juxtaposing of the two time periods is incredibly distracting and disorienting. Sure, there is a significant time jump explaining why the two time periods feel so different, but I still couldn’t help but feel that these two time periods belonged to different shows. It also doesn’t help that there are things that happen between the time jump that would help bridge the gap more, which we do not see at all. It feels as though those scenes were purposefully saved for possible future seasons, but that doesn’t change the fact that the world feels completely different without even getting the bridge between them by the end of the season.

This also results in one of the problems that I have with the acting, as while I didn’t mind the casting of different versions of characters like Older Jade and Younger Jade, they did not feel like they were portraying the same character at all. I would sometimes forget that these were supposed to be the same person. There are certain scenes throughout Resident Evil (2022) that are supposed to be emotional because you are witnessing what happens to Younger Jade, but these scenes end up falling completely flat because you have to remind yourself that these are the same characters.

Having two completely different feels between the two time periods not only results in creating tonal whiplash, but it also creates a split in which storyline the audience will prefer. I will say that I personally found the present-day storyline a lot more intriguing, so I often found myself wishing to go back to that storyline when I was stuck following the future one. I will say, though, that the future storyline will really speak to those who liked the Milla Jovovich Resident Evil movies. In general, those who like the Resident Evil video games are more likely to enjoy the events of the present, while those who enjoy the action Resident Evil movies are more likely to enjoy the events of the future.

Something else that I couldn’t help but notice is that there are scenes where characters have an incredible amount of plot armor. This gets to the point where it took me out of the show, as tons of people around the named characters are dying, yet somehow the actual named characters are surviving. It can get to be frankly ridiculous during certain moments.

When going through this review, I have mostly gone through it from the point of view of a Resident Evil fan because that’s what I can personally speak to. However, I believe it’s also important to ask, how will non-Resident Evil fans enjoy Resident Evil (2022)?

I believe that audiences will have fun with it for the most part, but as I mentioned earlier, there are some glaring issues with the series, ones that I believe are partially remedied by the easter eggs, which means that people who aren’t fans of the series, don’t have these easter eggs to distract them from the problems. It is important to note that the story does not require any prior knowledge, so those of you who have never played the video game don’t need to, as you will understand the story just fine without having ever touched anything Resident Evil.

So, if you are someone who is interested in a plot that combines greedy corporations with tons of zombies, then there’s fun to be had with Resident Evil (2022), especially as you can turn it on and watch it at your leisure on Netflix.

Resident Evil (2022) would prefer that its viewers be in a weird grey area where they are fans of the game series but are extremely open-minded to having the series deviate from the source material. While this audience is by no means the only audience that can watch it, as I believe that non-Resident Evil games fans can get plenty of enjoyment out of the series, it is the audience that is most likely to have a good time, primarily because of the sweet easter eggs that are there to distract you. Don’t get me wrong, the easter eggs are fun and, for the most part, well done, but that doesn’t mean that the issues this series has can be completely forgotten.