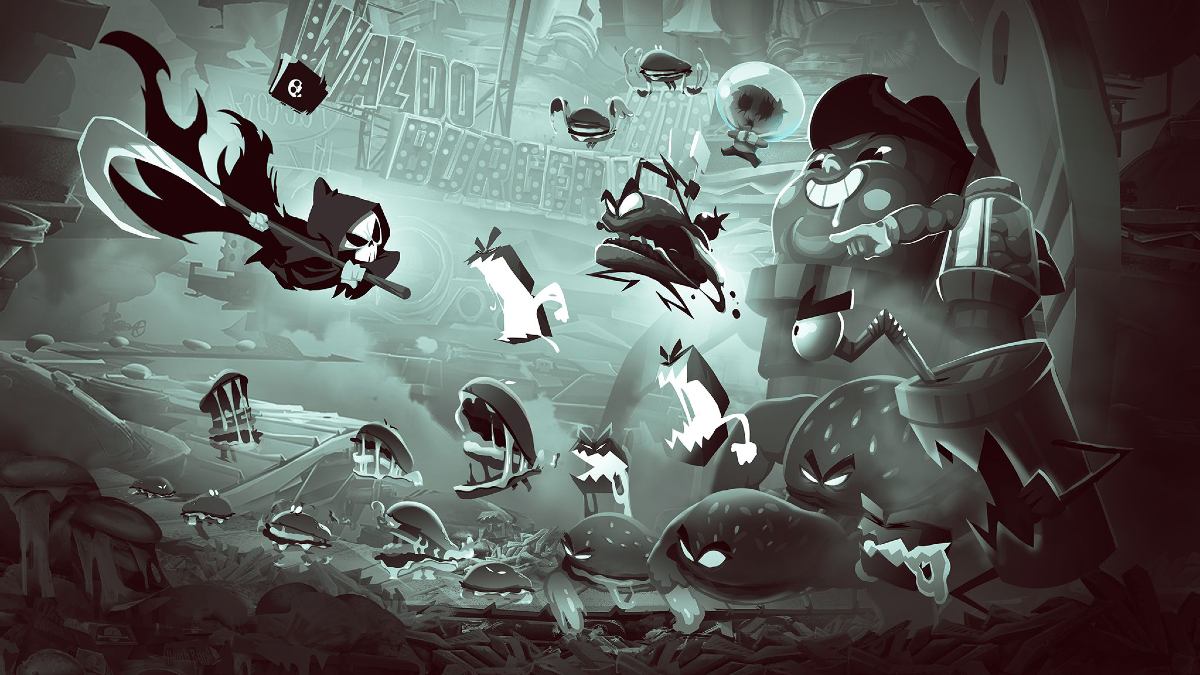 Roguelikes are one of the most popular and in-demand style of games in the industry over the past few years, with titles like Hades and Dead Cells setting the bar high when it comes to quality gameplay and replayability. As such, any new game that tries to break into the genre really needs to try and do something interesting to succeed; that is exactly what the team over at Magic Design Studios is hoping to accomplish with Have a Nice Death.

Released into early access on Mar. 8, 2022, Have a Nice Death is a 2D Action Roguelike where you play as Death, CEO of Death Incorporated, who currently finds himself teetering on the edge of burnout. In order to restore order, you must take control of the Grim Reaper and help him show his employees who is boss using none other than his trusty scythe.

Since its release, Magic Design Studios has been hard at work adding new updates for the game, tweaking quality of life stuff, and adding in items here and there to improve the game step by step. Today, Have a Nice Death looks to take an even bigger leap forward, as it releases its Fast Food update.

Magic Design Studios Creative Director and Animation Director Nicolas Léger joined me to talk a bit about the update, the game’s inspirations, and much more down below.

Nicolas Léger: How could I resist a deliciously juicy burger? Personally, I try to avoid temptation altogether. I am at an age when I need to be careful about what I eat … but we indulge occasionally in pizza as a family dinner.

Andrew: Which new enemy is your favorite in terms of its design?

Nicolas Léger: I love each and every one of them for what makes them unique. We have a burger using his own toothpicks as a weapon (Pierce Görske), a candy jar that explodes in an avalanche of jawbreakers(Sweetart), a possessed burger container (Waldo Box), a small, but deadly fellow chewing gum (Bubbaboom), and a gluttonous, but rather friendly-looking, double burger (Burgeww).

Andrew: What inspired you to make Fast Food the center of this update?

Nicolas Léger: Diabetes and cholesterol are among the top causes of death globally. We wanted to tackle a few different themes. We wanted to focus on the (almost sickening) abundance of food, but also highlight the food-processing industry, with its massive automated production chains and slaughterhouses.

The idea was to merge mechanical and organic elements. We picked a few symbols of junk food, like burgers, soda, and fries… but there were also so many others to choose from. We wanted to evoke a typical ’50s diner aesthetic. Add to this a slaughterhouse background and a yellowish tint as if everything went through a deep fryer, and there you have it: absolute disgust!

Andrew: Can you elaborate a bit on the new difficulty modes, spells, and weapons that are coming with the Fast Food update?

Nicolas Léger: Our new update introduces quite a few new weapons and spells. There is the Death Star, a new Cloakweapon that I like a lot for its efficiency and “sharp” flair. It is unique in that its damage scales with the

Scythe. As for the spells, we have Frostbreeze, which pierces and slows enemy attacks. Frostoxic summons stalagmites around the player. Stormoath hits nearby enemies at random, and finally, EyeSpy summons a sentinel that shoots at your targets.

The new difficulty modes are one of the most exciting features in this update. After finishing the game, you will be able to access modifiers, allowing you to increase the difficulty of future runs. It can range

from a global increase of all bosses’ damage output, to constant damage dealt to you at periodic intervals, like at the beginning of every sublevel.

Andrew: What game would you most compare Have a Nice Death to? What were its inspirations?

We had four games that we used as inspiration – Ori and the Blind Forest for its undeniably beautiful graphics, Dead Cells for its game loop and efficiency, Hades for its narrative approach, and Hollow Knight for its cartoony style.

Personally, I am not as knowledgeable as the rest of the team when it comes to video games, so on the artistic side of things, animated shorts, movies, and series were my biggest sources of inspiration. For example, Tim Burton has had a tremendous influence on the project.

Andrew: What would you say to people who haven’t played Have a Nice Death, who are interested in playing?

Nicolas Léger: It is easy to play, intense, and incredibly exciting. It’s an action-packed game where you are always flirting with the risk of losing everything. The game has its own atmosphere, almost monochrome, and is full of charismatic characters – sometimes fun, sometimes terrifying, but always unique.

We think players will really appreciate the smooth animations, impressive weapons and gear, and the parody of corporate life in the underworld, all in its own darkly charming animation style. There is so much to do in Have a Nice Death, especially as you never play the same game twice, thanks to its procedurally generated levels.

On top of that, as it is in Early Access, the game continues to evolve and improve based on the players’ feedback.

Have a Nice Death is available now in early access for $14.99 on Steam.