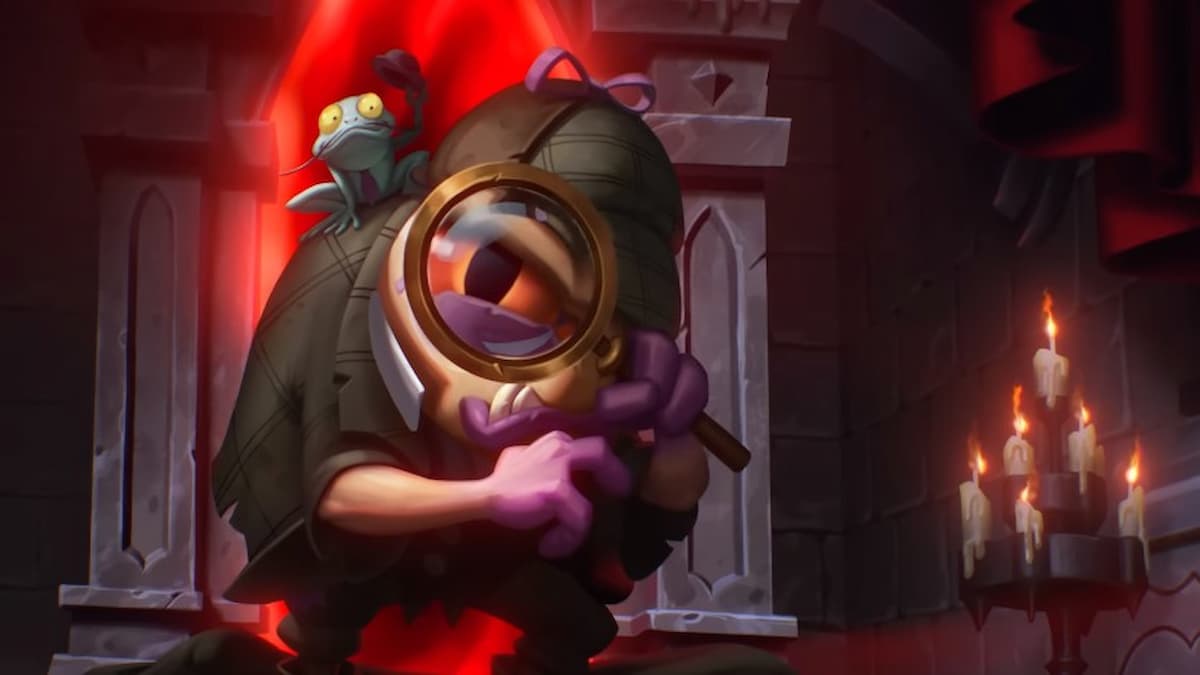 Earlier today a brand-new expansion was announced for the digital card game, Hearthstone. Murder At Castle Nathria is the second expansion to release this year and the first since Voyage to the Sunken City launched back on Apr. 12. Like past years, this second expansion is set to release in late Summer on Aug. 2.

First off, the cinematic trailer for Murder at Castle Nathria was released on YouTube. Since it is a cinematic trailer, not much of the information is relevant to how this set will actually play in Hearthstone. However, it has plenty of background information to help build up the story behind the cards that are releasing later this summer.

In the trailer, it appears as if Sire Denathrius of Castle Nathria has been killed. There’s an unmistakable chalk outline of where he must have been murdered and Murloc Holmes is on the case. Down below is the full story summary from Blizzard as well as the cinematic trailer.

Come investigate Hearthstone’s next expansion! Sire Denathrius, the ruler of venthyr, was accused of causing an anima drought in the Shadowlands. He thought a nice gathering at Castle Nathria might help clear the air, but instead he has been found dead! Now Murloc Holmes has been called to solve the case.

Following the cinematic reveal of the latest Hearthstone expansion, another YouTube video was dropped formally announcing the new set.

Next up was the Sanguine Depths card. This card damages a minion but also gives it a plus one attack boost.

Sanguine Depths is the first example of a brand new type of card called a location card. These cards have activatable effects that drop the durability of the location card by one when used. It also goes on a one-turn cooldown after being activated. Additionally, they cost no mana to use and cannot be destroyed unless another card specifically says it can destroy the location card.

The next card revealed was the Priest of the Deceased minion. This card has the Taunt ability and the new Infuse keyword. Cards with this text need to use Anima to restore their lost strength. Any time a friendly minion dies, the Infused cards in your hand will absorb their Anima. Priest of the Deceased requires 3 Anima to regain +2/+2 to become 4/5. Also, a little neat feature is that the card art will change when a Minion is fully infused.

Decimator Olgra was the next card revealed in the Murder at Castle Athria announcement video. This 3/7 Minion has a Battlecry ability that makes it gain +1/+1 for each damaged Minion and then it attacks all enemies.

After Olgra, the 3/4 Minion, Prince Renathal was revealed. This card isn’t a very powerful Minion on the field, but just having it in your deck increases your maximum deck size and health by 10. This card is available to all players for free right now.

Another Minion was next in Baroness Vashj (3/6). Any time this card would transform into another Minion, you summon that other one instead.

To go along with that effect perfectly, the Muck Pools card was revealed next. This card lets the player transform a friendly Minion into one that costs one more.

It was also revealed that the Infuse ability is not only limited to Minions. The Shadow spell, Door of Shadows, lets the user draw a spell. When infused, it also lets you add a temporary copy of the drawn spell to your hand.

Back to Minions, Suspicious Usher was revealed next. This 1/3 card has a Battlecry ability that lets the player Discover a Legendary Minion. However, if your opponent can guess which one was discovered, then they also get to add a copy to their hand.

It’s also worth noting that the Hearthstone Murder at Castle Nathria expansion will include 135 new cards along with 10 Legendaries.

You can check out the card art of all of these cards mentioned in the trailer down below.