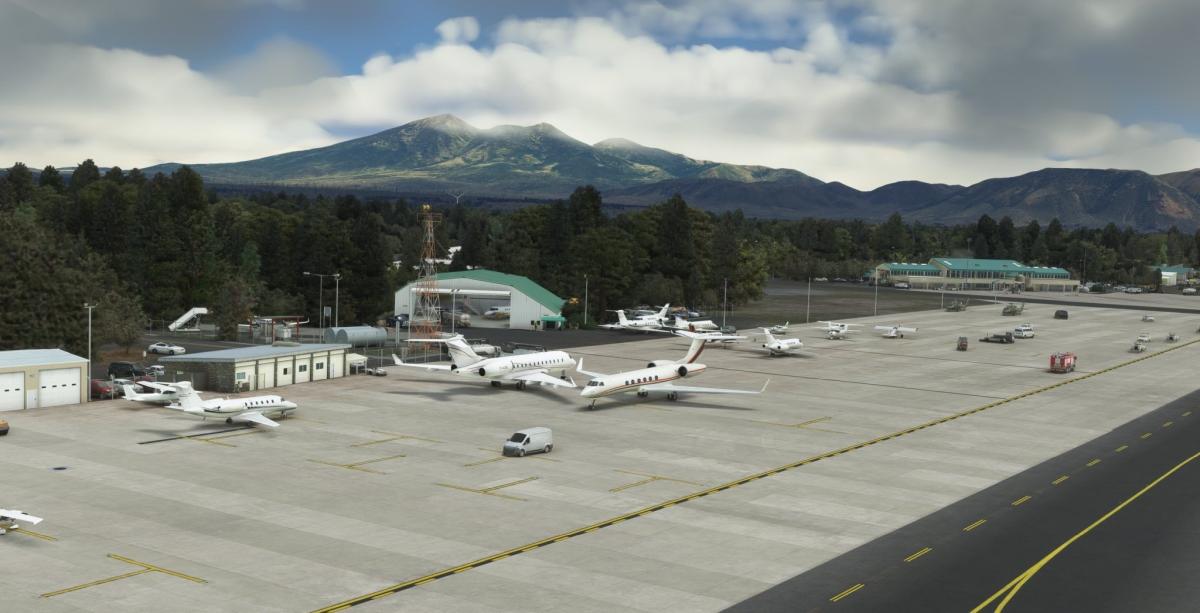 We start with UK2000 Scenery, that despite the name is continuing its string of American Airports. Specifically, they announced Flagstaff Pulliam Airport (KFLG) in Arizona.

While it’s not a large airport and mostly focuses on General Aviation, it does host scheduled regional flights operated by American Eagle and United Express, so it’s perfect for the CRJ 700 lovers out there.

It’s releasing soon, and the developer’s next airport after it will be a return to the UK.

We then hear from SimWorks Studios, which provided a development update and early screenshots of the models of the Van’s Aircraft RV-10 and Pilatus PC-12.

“Kevin recently finished the RV-10 exterior model. The textures and interior model have not been started yet, as the point is to get the shape of the aircraft as accurately as we can first. With that written, we are happy with it and can show you a couple of WORK IN PROGRESS screenshots. The model will be to the same high standards as the RV-14 -even better in some areas- and we don’t expect it to take much longer. Speaking of the RV-14, we weren’t able to submit it for Xbox as we had to take care of some minor quirks we discovered. We anticipate to have the update cleared and shipped next week.

Next, some PC-12 news: we are still picking away at the details of the 3D model, but we can finally show a couple of renders. Keep in mind that the model is undergoing improvement, so this is not close to final by any stretch! The next major breakthrough has been made in regard to the engine simulation, however! The mighty PT6A-67B is now tuned with the correct torque and fuel flow at all altitudes. Startup times are timed and close to the real thing. But the best is yet to come! Using some new tricks, we have written our own Fuel Control Unit for the engine. This allows us to introduce a custom startup sequence with more accurate fuel flows, fuel pooling & draining in the engine, realistic Manual Override lever operation and more control over the power lever. Next steps are to connect it to a new, custom throttle and conditioning lever system that will allow realistic beta range implementation.

After, a new ITT system will fall on top of it to better simulate the engine behavior. For now, we are interested in doing a basic ITT simulation, but better than Asobo’s. If time permits, we also want to introduce factors such as the effect of wind blowing into the intake (positive) or exhaust (negative) during start-up. When the basis of the framework is solid, we will look into hung starts (important) and component wear (cool but not necessary). The Kodiak has also benefitted from this new research, as the next version will feature a functional emergency power lever. Unfortunately, it will not benefit from the new engine simulation, as we want to make sure it is stable before rolling it out into our products.”

We also get a release from AG Sim, which launched a small airport in Austria, Hohenems-Dornbirn Airfield (LOIH).

Interestingly, it includes a working runway indicator, which is common in airports in Austria and not often simulated in a working state.

You can purchase it on SimMarket for $10.51 plus applicable VAT.

Interestingly, we also get word from Technobrain, which is working on a very substantial update of its Kansai International Airport (RJBB) in Japan. If you’ve read my review, you’ll know that one of its major flaws was the lack of interior modeling, which in an “all-glass” airport like Kansai was certainly an issue. This is being addressed.

On top of that, we also see the skyscraper of the famous Star Gate Hotel at the other end of the Sky Gate Bridge R.