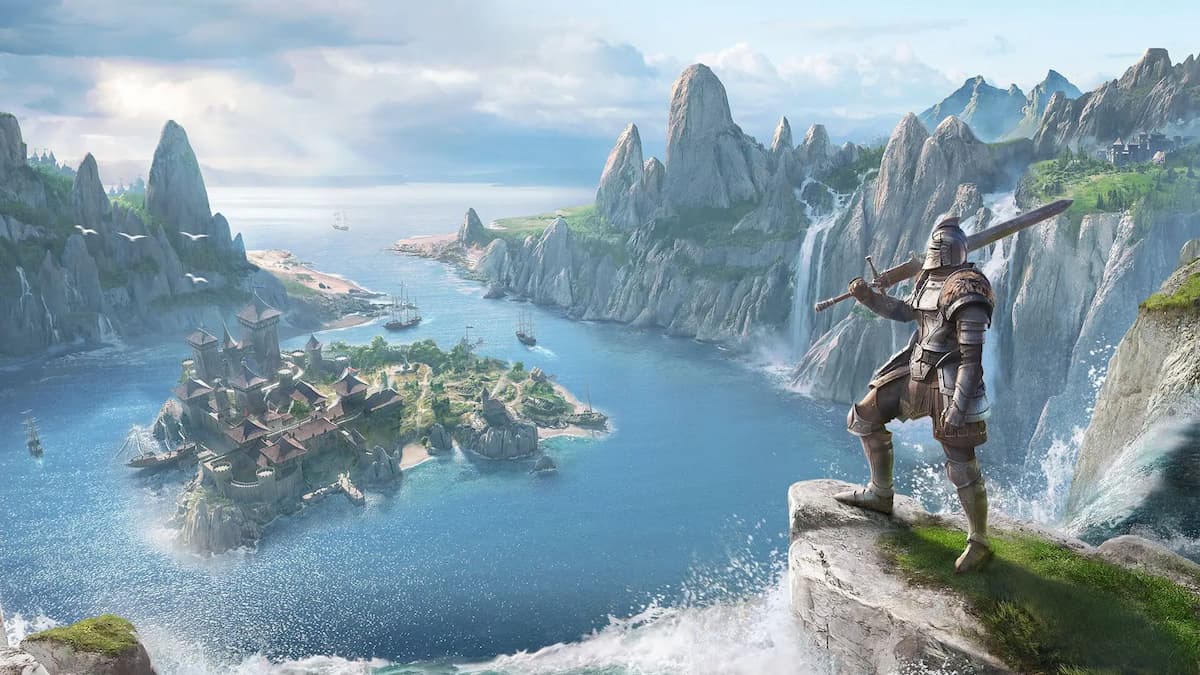 As a complete newcomer to Elder Scrolls Online, the biggest thing that I appreciated was the fact that I didn’t need to have played through any of ESO’s previous expansions and get to the right gear level to jump into High Isle. Unlike my main MMO, FFXIV, which demands quite a bit of time and dedication if you want to keep up with the main story, Elder Scrolls Online is a kindly friend who’s just glad you’re here. And what a nice, warm welcome that is for someone who’s always been intrigued by ESO but never stepped into its vast world.

High Isle is the main ESO story of this year, and this time, Bethesda aims to flesh out the Breton race and give players the chance to explore a beautiful Mediterranean Sea-inspired archipelago full of little secrets and delights to uncover. During my time with a preview build of the game, I was given access to a decked out, max level character so that I could just explore the world freely. By the time I hit the 30-hour mark, I was already looking forward to starting over from scratch to see everything else this game had to offer.

I’d spent most of my time just wandering through the Systres Archipelago, which is home to countless small islands, large towering cliffs, and lovely high fantasy castles. The moment I got dropped into the game, my senses were immediately assaulted with quest markers, talkative NPCs with overlapping dialogue, and so many things to loot.

This might sound like a mark against the game, but I actually found it oddly comforting. As someone who treated Skyrim largely as a huge checklist of things to do, I appreciated that sense of familiarity as I wandered from NPC to NPC, listening to their little stories, and agreeing to take on whatever banal quest they had for me. Before I knew it, I was raking in gold and experience, and getting swept up in political conspiracies and conflicts between minor factions.

Unlike in MMOs such as FFXIV or Lost Ark, where the bulk of the content is centered around dungeons and world events, Elder Scrolls Online seems content to let the player revel in the comforting mundanity of everyday chores and side quests. It’s a very refreshing change of pace that almost made me forget I was playing an MMO. The quest structures and the setting made High Isle feel like a classic single-player Elder Scrolls experience, and for newcomers who are looking to dip their toes into this massive version of Tamriel, that might be just what they need.

That’s not to say that High Isle doesn’t feature any of those typical MMO-isms either; Volcanic Vents have been introduced as a new world event you can take on in the game, where you’re tasked with shutting down dangerous volcanic fissures that have popped up all over the archipelago by defeating the deadly creatures that lurk there.

High Isle also introduces two new companions that can accompany you on your journey: Isobel and Ember. The former is a Breton knight who’s a little more stoic in nature, while the latter is a bubbly Khajit who ropes you into a silly adventure of trying to correct her mistakes and turning humans back into animals before anyone else finds out. Her questline involves breaking into a sorcerer’s tower to steal their notes, and running around a meadow chasing down bleating humans who are actually cows and sheep so we can turn them back into their original forms. It’s wild.

Ember is definitely the highlight here, as she shows off a sense of humor and level of goofiness I’ve never quite seen in the single-player Elder Scrolls games, and being able to take her with me on my adventures is definitely something I’m looking forward to in the final build. Ember is a sorcerer while Isobel is a more standard knight who specializes in melee attacks, and you can’t really go wrong with either of them.

For all the newcomers out there who are looking to jump in, it is worth noting that the combat plays exactly like you’d expect from your typical Elder Scrolls game too. That could be a good or a bad thing, depending on how you feel about the combat. It’s still pretty clunky and pretty basic, though your character does learn new skills (all of which have cooldown timers, of course) as they level up to help mix things up and make it feel more like an MMO.

The big difference is that enemies are also tankier in this game, and their wind-up moves are telegraphed by red circles on the ground, indicating that you have to dodge or move out of the way. The combat sequences can feel a bit more drawn out as a result, which is something that doesn’t always gel well with the laidback nature of the game’s quest design, where you’re intended to flit from one place to another while knocking out your numerous side quests.

For better or for worse, Elder Scrolls Online: High Isle is essentially a classic Elder Scrolls game that just features a much larger world for you to explore, alongside other players looking to kill time questing as well. You can jump into any of the various story chapters that have already been released and enjoy them in any order, but if you’ve always been drawn to the Breton race, High Isle is a fantastic place to start once the expansion officially drops in June.