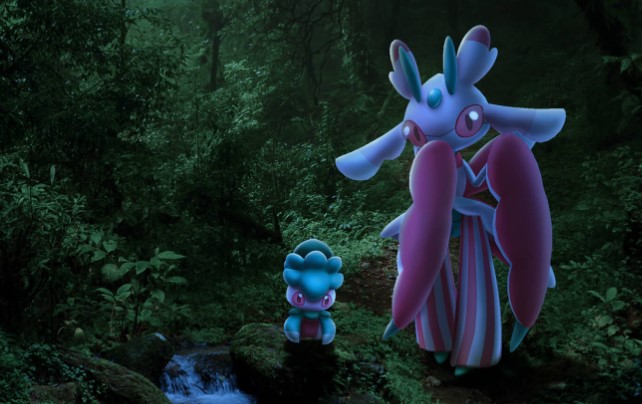 Earlier today on the Pokemon GO official site, it was announced that three more ‘mons from the Alola region will be making their debuts in the mobile AR game as a part of the upcoming Lush Jungle event.

Fomantis, Lurantis, and Tapu Lele will be appearing in Pokemon GO for the first time during the event which takes place between Tuesday, March 22, at 10 AM and Tuesday, March 29, at 8 PM local time. But that’s not all that’s new during the Lush Jungle event.

Shiny hunters should be on the lookout during the weekend of this event between Saturday, March 26, at 10 AM, and Sunday, March 27, at 8 PM local time. During this two-day window of time, shiny Cottonee will be appearing in the wild for the first time in Pokemon GO.

As for the other Pokemon you’ll be able to encounter in the wild during this event, the rest will mainly consist of Grass- and Bug-types as well as other creatures that you might find in jungles. The full list is down below (* indicates potential shiny):

Next up are the raids that will be live during the Lush Jungle event. Everything here has been seen before in Pokemon GO with the exception of the debuting Tapu Lele:

There’s also a large bunch of Pokemon that you’ll be able to catch by completing special Field Research tasks related to the Lush Jungle event. These include Fomantis, Cottonee, and more:

Finally, there will be a pair of research tasks to play during the Lush Jungle event in Pokemon GO. The one you’ll want to focus on immediately is the Timed Research that features encounters with Fomantis since the tasks will likely only be available during the event.

There will also be a Special Research story that goes live the same day as the event. This set of tasks will focus on Akala Island from the Alola region.

If you would like to check out the official release about the debut of Fomantis, Lurantis, and Tapu Lele in the Lush Jungle event for Pokemon GO, you can find the information right here.