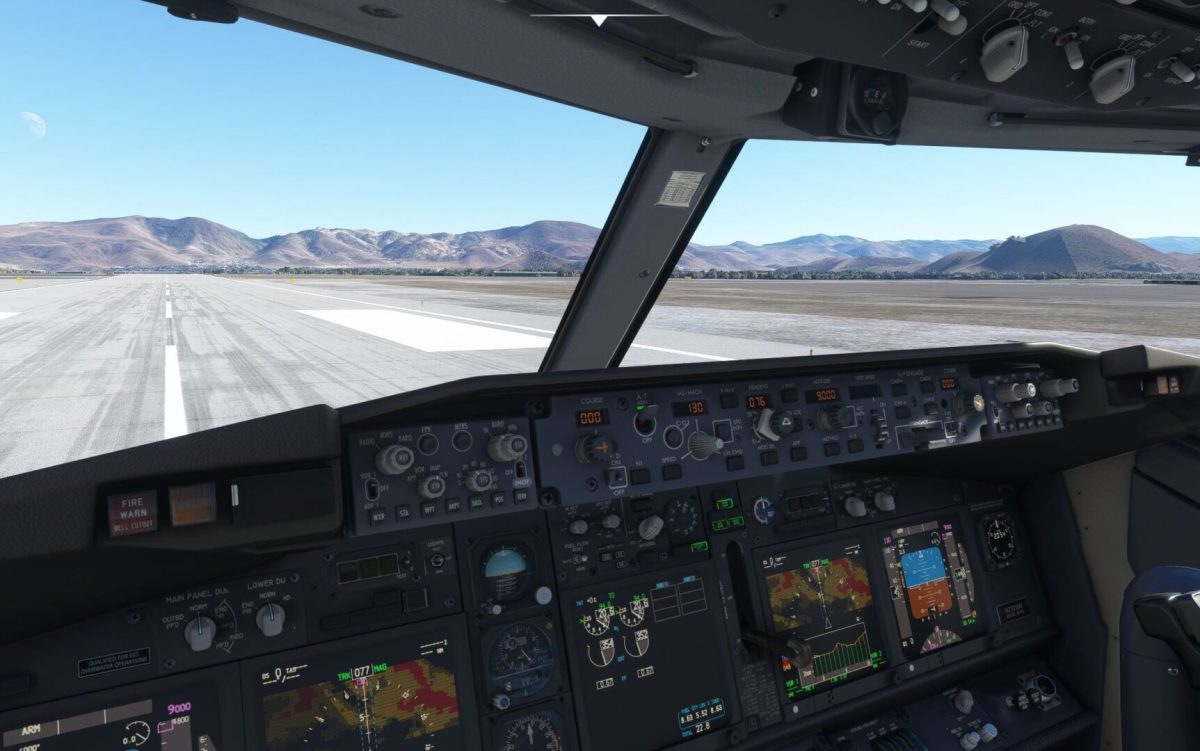 Third-party developers released new assets and details about upcoming aircraft and airports for Microsoft Flight Simulator, on top of a new release.

First of all, we get a new development update about the Boeing 737 in development at PMDG from CEO Robert Randazzo, alongside an ultra-detailed work-in-progress screenshot of the flight deck.

“Not content to rest on our laurels, we have been hard at work through the holiday period, with a massive amount of refinement to the 737 cockpit. The image contained here will give you a bit of an idea what we are up to, as we continue to put focus on graphic quality, model refinement, coloration, lighting and really fine-point detail work.

I grabbed this screen (rather unceremoniously) using windows snipping tool… so it isn’t perhaps the most well formatted image, but I think it gives you a good sense of how the detail work is shaping up. Nearly all of the knobs and annunciators have been rebuilt (again!) in order to bring out even more detail, adding to the sense of immersion.

DANGER: This shot is of an in-development airplane, so you may notice layout issues, etc. These are to be expected and will be swept up/cleaned up as a normal part of development.

For my test flight tonight, you can see that I am basing out of Reno, and using runway 7, not because the wind favors it very often but because the terrain past the end of the runway is highly annoying to EGPWS and the various suppression logical processes it contains. There is no better way to test that than to point the airplane at the high-desert ridges while hoping your performance data is accurate.

Speaking of EGPWS, you can see the data display function is present and functional, as well as the profile view of the VSD. The profile view is still being tuned so that the logic redraw call adjusts for airport elevation and I didn’t have time to input a departure route so you can see all of the symbology, but you can clearly see the terrain profile out ahead of the airplane. The airplane’s vector will easily allow you to see your climb performance vs. terrain which is useful in a place like Reno, especially at night or during inclement weather.

Oh and on the topic of EGPWS: I’ve seen a few folks refer to it as “terrain radar.” That is usually where I make a clucking noise of disapproval. Now… It isn’t. Radar. And I would hate for any of you to be perceived as un-serious, or ill-informed when you reach the Flying Club Bar and Grille post flight, so follow along with me here: This is a data derived display of terrain information. It comes from the EGPWS unit in the E&E bay of the airplane and does not rely upon radar for mapping. After all- radar can barely penetrate harsh rain showers, so it definitely cannot pass through terrain to show you what is on the other side… So now we don’t call the propeller a “spinny thing in the front” so don’t go calling this thing “terrain radar.” Unless you are flying something that launches missiles- in which case, yes- you may actually have “terrain radar.”

(Since someone will want to play “gotcha”: EGPWS uses a couple of radar transceivers located on the belly of the airplane, but those are for height measurement and do not derive the details of the terrain that gets displayed. Apparently here in the USA those transceivers are also useful for receiving bogus signals from 5G antenna installations, thus creating a huge kerfluffle between FAA and the mobile carriers… but that stuff is WAY above my paygrade so lets just stick to using the terrain radar thingie to help us from smashing the spinny thing into the granite things out in front…)

The astute will also note that I have my 737-700 configured as an early serial number that uses both the Honeywell mode control panel and the full analog suite of standby gauges. The Honeywell MCP is interesting in that it has very distinct knob shapes, to facilitate being able to make changes without looking at the knob, I suppose. The IAS/Mach knob in particular is an odd shape to grab with your fingers, which leads to some crude jokes and occasional profanity if you are in a rush to keep up with ATC’s speed, heading and altitude change all in one go. You will also notice the amount of detail that has gone into the face of the MCP, especially the knobs and buttons. Even down to the odd paint application on the course and altitude knobs. Up close, these things look like they got painted during Honeywell’s “bring your child to work day” as the finish is a bit odd and the identifying shapes embedded in the knob caps are actually painted with a brush, leading to normal human imperfections.

It is strange… but this is precisely what it looks like- and it adds tremendous realism to the panel within MSFS.

The analog standby gauges adds the pleasing sound of the standby altimeter vibrometer, which always reminds me of my early airline flying days when most airplanes still carried such a thing. The incessant clacking would drive you nuts during a cockpit brief but eventually you learned how to tune it out or how to depower it. (Disclaimer: I would never. Nor do I know anyone who would ever. )

Overall things are moving right along and we are getting into some areas where we are trying to clean up sim-differences that might prove annoying to users and investing some engineering time in trying to clean them up. One example of such a thing is that the standard Boeing landing gear switch used here is a three position affair, and as such you will want to move the switch to the OFF position after takeoff. MSFS however has decided that it would be fun to continually send your hardware controller position data in real time, so if you move the switch to the OFF position but you have a gear switch on your hardware, it creates all manner of mayhem.

In other areas of the 737, we are quite rapidly whittling away at the list of things we have outstanding. I anticipate that we will begin integrating the latest Navigraph API for chart display within the EFB this week, which will be good as it has long been an item we have said “we’ll get to that right at the end.” I have begun shooting video for compilation into a few previews, and the process of mapping out the tutorial videos has begun as well… Stay tuned for more on that.”

Next, is the announcement of an airport that likely needs no introduction and is sorely needed in Microsoft Flight Simulator, Ted Stevens Anchorage International Airport (PANC) in Alaska, US.

It’s being worked on by VREF Simulations and below you can see some work-in-progress images.

Another announcement comes from Impulse Simulations, which shared its roadmap for 2022 after Coffs Harbour (YCFS). The developer plans to work on Darwin International Airport (YPDN) and Bendigo Airport (YBDG), bringing even more scenery to the already rich Australian scene.

The last reveal comes from developer Jeroen Doorman, who will release Heide–Büsum Airport in Germany with Aerosoft (EDXB).

Below you can find a trailer.

On the front of releases, France VFR had a big one today, with its France North-West package. It includes lots of airports in the region, on top of additional scenery.

It can be purchased on Orbx Direct or SimMarket for approximately $38. Here’s a list of content and plenty of images.