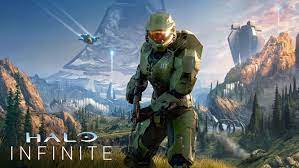 Today, in a new official blog post, detailing Halo Infinite’s ‘journey’ to PC, Xbox revealed that raytracing support will be coming to the PC version of Halo Infinite, but will be patched in later. Noah Benesch, the Product Marketing Manager at Xbox called it a post-launch priority.

The post focuses on the partnership between AMD and Xbox. If it’s you’re a big fan of AMD and would enjoy a product marketing manager at Xbox gushing over how great AMD is, then you might find the entire post interesting. Otherwise, the most interesting bit is definitely the news about raytracing, for those that are looking forward to having Halo Infinite look as good as it possibly can on PC.

Most excitingly though, we’re looking forward to working closely with AMD to bring raytracing to Halo Infinite. Raytracing is one our top development priorities post-launch and look forward to sharing more soon.

In addition, AMD and Xbox are teaming for a bonus to anyone that purchases “select AMD Radeon and AMD Ryzen boxed products at participating retailers and e-tailers”: a free month of Xbox Game Pass, presumably to play Halo Infinite with.

Halo Infinite will release on Dec. 8 on Xbox and PC.