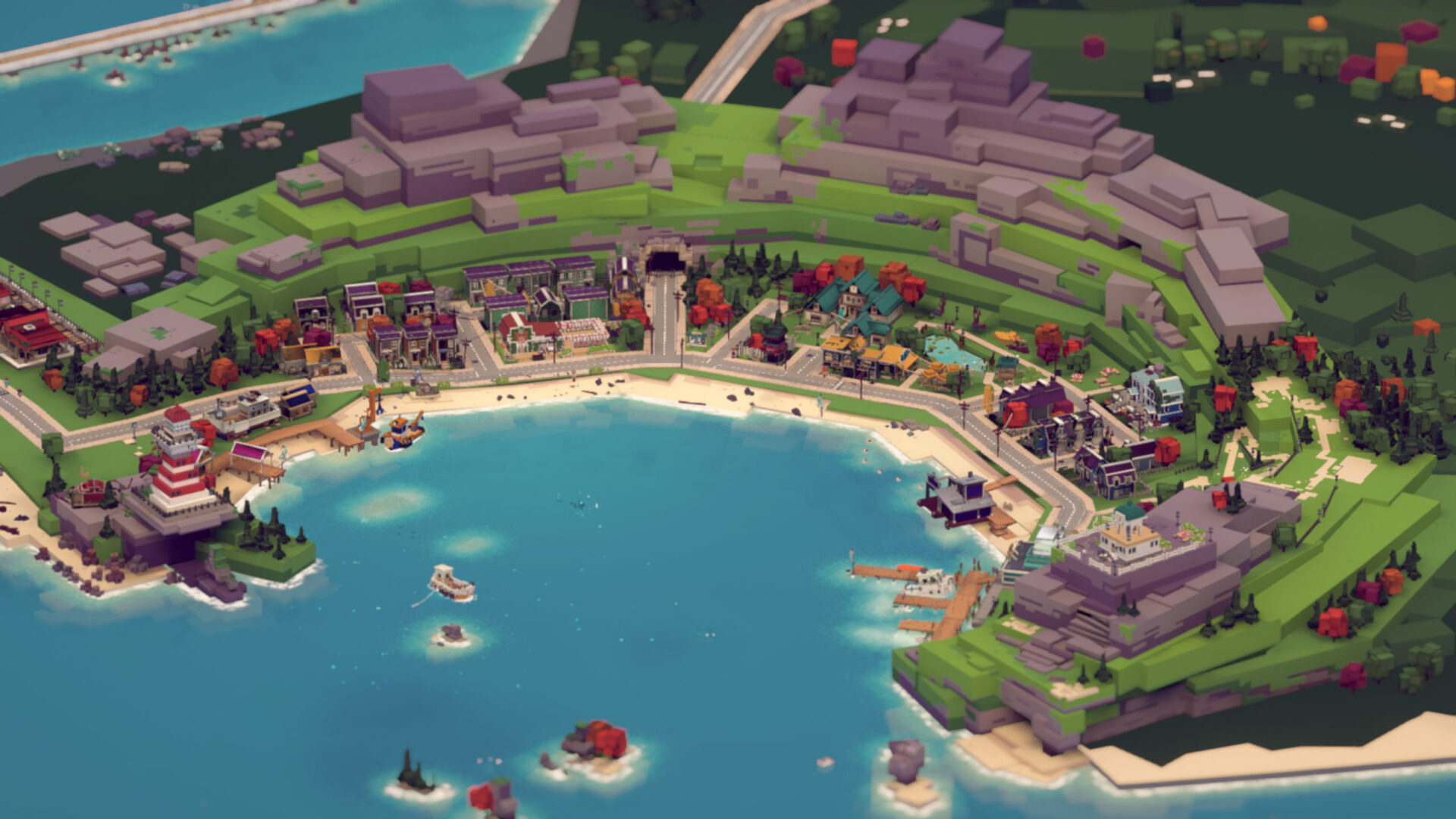 Moonglow Bay had me from the moment I laid eyes on its gorgeous voxel art visuals, and the promise of a slice-of-life fishing sim and all the trivial tasks that come part and parcel of that was a gameplay loop I couldn’t wait to engage with. Fishing, cooking, earning money, helping renovate a rather tired town — Sign me up, I thought! The reality of playing the game, though, wasn’t quite as compelling as I had hoped. And now after now having now spent over 15 hours soaking up the sights and sounds of Moonglow Bay, I’m not sure all the reeling was quite worth the catch.

Moonglow Bay’s story premise is simple enough. After a horrible accident, your partner has been killed and you’re left in the rundown town of Moonglow Bay, determined to have another go at making a living fishing and selling your produce as your late beloved had always wanted you to. A town once known for its fishing industry is now home to citizens scared of setting sail after having heard folk tales of monsters sending the unsuspected to a watery death. So, surprise surprise, it’s down to you to kickstart the industry by catching the freshest fish the bay has to offer.

There’s a lot of heart and charm that has been packed into its story and dialog, and a lot of things I love Moonglow Bay for as a result. Its core themes of friendship, community, and essentially, being environmentally friendly are a heartwarming combo and make for a suitably feel-good atmosphere throughout, regardless of the turbulent tides that your character — and the rest of Moonglow Bay — face.

Given this is a slice-of-life fishing sim, then, you’d expect the fishing mechanics to have a half-decent level of complexity to it. Unfortunately, the act of fishing can be distilled down to casting your rod out, yanking it a few times to reel in your catch a little quicker, and then rinsing and repeating. There are different baits and lure types here to help you attract different kinds of fish, but the core mechanic remains the same and is too simple to not feel a little tired by the end. The likes of ice fishing mix this premise up a little bit later on in the story, but it’s still very much a basic mini-game that doesn’t provide the kind of depth I’d expect from a game based primarily around fishing.

Similarly, the act of cooking different dishes distills down to various combinations of different mini-games. Wash, chop, fillet, bake, fry, and so on. It’s functional and is initially gratifying enough to engage with, but it’s not long before it becomes tedious — particularly so, given this is the primary means of making money in the game and you’re doing a heck of a lot of it.

This lack of depth permeates through much of the rest of the game, too. Moonglow Bay has residents that you’ll find standing around on the beaches, in the streets, or working at one of the few stores. At first, they’ll tell you intriguing tales of different species of fish out at sea, and it’s all quite whimsical and mysterious. Listening to fact-lite descriptions that border on ridiculous, only to find the species they were describing was rather tame in comparison.

However, after about 5 hours in, I’d seemingly exhausted the need to speak to the locals. Many of them would simply turn me away, informing me now wasn’t a good time to talk, or that they’d simply told me everything they had to. It felt a little too skin-deep. This is a slice-of-life sim, and before I even finished the story, many of the characters became nothing more than additional decoration to make Moonglow Bay feel like less of a ghost town than it really is.

You’ll still be able to interact with them somewhat passively via the town’s Bulletin Board where you can pick up requests to earn Shells (the game’s currency) to spend on upgrades for your ship, ingredients for cooking, recipes, or primarily on renovating the different buildings around town. These interactions are little more than a line or two of dialogue, though and the task itself is often rather basic, too. Catch a certain fish, bring them a specific type of food. It feels a little tired before long.

In renovating the town, you increase the sale price of your goods, but you also make Moonglow Bay a more aesthetically pleasing place to be. No more rundown buildings and bags of trash littering the street. Rows of trees bring life to the seaside and new licks of paint and general DIY help tidy up tired houses. There’s a feel-good factor to this gameplay loop. Investing your hard-earned cash on something that benefits everyone. Even if they don’t offer a ton of revelations gameplay-wise.

All that being said, the voxel art and soundtrack do make just pottering around Moonglow Bay even more of a cozy delight. The developers have clearly focused on making this a relaxing experience, and that may explain why everything feels so simplistic. If you’re here to just catch fish and take a break from whatever violent video game you’re playing, or just something chilled after a hard day’s work, there really are few games that are quite as enjoyable to cuddle up with a coffee and lose yourself in. Unfortunately, though there are also times where the game just doesn’t quite explain things well enough, that it works against this core vision for life in Moonglow.

In one example, I had to meet the mayor outside the town hall, but the game doesn’t tell you that you need to either have completed a quest or go there at a certain time in order for it to trigger. I’m still not entirely sure what it was that prevented me from completing the quest. In another instance, I needed to give the aforementioned mayor an item to complete a request from the board, but he’ll only come out of the town hall at very brief moments throughout the day and you can’t go inside (until much later in the game), but you’re not told this. This means you’re either standing around waiting all day, or you just have to luckily catch him when he’s outside.

Fortunately, Moonglow Bay does provide you with plenty of other things to be doing to fill your time each day, but that makes these niggling issues all the more frustrating when you’re trying to tick so many things off each day before everyone goes to sleep.

There are many other instances that highlight the rather vague nature of Moonglow Bay. Its second monster encounter (and many of them, actually) is a little unclear in what you’re supposed to do to help them, and while that’s part of the fun, there’s very little feedback when you do something right or wrong to steer you in the right direction. Your map marks your objectives, but simply with ‘Objective,’ making it annoyingly unclear which of the many quests you’ll automatically begin trackings. It forces you to dive into menus to untrack them, which in turn yanks you out of the immersion.

The moment that took the biscuit though was when I was tasked with catching the Jungle King in the main questline. Despite the game seemingly being insistent — both in its Help section and in dialogue with characters — that fishing rods don’t determine what fish you can catch, it took me over 50 attempts with the correct bait and lure in the right location to catch it. 40 of which were with the game’s Strong rod which has the longest line and is easiest to handle. The final 10 were with the Poise rod which apparently makes your strikes very effective but trickier to perform. Out of 40 attempts, I couldn’t catch the Jungle King, which took over an hour. In the final 10 with the Poise Rod, it appeared.

I’m still not 100% whether I just had awful luck, or rods actually do make a difference, as the in-game Fishing journal does list the various species as either Strong, Agile, Poise and Balanced — the four different rod types — but only after you’ve caught them, so you’d never know. Just an extra bit of clarity could have saved me from these frustrations, either that or far better luck.

Ultimately, Moonglow Bay feels like a great premise, but one that needed a little longer in the oven to truly realize its full potential. It’s got a lot of heart and charm, and I’m still enjoying renovating parts of my town and collecting the last few fish that have eluded me out on the water. Its core gameplay loop — fish, cook, sell, renovate — is strong, but too often I felt a little underwhelmed at how surface-deep many of its systems were. Its fishing mechanic feels like the biggest one to falter here, but its monster encounters never provided the level of spectacle I had expected, either.

Despite all of this, I still found myself sinking hours at a time into the charming world of Moonglow without even realizing it. Its voxel art visuals are beautiful and the soundtrack is suitably chill. Moonglow Bay has been developed by a truly passionate team, one with so many great ideas that, in trying to implement them all, perhaps haven’t had the time or experience to flesh them out with the depth they truly deserve. Still, if the idea of saving a town through fishing sounds like your cup of tea, Moonglow Bay is worth checking out. Just be prepared for a rather simplistic ride.