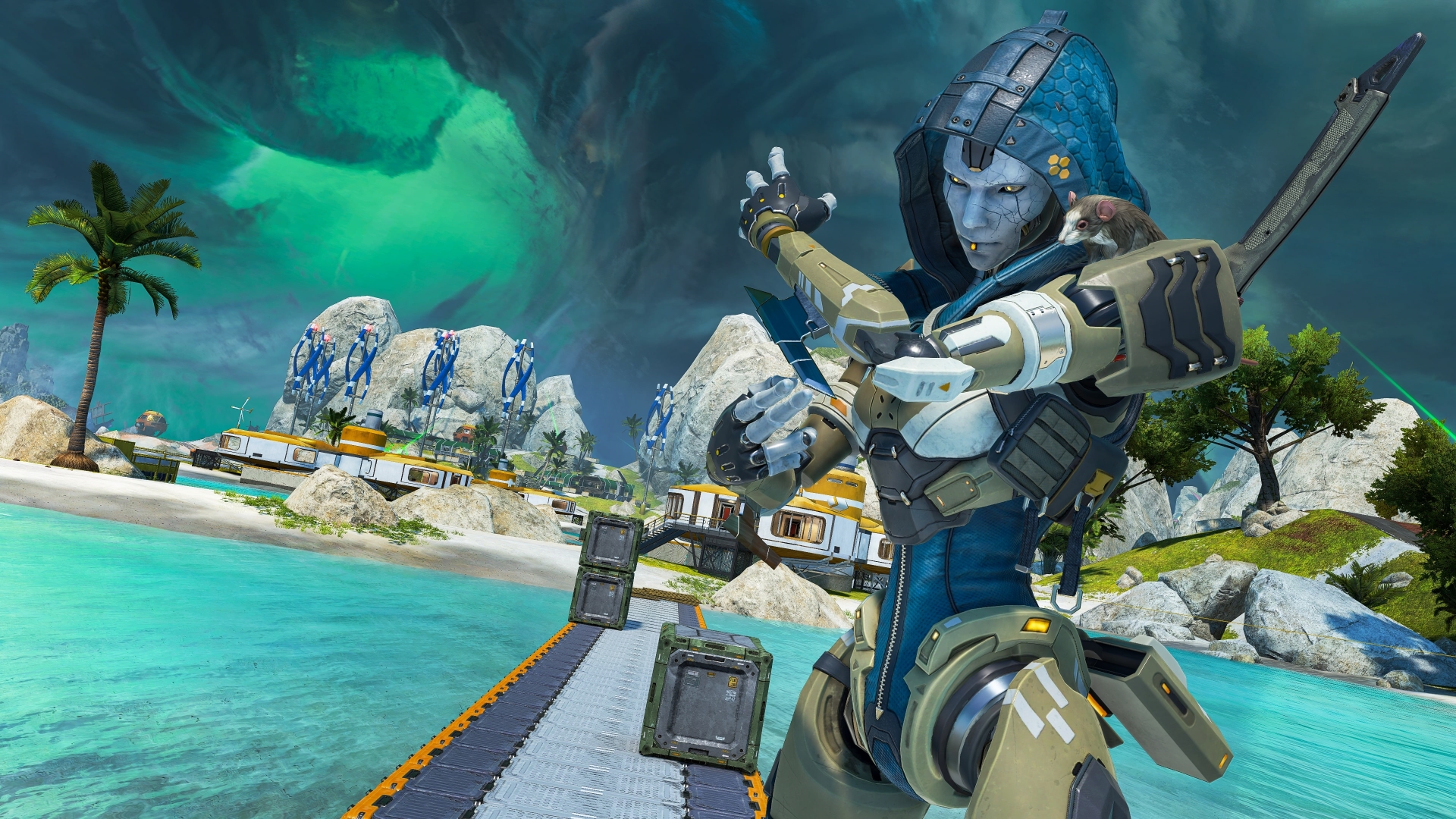 Apex Legends Season 11: Escape is right around the corner and it’s adding another Titanfall gun, a huge tropical map, a ruthless new Legend, and more. I recently got the opportunity to attend a hands-on preview event for the new season, so here are my first impressions of what’s being added to the game on Nov. 2.

The last time a new map got added was back in Season 7: Ascension, and this new one, Storm Point, will shake up the game in significant ways just like Olympus did. Storm Point is presented as a tropical getaway at first, but of course, that wouldn’t be nearly as entertaining as what really awaits the Legends in this hostile new environment.

This huge island is the largest map to date, as it’s 15% larger than World’s Edge. And with all that space comes aggressive wildlife, new map traversal options, 17 notable POIs, and the return of Tridents to help get from place to place as efficiently as possible.

One of the most interesting things about Storm Point is how varied the environments are. It’s all cohesive even though you could be on the beach one minute, then a dense jungle or mountainside the next. And if you’re not careful, you’ll end up in a spider or prowler nest.

Prowlers will attack if you venture too far into their territory, while spiders only go after you when their egg sacs are shot. Either way, hunting the wildlife can actually be beneficial, as they provide ammo and attachments for the gun used to kill them, as well as Materials and a very small amount of shield points.

There are also IMC bases scattered throughout the map to break up all the nature with long zip lines (including the longest one seen on any map to date), elevated platforms, and the new Gravity Cannons.

These cannons replace Redeploy Balloons in a way since there aren’t any on Storm Point. Gravity Cannons launch players across long distances while still giving them full access to all weapons and abilities to attack or avoid enemies in landing zones if necessary. They’re extremely loud though, so it can be a bit of a risk if stealth or secrecy is your game plan.

If a cautionary approach is being thrown out the window, Tridents are once again an option. Storm Point was made with vehicles in mind, so the layout welcomes their use, much like Olympus. The difference here is that Storm Point is an island surrounded by water that can be crossed.

Tridents are quick and efficient vehicles when it comes to repositioning thanks to their ability to hover over water and, essentially, drive around the edges of the island to completely avoid unnecessary conflict on land. They’re still large moving targets, but when trying to escape a terrible situation with water nearby, they can be your best option.

When you have to stand and fight, the new C.A.R. SMG is a great option. Titanfall 2 fans will remember it being a popular choice in that game, and it looks like it’ll be used often in Apex Legends Season 11 as well. That’s thanks to Respawn making the gun more unique here.

In Apex, the C.A.R. can hold/use both light and heavy ammo types, along with the corresponding attachments. This means that the SMG can use either light or heavy magazines while switching between both ammo types at the press of a button. For example, a purple light mag will still allow the C.A.R. to use plenty of heavy rounds.

This makes it one of the best weapons to pick up right out of the gate when supplies can be hard to find. You also won’t need to drop your gun if teammates are using the same ammo type — simply switch ammo types while keeping the C.A.R. in hand.

The SMG also fires faster than the Volt with slightly more recoil. If you can get used to the recoil pattern, this weapon is one that offers a bit of extra versatility. And if you’re someone who loves the Mastiff or 30-30 Repeater, the new Dual Shell hop-up is a nice addition, as it allows two rounds to be reloaded at once, which doubles reload speed.

Most players in the preview playtest wanted to get some hands-on time with the new Legend, Ash, and I was no different. Based on what I experienced, she shares similarities with Wraith but is a far more aggressive pick when it comes to seeking out other squads to engage with.

The more offensive gameplay style stems from her Passive Ability, which allows Ash to see Deathboxes on the map, then interact with one to locate the team who killed the Deathbox owner. This can also be used to avoid fights, but the rest of her kit doesn’t exactly scream “defensive.”

Her Tactical is an Arc Snare trap that can be stuck to the ground, walls, doors, etc. It tethers enemies when they get too close to it, electrocuting them when they attempt to escape its radius. See an Octane about to make a quick getaway? Tether him. A Valkyrie about to fly away to avoid confrontation? Tether her.

The timing on the Arc Snare throw takes a bit to get used to since it moves slowly in the air, but this Tactical is the right tool for the job against agile, hard-to-catch Legends.

Lastly, Ash’s Ultimate is where the Wraith comparisons will appear. The ability rips open a one-way portal to a location within her line of sight. This means that it might have less versatility than Wraith’s Dimensional Rift, but it can be used to flank, reposition, and attack relatively quickly since Ash warps automatically. Also, Ash’s portal is active for far less time than Wraith’s, so be sure your warp destination is a safe one.

Apex Legends Season 11 brings the biggest changes to the battle royale mode since Season 7 in terms of new content, thanks to its brand-new map and dual ammo type gun.

I’m not the best Apex player around, but I’m looking forward to frantically fighting for my life on Storm Point when the update goes live on Nov. 2. Be sure to gather all the info you can before experiencing the upcoming content in Escape next month.