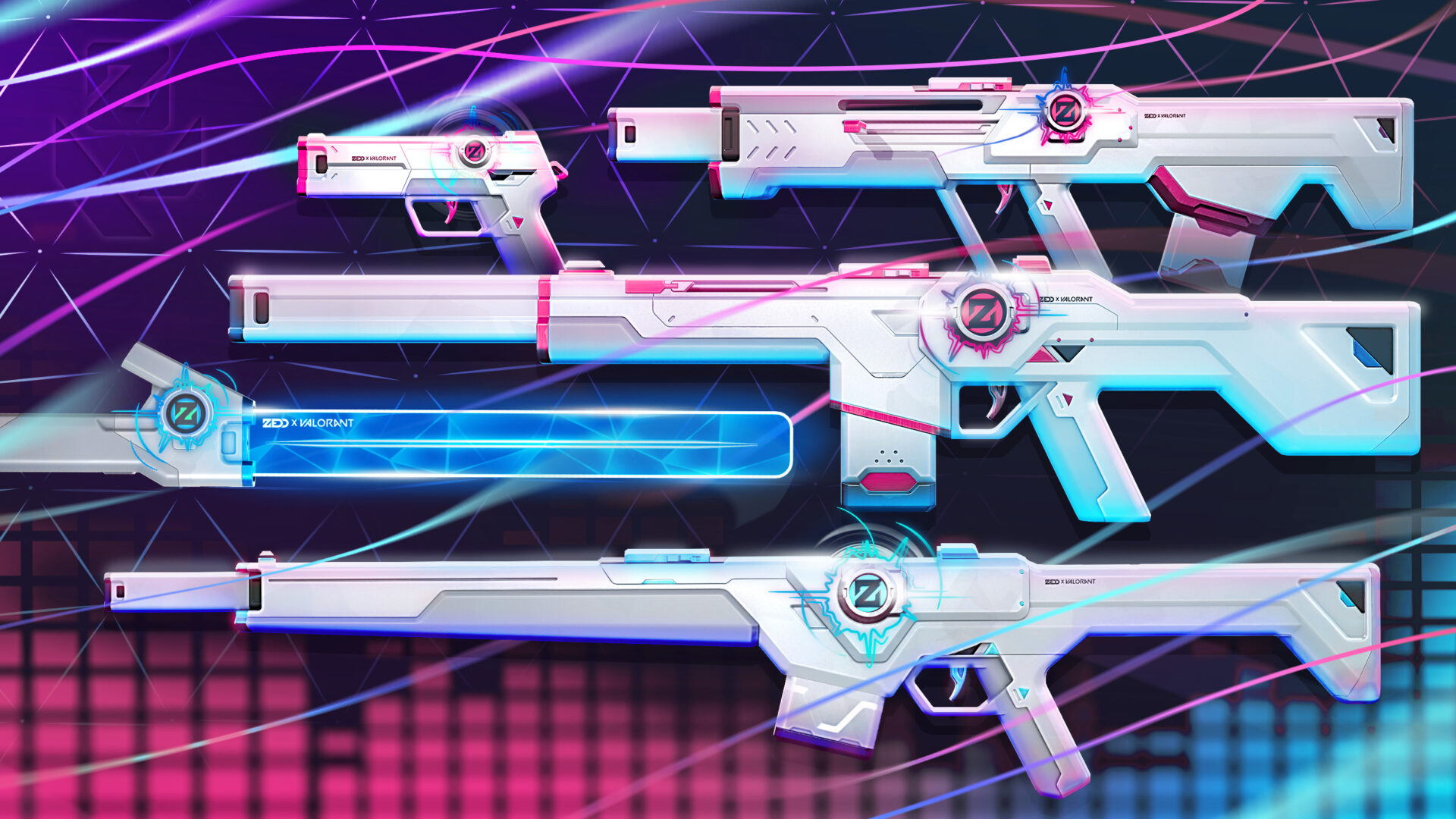 Valorant’s latest skin bundle is the result of a collaboration with German musician, Zedd, but you don’t have to be a fan of the DJ’s music to appreciate just how cool its futuristic design is. The new bundle not only looks super fresh but there’s also a funky musical beat that accompanies its finisher. The bundle releases tomorrow, Sept. 8.

It certainly isn’t cheap, though. At 10,700 VP, it’s the exclusive tier price range, right up there with Elderflame as the most expensive in the game. Here’s an overview of everything it features:

As usual, weapon skins can be upgraded by spending Radianite points. There are four tiers, and the Spectrum bundle has some unique features such as changing color when moving.

In a press release, Sean Marino, Art Lead on Valorant at Riot Games, spoke of the design team’s goals when designing Spectrum:

“Zedd was very interested in collaborating with us on a skin line because he’s a huge fan of Valorant. He was playing the game for many months before our team met him, so it was cool that he approached us as a Valorant player, not as Zedd the artist. When we first started talking about ideas, something we established really early on with him was that we wanted to make a skin that would be broadly appealing and awesome whether or not you were familiar with Zedd’s music or brand. This means that players who like sci-fi and sound-heavy skins would love this skin, rather than this just being a skin that only Zedd fans would enjoy.“

“The Spectrum skin is the most ambitious and complex skin line we’ve ever made, arguably more complex than the Elderflame dragon. And Spectrum has the most new features of any skin out there. We often say that every skin has to have an “oh shit” moment, but I feel like this skin has several big “oh shit” moments. For example, the skin’s VFX and accent colors change continuously as you move through the map. Likewise, the Finisher color changes depending on where it spawns. And the Finisher is different if the bomb is planted and needs to be defused!

Not only did we add a unique set of sounds to the inspect (we named the inspect sound that plays “SEQUENCE”), those sounds are different on each weapon! So you can swap between your Phantom, Classic, and melee back-to-back to enjoy a different version of SEQUENCE with each weapon! This may not be a feature exactly, but this skin line was also a very unique collaboration because Zedd contributed so much work to the skin’s sounds–not just the inspect sound, but the firing sounds, melee swipes (which feel amazingly powerful and satisfying), spray sounds, and the Finisher sounds! I said this to Zedd recently: he’s officially a video game developer now!“

Here’s a quick breakdown of the Spectrum bundle’s key

Here’s a look at the Spectrum skin bundle in-game:

And here’s a glimpse of the finisher in action:

The Spectrum bundle arrives tomorrow along with the game’s latest patch, which kicks off Act 2 of Episode 3. Among many other changes and the launch of a new map, it is expected to change the competitive rank distribution for the better.