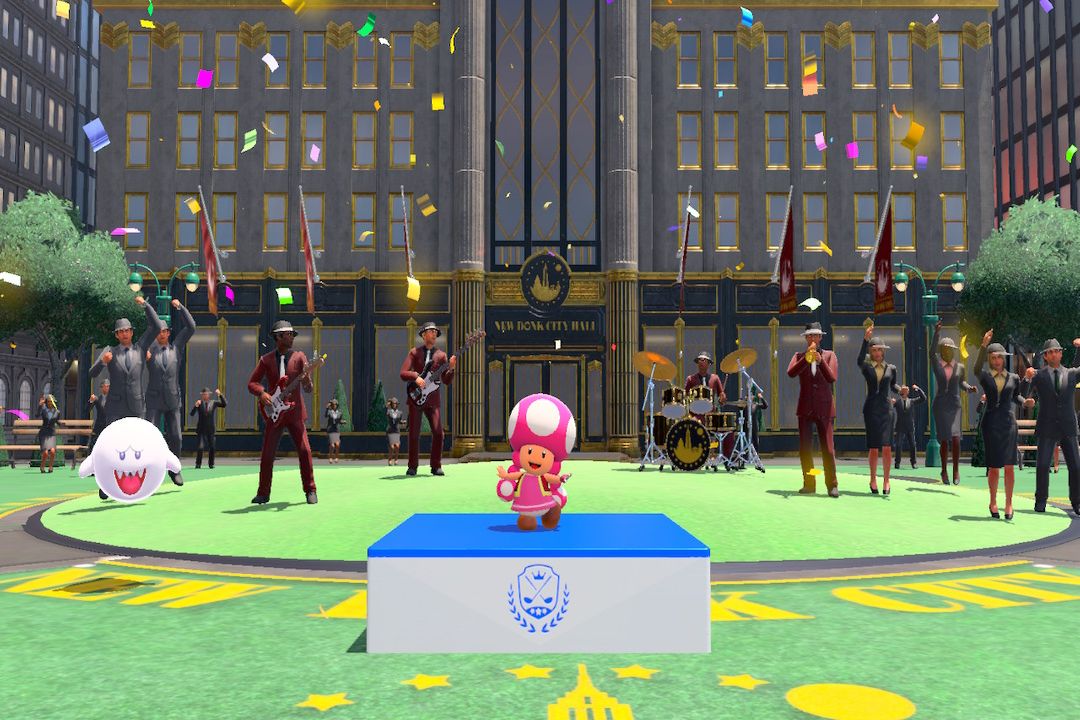 Yesterday, Nintendo released the first substantial update for Mario Golf: Super Rush. In this brand-new Super Rush update is a new course, a new playable character, a new mode, and several improvements to make for a more enjoyable experience out on the Mushroom Kingdom links.

Most notably is the arrival of an all-new course, New Donk City from Super Mario Odyssey fame. It looks like the map was lifted directly from Odyssey, looking oh-so-familiar in all the best ways. This particular 18-hole course is a special one because like Mario Golf: Toadstool Tour’s Congo Canopy and Mario Golf: World Tour’s Sky Island, New Donk City is entirely comprised of Par 3 holes.

Essentially, New Donk City is 36 all-new holes, because there is an amateur tee and a pro tee choice players can choose at the start of their rounds. Both feature different tee and green locations.

Amateur tees feature easy layups to the greens due to their close proximities, as well as almost entirely flat greens, save for an occasional slope. It’s nothing too taxing for most golfers, as it’s a nice, gentle way to ease players into the course.

Meanwhile, if New Donk City’s amateur tees gently eases golfers into its course, then the pro tees pretty much take players and prepare to curb stomp them on one of the city’s many streets. Greens are in precarious locations, feature multiple undulations and challenging slopes, and occasionally you won’t have a direct shot on the hole at all.

In these cases, and in a cool spin on the whole game of golf, you’ll have to ricochet your shots off the sides of buildings and aim for the green that way. It certainly takes some getting used to in order to learn how ricocheted shots work, but once you do, it becomes insanely enjoyable to pull off trick shots that actually play in your favor.

Whether playing on amateur or pro tees, New Donk City delivers an exciting round of golf. It’s such a cool and inventive course. You start off street side, but by the back nine, you’re driving your ball off rooftops where the elevation changes are enormous, as well as having your ball fly precariously over gigantic pits obviously serving as penalty areas.

Speaking of precarious things, if there’s one downside to New Donk City, it’s that there are a lot of opportunities for your ball to land in some truly sticking situations. I’m talking about situations where your ball is caught in a gutter or directly behind a curb, forcing you to play ultra defensively. Sometimes, then, the only path forward is to play for bogey.

Things get even wilder during Speed Golf. Up to four players rushing along rooftops, through the city streets below where speed-increasing boost pads call their home, along girders, and taking trampolines that launch them across gaps amounts to some massive and enjoyable hijinks.

Not just a new course was added in this first sizable Super Rush update, which honestly would have been exciting enough, but a new character has been included as well: Toadette. It makes sense she’s the first addition to the roster, as her model was fully complete and shown in the game’s Golf Adventure mode. Might we see Birdo next, then?

Toadette definitely stands as one of the weaker characters on the Super Rush roster, but she certainly makes for her lack of power with a ton of control when aiming and hitting her shots. Her Special Shot has her bringing out a pickaxe, a nod to Captain Toad: Treasure Tracker, and striking the ball in a spectacular fashion.

Aside from a new course and character, also added to this Mario Golf: Super Rush update is Ranked Play, offering not only a much-needed means for added online competition on the links but also as a way to unlock new character costumes and color variants every month. This is obtained by reaching the A- rank through playing matches.

Considering each match pits four players against one another, is only three holes, and you can’t lose points even if you finish dead last, it’s not that long of a grind to reach the A- rank. At most, it may take 2-3 hours for less-skilled players. Performing well in a match, whether that’s winning outright or scoring under par, as well as simply participating earns you points.

You begin in the C-ranks and work your way up. There are four different categories to progress your rank in: Standard Golf and Speed Golf, and using button or motion controls in either. You only have to reach A- rank in one category to earn a given month’s reward. For this first month, the reward is three differently colored Yoshis in blue, red, and yellow varieties.

Generally, when you enter Ranked Play, you’re matched up with three other players who are around your world rank and who are geographically close to you. If there is no one around who fits these categories, the game does a little stretching, adding in people who might be outside of your general area or be outside of your rank. Though if they’re a higher rank than you by a considerable amount and you win, you earn bonus points at the end of the match.

Ranked Play has set rules each month (“No Mii Characters”, “Special Shots: On”, etc.), and the course played on in Ranked Play alternates between a selected pool quite regularly. Thus, you’re never stuck playing on one course for too terribly long in a given Ranked Play category.

Overall, Ranked Play is a wonderful mode that I didn’t even know I wanted or needed. It’s still my hope that online tournaments return from Mario Golf: World Tour, but in the meantime, this is a nice addition all the same. I can easily see myself returning to Mario Golf: Super Rush with updates like these on a monthly basis, if only if it’s just to play Ranked Play until I reach A- rank to unlock the latest character costume or color variant.

If Nintendo and Camelot can continue to put out new content like courses like New Donk City at a fairly regular pace, I really think Mario Golf: Super Rush could be one of the best entries — if not the best entry — in the Mario Golf series to date. I was originally struggling to find a reason to return to Super Rush due to the game’s lack of content at launch, but with updates like these, I will most likely make many return trips to the links.