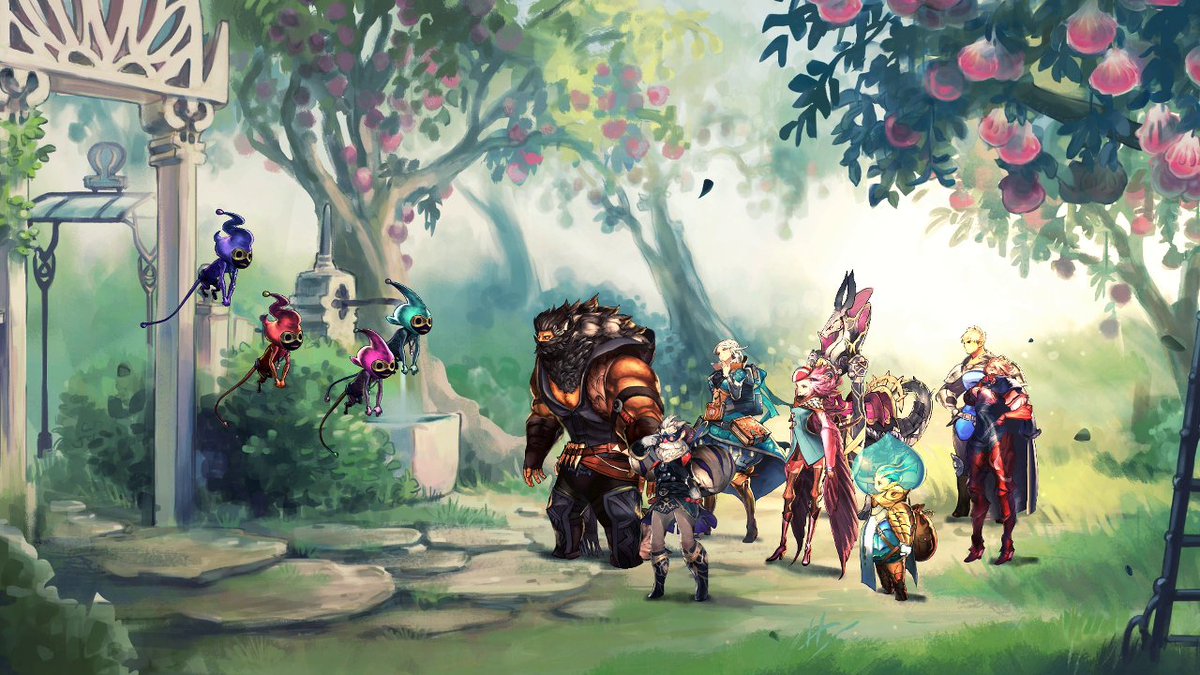 It doesn’t take much to convince me to check out a new JRPG. I love the genre, even if I can be picky about what I play at times. But show me a JRPG with a light watercolor palette and pretty hand-drawn art, and I’m sold. Bonus points if you tell me that it’s being worked on by members of the teams that made Final Fantasy, NieR: Automata, and Bravely Default. That’s exactly what Astria Ascending is, but during my time with the preview build, I couldn’t help but feel like the game was buckling under its own weight.

Right off the bat, Astria Ascending makes a hell of an impression. I was immediately drawn into its very aesthetically pleasing world, thanks to the gorgeous line art and detailed environments. It looks way too similar to VanillaWare’s own distinct art style to be considered truly unique, but hey, having your game look like a VanillaWare game isn’t a bad thing at all.

The voice acting does leave a bit to be desired, but the character designs are simply beautiful, and the story setup is intriguing, too. Your party is made up of eight Demigods who have been chosen to protect and save the world before inevitably marching off to their deaths once their three months are up. It’s a grim setup, but one that’s immediately interesting as it sparks up all sorts of discussion about how much these characters value their lives against the safety of the world.

It’s a great premise and the game looks pretty, but unfortunately that’s about all the praise I can give to Astria Ascending. Past that strong first impression, I quickly found myself getting a little overwhelmed with everything the game started throwing at me.

There’s barely any time to get properly acquainted with each of your main characters because they’re pretty much all thrown at you right from the get-go. Having so many characters to play around with is nice, but introducing them all at the same time might be a bit too much. Add in the fact that they all have special abilities you need to learn, and you might even feel discouraged from experimenting with them all because there’s just so many.

And on top of them, each character gets a main job, sub job, and a support job that you can assign to them. Jobs and dual-classing systems are always a fun time, but again, Astria Ascending throws too much at the player too soon that it’s difficult to wrap your head around everything before you’re thrown into your first dungeon.

Because the game is presented on a 2D plane, this lends itself well to some light platforming and puzzle-solving sections in the dungeons. The dungeons themselves are pretty, the enemy designs are pretty striking, and the combat’s pretty much what you’d expect.

The battle system takes inspiration from other popular JRPGs like Bravely Default and Octopath Traveler, where you can earn Focus Points during battle to boost your abilities. Successfully hitting an enemy’s weakness will reward you with Points, which can be used to enhance your skills and make them more effective.

On the flip side, hitting an enemy with the wrong attack could heal them up and you’ll lose your chance to rack up Points. If you enjoy turn-based combat in your JRPGs, you’ll likely feel right at home in Astria Ascending.

As I neared the end of the preview build, I was left feeling somewhat indifferent towards the game. Perhaps the preview just wanted to give me a taste of the gameplay mechanics and its expansive world and job system, but in doing so, it’s inadvertently left me feeling overwhelmed with no desire to dig deeper into its systems because I don’t have any attachment to any of its eight characters in the first place.

It’s entirely possible that the final release could do a better job of easing the player into things, but right now, it’s just a little bit too much.