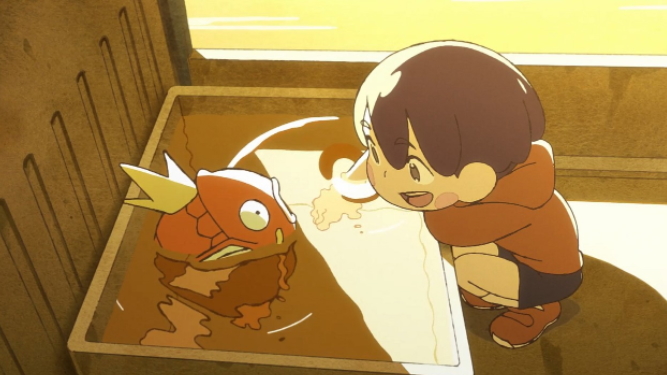 Studio Colorido has created the fourth Poketoon short animation released on the Pokemon Kids TV Japan YouTube channel. This one is all about the bond between a child and a Magikarp, and it really tugs at your heartstrings.

It’s called “Wait, Magikarp!” and the entire story is told through art and music. There are no words spoken, but the story very clearly unfolds throughout the six-minute-long animation.

The video starts with a child playing the flute at the lake, which captures the attention of a Magikarp. As a result of this, the pair forms an immediate connection. The child tries to take the Magikarp home with him, but his parents won’t allow him to keep the Pokemon, and it must return to the lake.

After that, the two become separated, but the Magikarp remains determined to meet the child again and hear him play the flute once more, knowing they shared a strong connection that day.

We won’t spoil the ending, but it truly captures the bond between a trainer and their Pokemon in a unique way.

It’s amazing how the story can be told with no words spoken. Also, Magikarp is a totally expressionless Pokemon, which would make you wonder how it can show any emotion in an animated video like this.

You’ll have to watch for yourself to see what we mean when we say it will bring you to tears. Be sure to watch with the volume up to hear the chilling flute music as well as that is an important part of the storytelling here.