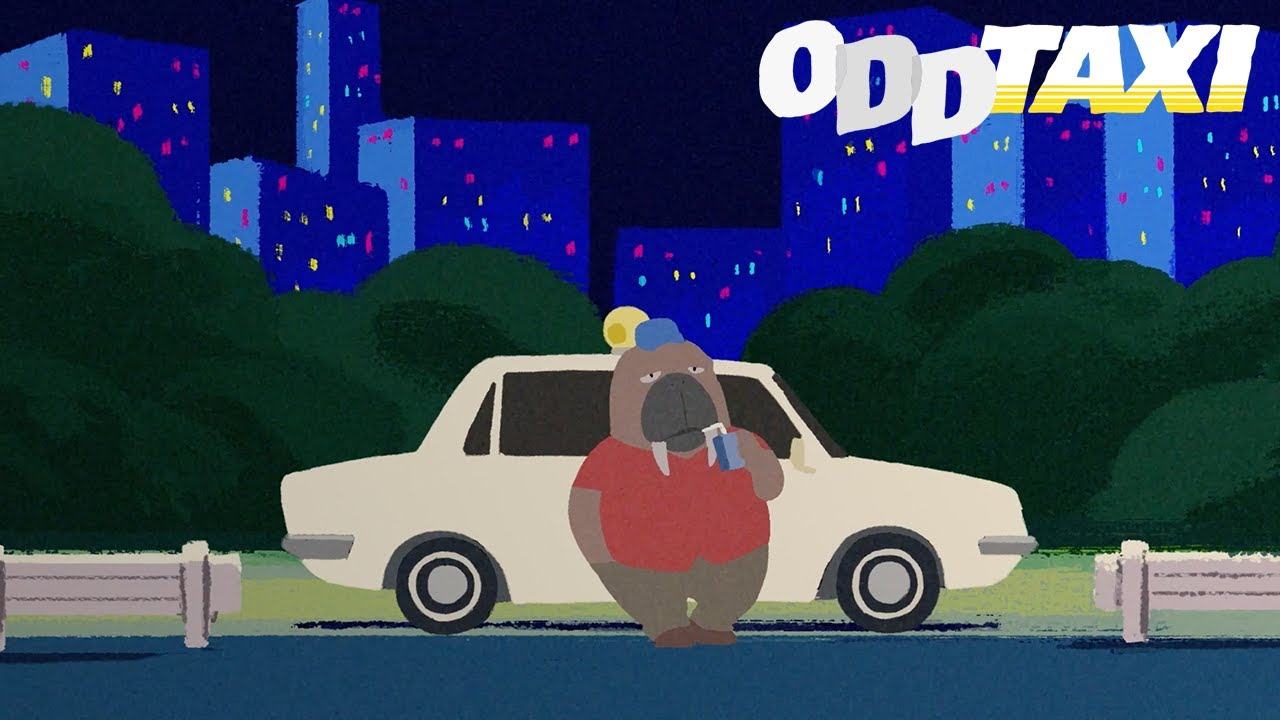 Spoiler warning: The following article contains minor spoilers for Odd Taxi Season 1. If you’re interested in checking it out without any spoilers whatsoever, come back after you’ve watched it. If you’re curious about the show but still need convincing, or just don’t care about spoilers, then continue.

On the surface, a show about an anthropomorphic walrus driving a taxi might not seem like the most exciting concept for a show, however unique it may sound. And yet, Odd Taxi has managed to be one of the most enthralling debut anime to come around in the last decade.

The premise starts simple enough, with each episode following the daily routine of our walrus taxi driver, Odokawa. He picks up an array of diverse animal inhabitants on their respective journeys throughout Tokyo, each with their own distinct personalities and stories.

His passengers include a young hippo trying to go viral on social media, a skunk obsessed with pop idols, and even a boar and horse comedian duo preparing for a show. Each ride tells its own story as we get to know characters through conversations they have with either one another or Odokawa.

Odokawa always steals the show whenever he’s a part of the conversation, as he manages to be both reserved and eccentric at the same time. A good example of this can be found in the interaction he has with his first customer, Taichi.

At first, Odokawa comes off as standoffish, taking a full minute to contemplate an answer to a simple question and calling Taichi’s social media activities pointless. By the end of the ride, though, the taxi driver has the hippo laughing and asking for a selfie simply because he cared enough to have a meaningful conversation about his interests.

This serious yet compassionate and inquisitive nature results in such an interesting character, as Odokawa comes off as blunt yet caring. This only rings more true as the season goes on, with Odd Taxi evolving from a slice-of-life show about a taxi driver to a mystery with several branching narratives.

It all starts with the disappearance of an idol pop singer that Odokawa drove not too long before she went missing. At first, it is implied that he is responsible, with cops asking him questions and an odd interaction that occurs at the walrus’ home that implies he has someone in his closet.

The lack of evidence pointing to the fact that he didn’t do it doesn’t help his case either, so there is a small part of you that begins to wonder: Maybe this seemingly unassuming 41-year-old walrus is actually a serial killer.

The more you get to know Odokawa, though, the less likely it seems. The show conveys that however awkward he may be around people, he genuinely cares about those around him and that there is no way he could ever kill someone. Yet, even though he doesn’t seem like the killer, the question of whodunnit still lingers.

And just when you’re going to get the answer, Odd Taxi throws in multiple curveballs that cause somewhat of a distraction to the pop idol’s disappearance and Odokawa’s involvement.

Instead of just a missing girl, Odd Taxi now has mysteries surrounding bank heists, a gunman hellbent on revenge, and badger games run by the mob, just to name a few. Seemingly minor characters and plots are also brought back to play essential roles in the plot, with some even becoming point-of-view characters that get as much screen time as Odokawa.

Remember that hippo that took a selfie in episode 1? He is now an important figure trying to take down one of Odokawa’s main antagonists. How about that guy that got his phone broken at the end of an episode? He gets an entire episode devoted to him and an arc that changes the entire landscape of the story.

As Odd Taxi progresses, you come to realize that every character, interaction, setting, and conversation has its purpose in the plot, no matter how minor they may have seemed at first. Every question that gets asked eventually gets an answer that makes sense, with just about every character getting their own full arc that closes by episode 13. This is especially true for Odokawa.

This walrus goes from a normal taxi driver to essentially a detective by the end of the show, conning mobsters into thinking he’s working with them while also doing his best to save his friends. It’s an amazing journey that both makes sense and tells a heartwarming tale of growth and tragedy.

Overall, Odd Taxi is a fascinating anime that manages to develop its characters and stories in seemingly unconnected ways, only to bring it all together by the end. Anyone who is on the fence about watching Odd Taxi because it looks a bit out there should definitely give it a shot.

This show boasts one of the tightest plots and coolest worlds of any debut anime to come around for a long time, and it seriously deserves more attention.