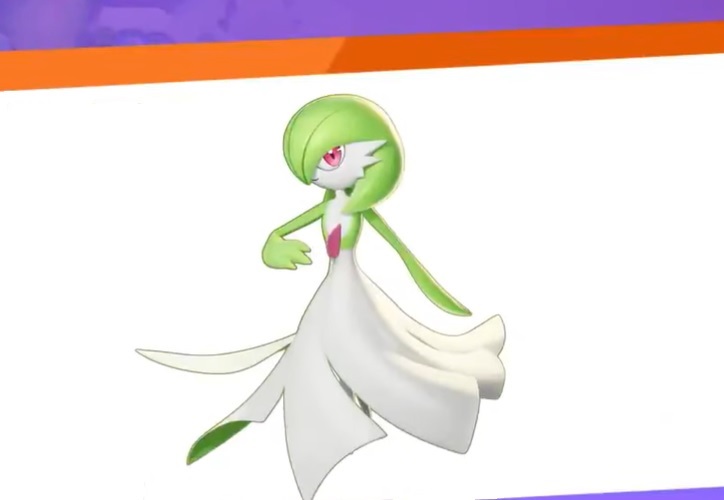 Earlier today, the official Pokemon Unite Twitter account announced that the Embrace Pokemon, Gardevoir, will be coming to Pokemon Unite tomorrow (July 28). Gardevoir will be the first Pokemon added to the game since it launched on the Switch just one week ago.

The announcement didn’t say too much about Gardevoir itself, but it was revealed that they’ll be a Ranged Attacked. If you’ve played Pokemon games in the past, then that was to be expected from this creature that mainly uses special Psychic and Fairy attacks.

A short 34-second-long trailer was also released alongside the brief announcement. This short video showed off Gardevoir’s standard attacks as well as two moves. The standard attack is ranged and appears to spawn purple stones above the target and slam them down to the ground. If your opponent is fast enough, they may be able to dodge part of the attack. In the trailer, Pikachu can be seen moving out of the way before the attack lands.

Next, a move is showcased which has many different moving parts. First, Gardevoir fires an orb of energy in a straight line. Then it’s shown that if the attack doesn’t KO an opponent, it will instead temporarily stun them. And the biggest boon of all is that when the move lands, a temporary shield is put around Gardevoir that blocks special attacks. There’s no indication of what happens if the move misses or if the shield will block physical attacks.

The last move shown forms a circle in front of Gardevoir with a ball of energy in the middle. It covers a wide area, but it’s unclear how much damage it deals. It’s also unclear if this is just another one of this creature’s moves or if it’s a Unite move.

You can see the official tweet and Gardevoir gameplay trailer from the Pokemon Unite Twitter account down below. And while you’re here, don’t forget to check out all of our guides and coverage on Pokemon Unite.