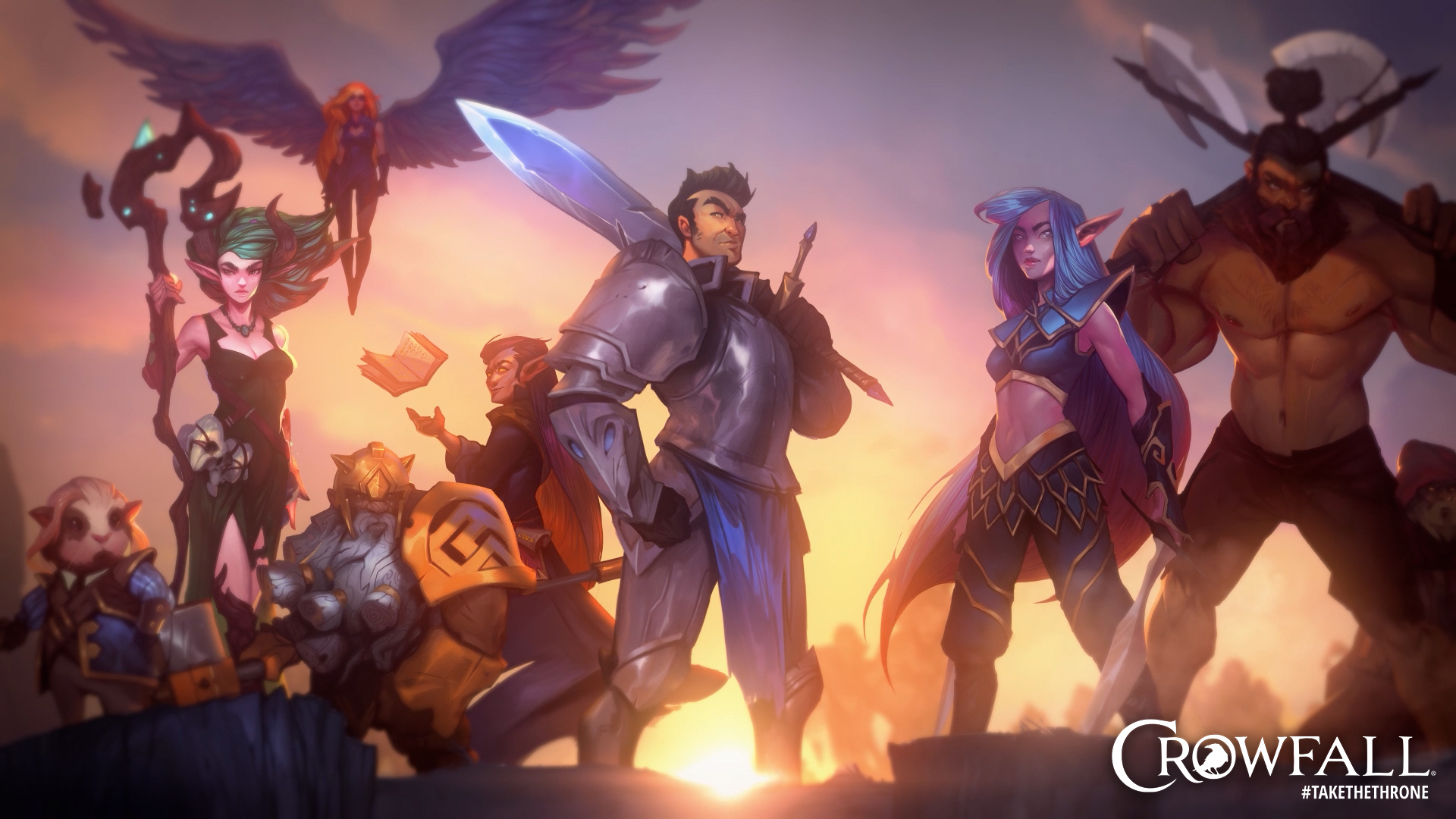 The upcoming PvP-centric MMORPG Crowfall is finally approaching its release next week, and the gauntlet has been thrown.

The game has been a long time in the making, after it was funded by a successful Kickstarter campaign in 2015, with fans pledging $1,766,204 to the cause.

To know more about what fans and new players can expect from its release and the future, Twinfinite interviewed creative director and ArtCraft co-founder J. Todd Coleman.

Giuseppe: We’re very close to the game’s release. How is the atmosphere at the studio?

J. Todd Coleman: Well, “at the studio” is still a bit of a misnomer, since we’re all still working remotely — but overall people seem to be holding up pretty well. This is my 4th MMO launch (Shadowbane, Wizard101, Pirate101 and now Crowfall) and the feeling is similar, but a little different, every time. Shadowbane was so early that it felt like a terrifying roller coaster drop into the unknown; hard to know what to expect so few people had ever been through an MMO launch before.

Wizard101 and Pirate101 were both eerily calm, probably because they were pointed at such a different target audience. Crowfall is a strange mix of both feelings — there is the excitement (and stress) that comes with launch, but it has this kind of “otherworldly” feel to it since the team is entirely remote. It sort of feels like you are watching from a distance… which is literally true, I suppose, but the level of focus and effort is still there.

I should say that I am exceptionally proud of this team for what they have accomplished. Launching an MMO is a monumental challenge even in the best of situations. Doing it in the midst of a pandemic, with the entire team working from home, adds a layer of complication that I never expected.

Giuseppe: What are the most important learnings from the beta that you’re going to look to implement after the game’s release?

J. Todd Coleman: I think the immediate goals after launch are going to revolve around scale. We have a fun game, and we know it works. Beta doesn’t provide you the sheer numbers that you need, though, to find out where the rivets are going to pop under extreme pressure. This touches everything: the registration and install process, the new user experience, server scalability, economy balance, distributing player load… everything.

One of the key things to keep in mind with Crowfall that makes it so different from other titles is that we, the developers, are not in control of this universe. The players are. Most games follow the World of Warcraft model, where the game world is entirely static. The monsters and the NPCs and the quests are all just hanging out, waiting for players to show up. If they do, great. If not, well, same difference really. The simulation is not really dependent on (or particularly influenced by) the presence or actions of the players.

Crowfall is the opposite of that. The actions of the players, creating and destroying and allying and betraying… that IS the game in Crowfall. It’s a completely different model. It’s really cool to think about, and I believe it’s revolutionary in many ways — but it’s also incredibly hard to test because players are, by their nature, unpredictable.

The biggest lesson we learned from Beta is that we need to “be nimble”, because we don’t know what the players will do with this universe that we’ve built for them. The cool thing about Crowfall is the universe will be constantly changing from the moment it goes live. The fate of this universe is, quite literally, in the hands of our players. Since we can’t predict what will happen, we need to be ready to make changes quickly.

Giuseppe: Roleplayers tend to be a very important part of an MMORPG’s community if anything because they make their own content and they’re not as sensitive to the up and down of new content releases. Do you have plans in place to support and encourage the growth of the RP community in Crowfall?

J. Todd Coleman: In a game like Crowfall, it isn’t just the roleplayers — every player in the game is helping to shape the universe and creating content for the rest of the community. To this end, we already go further than well, pretty much any game I can think of outside of moddable games like Minecraft (which are almost more like platforms at this point, honestly).

You can invite nobles to hold land, and vassals to own buildings. Those buildings can offer crafting stations and player-owned vendors who can sell goods while you are offline. You can host PvP tournaments or build a massive player-run market. We have a terrific, incredibly flexible foundation for user-generated content. Post-launch, I expect that we’ll continue to push that advantage in ways that are compelling and unique.

Giuseppe: Crowfall is known as a PvP-specialized MMORPG. Is there room within the game for players who enjoy PvE exclusively?

J. Todd Coleman: The core of Crowfall is really about player agency. PvP is one of the ways that player agency surfaces — for other players, that agency might come through the crafting system (becoming a grandmaster weaponsmith or stonemason), or by creating and ruling the largest and most awe-inspiring player-owned kingdom. In a dynamic universe, where the experience is not on rails, opportunities abound for players to write their own stories.

That said, Crowfall is NOT a game about co-operative PvE raid content. There are plenty of games out there that already provide that experience, and do it very well. We decided instead to focus on large-scale siege battles, dynamic city building (and destruction), and alternate systems like crafting, resource production, and caravans.

Giuseppe: You’re going to get a lot of new players at launch. How much have you been focusing on the onboarding experience to make sure they have a smooth entrance and a smooth impact with the established community?

J. Todd Coleman: Thanks — we certainly hope so! We just spent the last six months (or so) revamping the new player experience. The challenge with a game like Crowfall is that it is SO different that it is very hard for players to understand it, that is why we wanted to build a new player experience that offers that guidance for players. Our focus on the new player revamp was to use traditional questing to guide the players through all of the different interlocking systems that make the game work.

Even our architecture is different. In a traditional MMO, characters are locked into a “Realm” and every realm is an identical instance (copy) of every other Realm. Crowfall isn’t like that. Characters are created in the lobby and they SELECT a world to go into. Every world can be different: the maps are different. The rules are different. The import and export of items in and out of that world (what we call the Embargo) is different. The worlds aren’t all permanent, either — sometimes you log into a world that might offer unbelievable resources, but the world expires in a week. So you have to scavenge for resources and fight other players for the right to export those items back to the rest of the game.

These time-limited servers (in the game we call them ‘the Dying Worlds’) have a strategy game that plays out over the lifetime of that world — typically 1 month of calendar time. Players can win rewards on 4 vectors: Conquest (capturing and holding the most territory over the course of the campaign), or earning Glory, Wealth, and Power by completing tasks for the Gods. These work almost like guild-level quests; common goals that are randomized each season for you and your guildmates to try and accomplish head-to-head against the other guilds who chose to join that particular server.

Giuseppe: What kind of pace for updates are you aiming for after release?

J. Todd Coleman: As I said above, I think our biggest challenge going into release is to “stay nimble”. This means that we’re going to have to be very proactive about looking for — and jumping on — launch issues as they happen. By definition, that means that our release schedule may be a bit erratic, as it’s impossible to know exactly what challenges we will face until we see them arise. Once launch settles down, hopefully, we can get back into a fairly normal cadence of updates, as we did throughout the course of both Alpha and Beta.

Giuseppe: I’m old enough to remember the time in which MMORPGs were considered one of the most popular genres, at times with multiple AAA releases in a year. Then a series of flops pushed the genre into a bit of a niche. Do you think there will ever be another golden age for the genre?

J. Todd Coleman: I don’t really see it that way — to me, it looks like the best features of MMOs have bled outside of the MMO genre to be absorbed into every other kind of game (and platform) out there. Persistence, progression, chat, friends lists, guilds…these used to be “MMO features” but now they are just “game features.”

Giuseppe: Nowadays MMORPGs on consoles are certainly a lot more widespread than they used to be. Are you considering expanding to other platforms beyond PC?

J. Todd Coleman: I would love to see Crowfall migrate to other platforms. The success of other titles (ESO, World of Tanks, etc) have shown that a market is there, so hopefully, that is something we’ll get the opportunity to look at once we are on the other side of launch.

J. Todd Coleman: Yes, thanks! I want to share our gratitude to all of the players who believed in us, as far back as Kickstarter, and gave us the opportunity to make this game.

Crowfall is a big project — small by MMO standards, but much bigger than you typically see from a small, independent studio.  There is a bit of a “no man’s land” when it comes to MMO development; small studios can’t afford to take big risks, and big studios aren’t willing to try and do crazy things. Your support gave us a chance to take this risk, to make this dream a reality. Thank you for supporting us, and thank you for giving Crowfall a chance.

Crowfall is going to soon release on July 6, exclusively for PC. If you’d like to see more, you can check out the latest trailer.