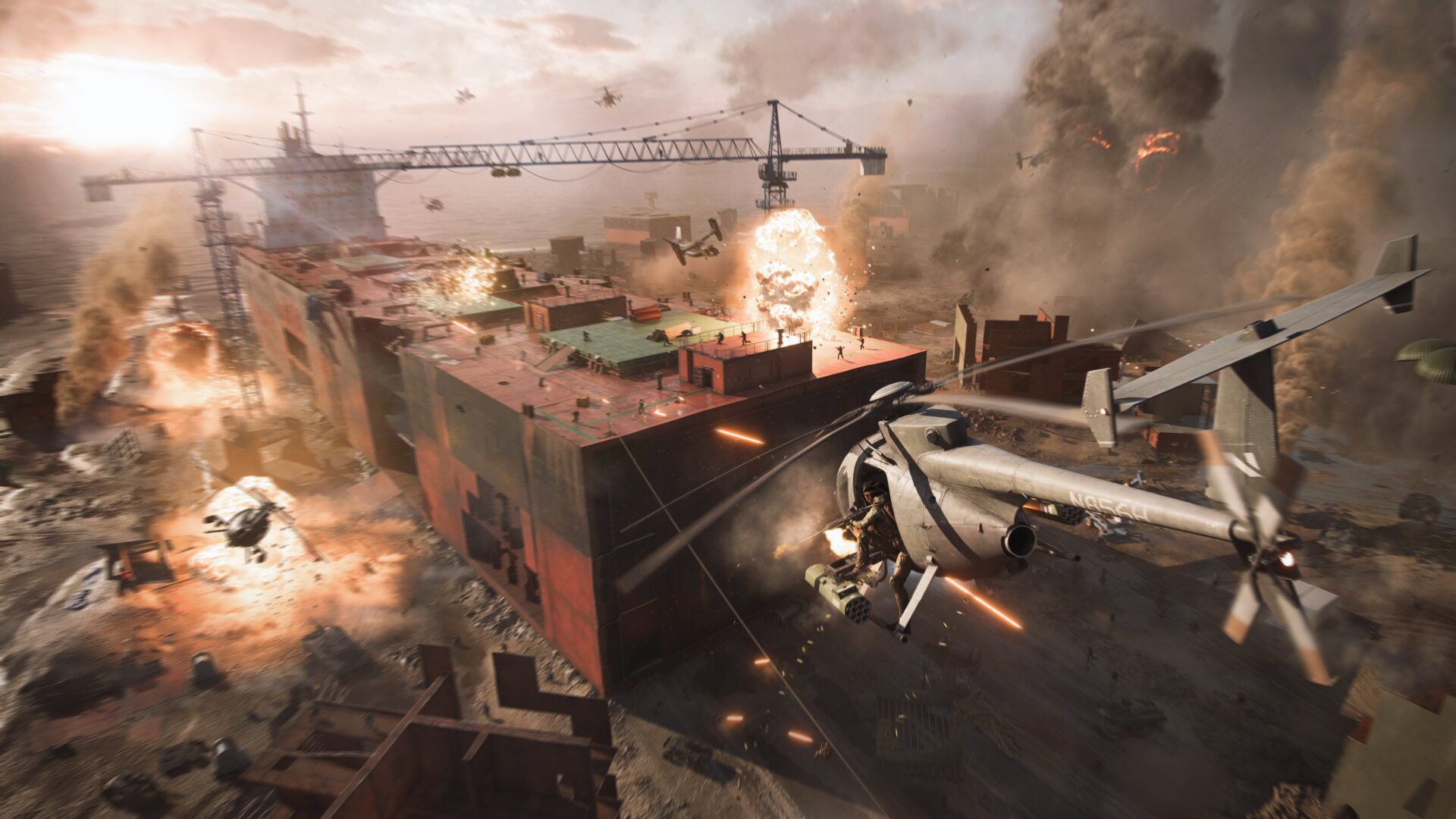 Today, EA Dice formally revealed the latest game in the Battlefield series, Battlefield 2042. The game will focus on what EA Dice believes is the core Battlefield experience, large-scale and intense multiplayer action with no story campaign available. Battlefield 2042 will release on Oct. 22.

Taking place in a grim future where climate change has caused food and water shortages, Battlefield 2042’s world will see many people all over the world have been displaced in search of a way to survive. Refugees worldwide have adapted and banded together to survive this new world as the government can no longer be relied on. These people are known as non-patriated AKA “nopats.” Among the nopats are former soldiers.

The strain of this new world eventually pulls Russia and the United States into a global war and recruiting these ex-soldier nopats is the key to swinging the war in their favor.

Battlefield 2042 takes place all over the world and this is reflected in the game’s map pool. Players will be able to fight in the following maps:

While these maps all vary in size, in general, Battlefield 2042’s maps will be much larger than previous games’ maps as the current-gen and PC versions of Battlefield 2042 will feature up to 128 player battles (64v64). Irreversible, in particular, will be the biggest map in Battlefield history.

Last-gen versions of the game will contain all of the same features and maps, but will not be able to handle the full 128-player experience; instead, they will feature a max of 64 players. The maps will be tailored a bit smaller to suit the lower player count.

What’s particularly interesting is that it’s confirmed that at least some maps will feature environmental hazards such as twisters that can rip through the map forcing players to adapt as it destroys the land below. Players can equip new gadgets such as wingsuits to help them navigate obstacles such as twisters.

Staples such as land, air, and amphibious vehicles will of course return as will classes known as specialists. Currently, the known specialists are Assault, Support, Engineer, and Recon; Battlefield 2042 will launch with a total of at least ten. Specialists in Battlefield 2042 will be defined by a unique primary gadget rather than weapons. Specialists can use any weapon or non-primary gadget. Players can also change their weapon configs on the fly, swapping scopes and under-barrel attachments in battle as needed.

Battlefield 2042 will launch with three multiplayer experiences. Currently, EA Dice has revealed All Out Warfare which will feature two classic game modes: Breakthrough and Conquest. There will also be an AI multiplayer for anyone that wants to practice or just doesn’t like playing against other players.

There will also be a new mode called Hazard Mode that will receive more details later on but so far is described as “an all-new, high-stakes, squad-based game-type for the Battlefield franchise that is a modern take on the multiplayer experience that is distinctly DICE but very different from All-Out Warfare’s Conquest or Breakthrough modes.”

On July 22 EA Dice will reveal the next multiplayer experience and some time in early July a technical test will take place and will be available to some players.

A season pass will also be available and will push narratives, add specialists, and locations. There will be four seasons in the first year. Locations and maps will not be behind paywalls and premium tiers will focus on cosmetics.

Battlefield 2042 will release on PS4, PS5, Xbox One, Xbox Series X | S, and PC and will run on the latest upgraded version of the Frostbite engine. There’s no word yet on crossplay and cross-progress.