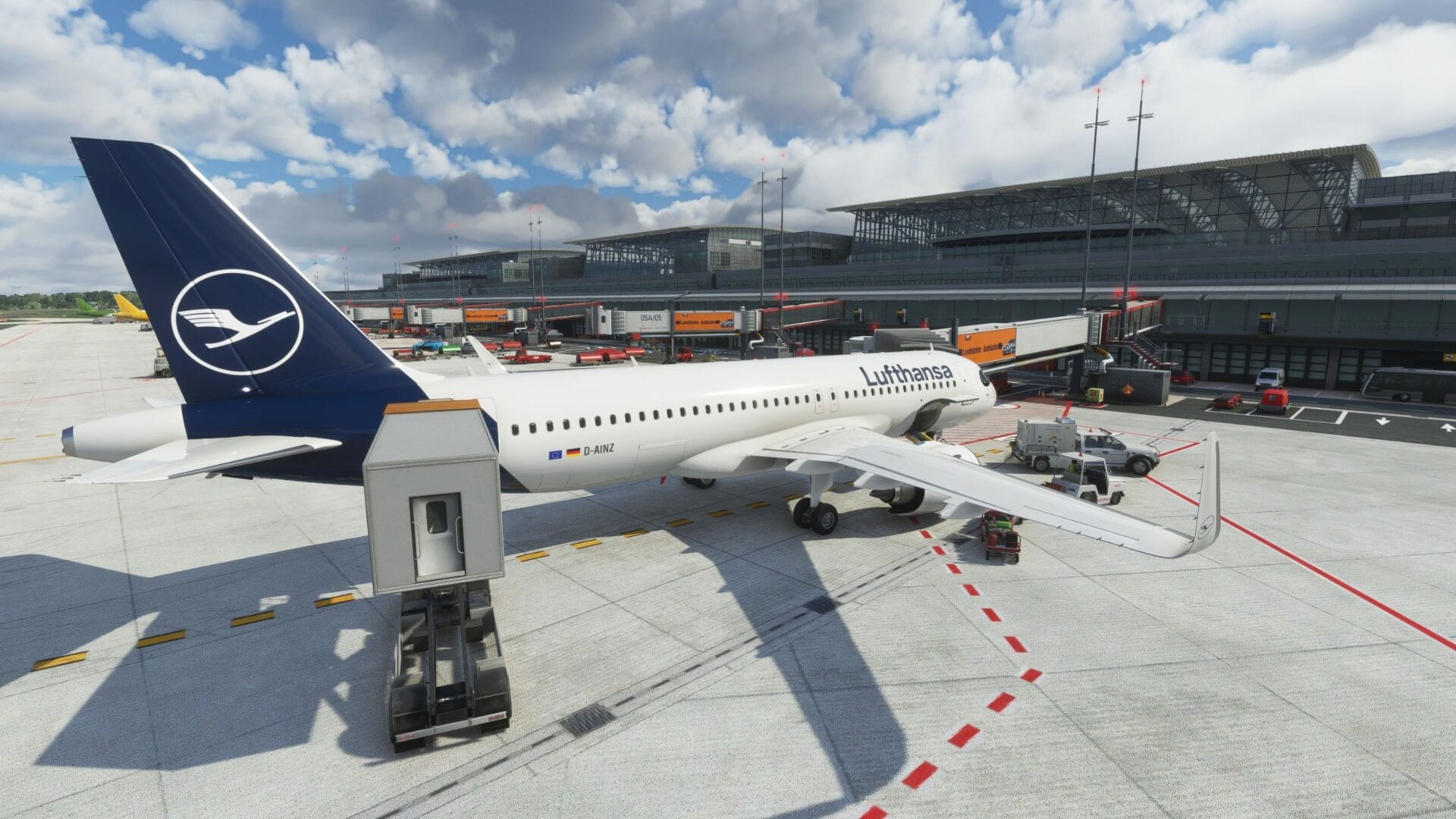 As the fifth busiest commercial airport in the country, Hamburg sees plenty of airline traffic, so it’s a great base if you’re interested in flying pretty much anywhere in Europe.

Being a relevant hub for Eurowings it sees a lot of traffic to and from smaller destinations popular among tourists but doesn’t host many intercontinental flights.

It also features a relevant Lufthansa Technik maintenance facility and its close proximity to the city (which features photogrammetry), means that approaches and landings are rather spectacular.

Landing on runway 23 is especially interesting: it offers a great view of the city, its massive port on the Elbe, and a glimpse of Airbus Hamburg-Finkenwerder airport beyond the river.

If you want to see what it looks like, you can watch an ILS approach to runway 23 just above and a full flyover of the airport below, showing it off in a variety of lighting and weather conditions.

The add-on can be purchased on Aerosoft’s store for €20,45 including applicable VAT.

It comes with its own installer and it can be kept up to date via Aerosoft’s updater, which is rather painless. As a bonus, it includes a full set of charts that is always a welcome perk in Aerosoft’s scenery packages for Microsoft Flight Simulator.

The airport is built on a very fetching orthophoto base that is both much more detailed than the default one and also blends very nicely with its surroundings. On top of that, a lot of effort has been dedicated to terraforming the elevation of the surroundings, with a great effect especially around the highways that look very realistic.

Sim-Wings did a very good job in detailing runways and taxiways. Materials and markings are a precise reproduction of the real airport, which is great to see for a hub of this complexity. Weathering is well done on concrete and tarmac, while some of the markings appear a bit too saturated.

Functionally, all approaches work correctly, and the taxiways are appropriately labeled, which means that you’ll receive useful guidance from ATC to and from the runways. AI aircraft also have no issue taxiing, taking off, and landing. One small issue is the usual missing ability to send for a fuel truck, which appears to be very common.

The VDGS gate guidance system isn’t active at the moment, but the developers promise to implement it as soon as the SDK offers a reliable way to simulate it.

A lot of work has gone into the 3D modeling and texturing of the many buildings surrounding the airport. The main terminal features basic modeled interiors almost across the board and it looks really great. As a matter of fact, the only areas that look a bit less spectacular are those left with opaque windows, which tend to feature lower-quality textures.

The custom jetways are some of the best I’ve seen in Microsoft Flight Simulator, featuring tons of details, crisp textures, and appropriate weather. Considering their position, they’re one of the most relevant pieces of an airport, and Sim-wings certainly did not neglect them.

The only small issue is that the animated stairs pop-in a bit too visibly when you get close, which can be slightly jarring. Perhaps this is an oversight with the models’ LOD, and if it is, I certainly hope it will be fixed.

There is a suitable amount of clutter scattered on the aprons, and the equipment isn’t generic. The appropriate models and colors have been used, adding another layer of realism to the scenery.

The landside area is very detailed, even thanks to the work on elevation mentioned before. The access ramps to the terminal, the parking lots, and the hotels all look very fetching. The level of detail achieved here is way superior to what’s featured in most add-ons nowadays.

Other relevant buildings like the Lufthansa Technik facilities and the towers are also beautifully reproduced. Even the roofs are very detailed, which is rare considering that they’re less visible from the aprons. That’s where many developers tend to hold back, but Sim-Wings spared no effort.

Plenty of additional elements provide a reason to explore the surroundings, including the iconic “Coffee to Fly” coffee house popular among planespotters and the old Lufthansa 707 near the fire station. The livery isn’t entirely correct, but I guess it’s good enough from a distance.

Unfortunately, the airport’s management has decided to remove the aircraft in the real world and to scrap it for parts in June, even if aviation enthusiasts are trying to save it. We’ll have to see what becomes of it and whether it’ll live on only in Sim-Wings’ scenery.

The scenery looks generally very good in the rain, even if there is room for improvement: the weather ignores roofs with the result that it rains inside. This is mostly unnoticeable during normal operations, but it’s worth keeping in mind.

Snow coverage is a weak area, with parts of the aprons completely clean and other areas that get “painted” fully white. This appears to be a common problem among many developers, but this certainly isn’t among the best Implementations I’ve seen.

Night Lighting is great on the aprons, with an absolutely top-notch job done on the runway and taxiway lights featuring all the appropriate colors. The floodlights are just perfect, and plenty of red anti-collision lights are correctly placed where they should be.

The lighting of many buildings shows a relevant weakness: the developers made a number of textures artificially “bright” at night, whether they are lit by a light source or not. Basically, they look quite unnatural in the dark, like the light was shining through the concrete, standing out way too much against the darker ground.

Texture artifacts also tend to be a lot more visible due to this implementation that caused the same issues with Sim-Wings’ Munich. Honestly, I really hope they stop doing this because their airports have great night lighting otherwise, and unnaturally lit textures impact the overall effect negatively.

Speaking of performance, Hamburg is very well optimized. On my PC (RTX 3070, Ryzen 9 3900x, 32 GB RAM) at 1440p resolution and Ultra detail settings, I lose only 2-4 FPS compared to the default scenery. This is extremely impressive considering the airport’s size and just how detailed it is. You can see the difference above.

In conclusion, Sim-Wings’ Hamburg airport is a great add-on for Microsoft Flight Simulator. It does have a few flaws that I’d like to see corrected, but they don’t detract much from the overall quality and scope on offer.

If you like flying airliners in Germany, this rendition of EDDH could be easily be defined asa must-have, especially considering the fact that it brings an absolutely massive improvement over the default version of the scenery in Microsoft Flight Simulator. 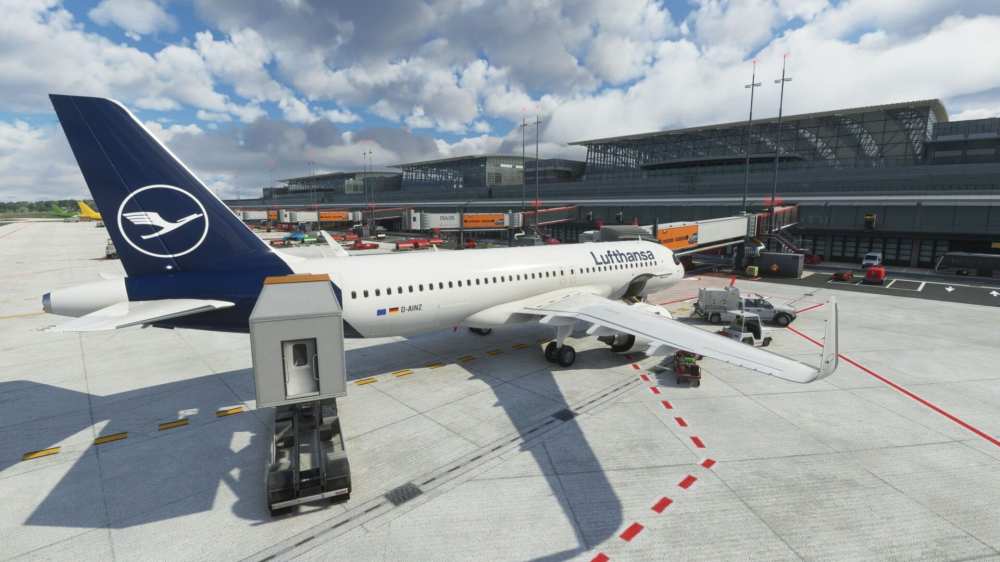