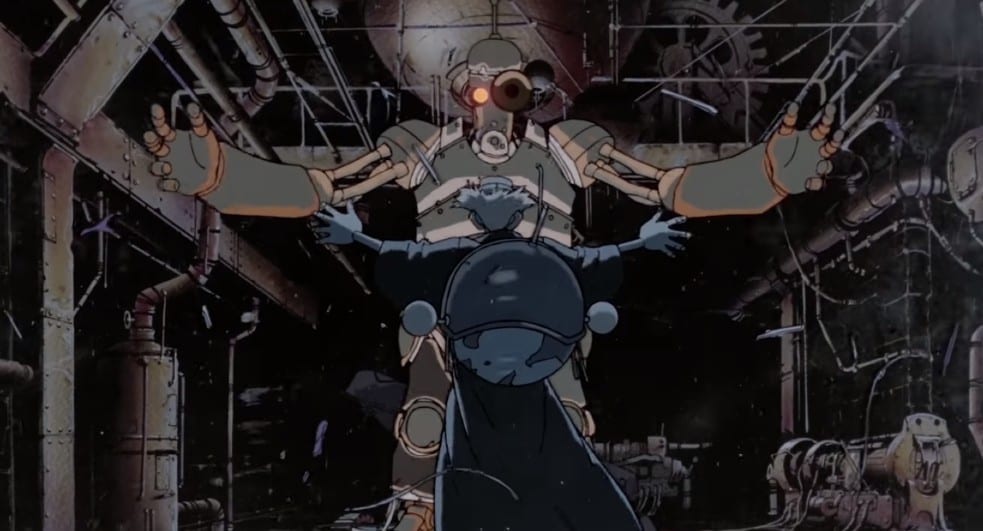 It was 30 years ago to this day that North America boar witness to one of the weirdest, most fascinating, and utterly beautiful pieces of animation ever created. Today, we celebrate the anniversary of the anime feature film Robot Carnival.

This collection of films tells nine different stories by different directors, each about, you guessed it, robots. The first short, simply titled Opening, sets the tone for the rest of the anthology, as a moving fortress that puts Howls Moving Castle to shame descends upon a poor desert town.

As the impoverished people take cover in their shacks, robots begin to burst from the fort in a transfixing display of colorful mayhem. Explosive robot dancers fly through the air and firework crackle as the castle plows over the town, all while a robot conductor directs the violent orchestra from above.

These few short minutes alone are enough to envelope even the stingiest of anime fans into Robot Carnival, as its vibrant and energetic animations still hold up to this day.

The shorts that follow are equally stunning, boasting their own distinct animation styles and plot that range between comedy and drama. What’s most impressive is that the majority of them manage to successfully convey their themes and messages without any lines of dialogue.

Instead, the stories are told through expressive animations that tell you what’s happening on the screen via body language and action alone.

Even though we never hear a word come out of her mouth, we can sense every emotion the protagonist of Star Light Angel feels because of how heartbroken she looks and acts throughout the film.

That detailed animation also occurs in the shorts that do have dialogue, making entries like Presence and A Tale of Two Robots all the better for it. Each short not only gets to convey their story both directly via dialogue but in-directly thanks to animation, which adds considerable depth to them overall.

The story of an android set out to rescue a young girl kidnapped by aliens wouldn’t have been nearly as captivating if it weren’t for its soundtrack’s synth-wave style. The music sets the tone for the action and amplifies the blistery combat and striking visuals, resulting in an amazing experience.

In retrospect, the entire roster behind the Robot Carnival is surprisingly stacked, especially when you consider that Katsuhiro Otomo, the creator of Akira, was one of the directors on the project.

Yes, that is right, the creator of Akira, a film heralded as a masterclass in animation, is responsible for part of Robot Carnival. To be exact, Otomo was responsible for the film’s start and end shorts.

Honestly, Otomo’s involvement alone should be enough to send any true anime fan scrounging about the internet in order to see Robot Carnival wherever they possibly can.

Heck, even if you aren’t a fan of anime, you’d be hard press to argue that you weren’t at least intrigued with how gorgeous the film looks, so why not give at least part of it a watch?

Anyone who does surely won’t regret it, as Robot Carnival still holds up as one of the greatest animated films ever created.