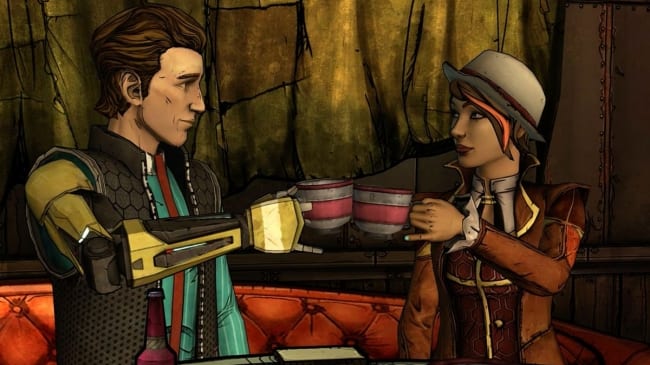 Tales From the Borderlands, the highly acclaimed story-driven spin-off title from Borderlands series developed by Telltale Games, is coming back to storefronts next week.

During the Borderlands Show livestream event held on Feb. 10, it was revealed that all episodes of the game would be available via a newly re-released collection for PlayStation 4, Xbox One and PC via Steam and the Epic Games Store. The collection will also be playable on both PlayStation 5 and Xbox Series X via backward compatibility.

The new collection will support any earlier saves players may have from the original episodes on their consoles, and saves can be carried over onto next-gen consoles via save transfers.

Gearbox also detailed the new Tales From the Borderlands collection for newcomers, describing it with the following blurb:

Fiona is a full-time con-artist who has been scheming to make a fortune selling a fake Vault Key. Rhys—who you might know from Borderlands 3 as the Atlas Corporation CEO—is an ambitious Hyperion employee who idolizes the recently deceased Handsome Jack and is in the market for a Vault Key.

The deal they strike goes bad in ways that could only happen in the Borderlands, wreaking all kinds of mayhem. How the rest of the story plays out is up to you, as you make choices during explosive action scenes and conversations with familiar characters like Moxxi, Zer0, Marcus, and Claptrap.

The collection is set to launch on Feb. 17, though the exact pricing hasn’t yet been revealed.

The collection’s release will mark the first time Tales From the Borderlands has been officially available since the closure of Telltale Games in 2018. Following the closure, most all of its games were delisted from retailers until their licenses were rescued by new publishers.

Tales From the Borderlands is set for re-release on PlayStation 4, Xbox One and PC on Feb. 17. For more on the game, check out our story summary to get caught up before diving back into the game.