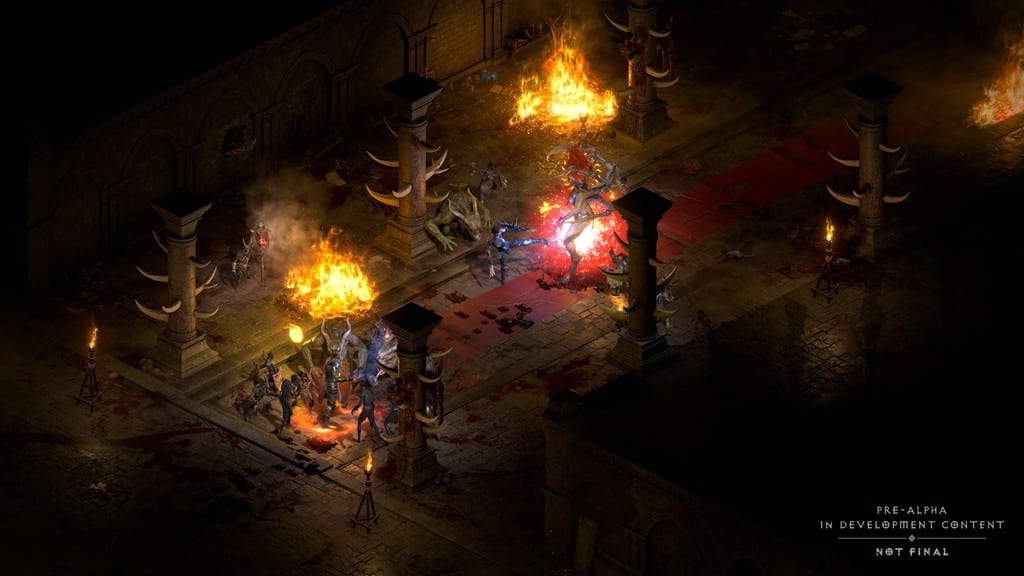 After what felt like years of shadowy rumors, winks, nods, and just general player anticipation rooted in nothing concrete, Diablo 2: Resurrected, a remastered version of the action-RPG classic, is finally confirmed.

Older millennials like myself that enjoyed loot-driven games back when Diablo 2 was in its heyday spent unholy amounts of hours doing the same things over and over again. Was it repetitive? Yes. Was it fun? Definitely yes.

Let’s look back at some fond memories of the Diablo 2: Lord of Destruction-era that we can’t wait to relive when Diablo 2: Resurrected releases.

Perhaps the most iconic grind in the early 2000s was found in Diablo 2: Lord of Destruction. Players like myself would load up magic find, movement speed, teleportation, etc. in order to plow their way through either Mephisto, Lord of Terror or Baal, Lord of Destruction, as quickly as humanly possible.

There was an art to this of course. You had to balance gear that was going to help you speed run it, with gear that would increase your chances of getting good drops with, of course, equipment that will let you survive and quickly defeat these bosses on the hardest difficulty that you could handle.

This, for many people, was the end game of Diablo 2. Diablo 2, especially earlier on in the Lord of Destruction-era, lacked fancy end games that modern games, including even Diablo 3, had.

Although it might seem mundane for the uninitiated, it was a satisfying gameplay loop for hardcore players that wanted to push themselves and see how fast and far they could go with their favorite characters and builds.

Another beloved feature of Diablo 2 was, of course, running through the level that did not exist… the Secret Cow Level. Moo.

The process of creating the portal for The Secret Cow Level was arguably just as iconic as the level itself. Players would need to find Wirt’s Leg –yes, an actually severed leg from an NPC in Tristam– and combine that with a Town Portal in the Horadric Cube while in the Rogue Encampment.

Do all of that, and you’ll open up a frightening home of the Hell Bovines led by The Cow King.

The Cow Level was a popular place to level up in the earlier days of Diablo 2 and is a consistent running gag within the series. I personally remember fine-tuning my Javason with an eye towards annihilating The Secret Cow Level.

Stressing Over a Hardcore Character

When regular Diablo 2 starts to become mundane I, and I’m sure many others, would enjoy mixing it up by creating a hardcore character.

Hardcore characters get one life. Death is permanent and it changes the way you approach building your character.

I can recall creating a hardcore Necromancer that focused primarily on just summoning as much undead as possible. The thought process was that I would put as much stuff in-between me and the hordes of enemies trying to kill me as possible.

Using this strategy I would slowly, but surely, chug my way through all of Normal and nearly all of Nightmare before tragedy struck.

I recall being up to Act 5 of Nightmare and disconnecting somewhere in an open field, I’m not sure if another player came in and PKed me, or if was monsters that got me, but either way, my Necromancer was murdered too soon. I didn’t touch Diablo 2 for years after that but I’m ready to give it another go now when Diablo 2: Resurrected comes out.

Speaking of PKing, one of the most charming and silly parts of Diablo 2 which never really translated all that well into Diablo 3 was dueling.

Players would spend hours working alongside friends to create their perfect killing machines and after murdering Diablo and Baal 10,000 times, some people were ready for the next challenge… your friend.

I’d spend tens or even hundreds of hours perfecting my builds and killing hordes alongside my friends, but there’s always that one buddy that wants to mouth off about how their character was better.

Fortunately, you could prove it by agreeing to duel. Sometimes battles were short-lived for just a few seconds, and other times they would drag on for minutes. In the end, though, the victor could claim the ear of their enemy and claim bragging rights until the rematch.

Dueling will be back in Diablo 2: Resurrected and unchanged from Diablo 2. It may not be balanced whatsoever, but it was still dumb fun.

One thing that was kind of odd about Diablo 2 is that Gold, the official currency, wasn’t all that helpful, at least in terms of the player economy. You needed to have some Gold around for upgrades and things like that, but the economy always revolved around value trading.

Players would advertise powerful weapons and gear that they had and tried to just wheel and deal them for something they wanted more.

One-for-one weapon and armor swaps were common, but over the course of Diablo 2’s history, certain items would be substituted as currency for Gold.

For example, Gemstones were a common medium of exchange, as were Runes. None were as famous as the Stone of Jordan, though, which for a long time was the unofficial currency of Diablo 2. Equipment was priced in how many SOJs they were worth to players, and players frequently worked out deals in SOJs, either going off of community established pricing of SOJs and swapping items with similar value or just selling weapons for SOJs to be used in a future trade.

It was pretty wild but fun, and It’ll be interesting to see how the Diablo 2: Resurrected’s economy takes shape.